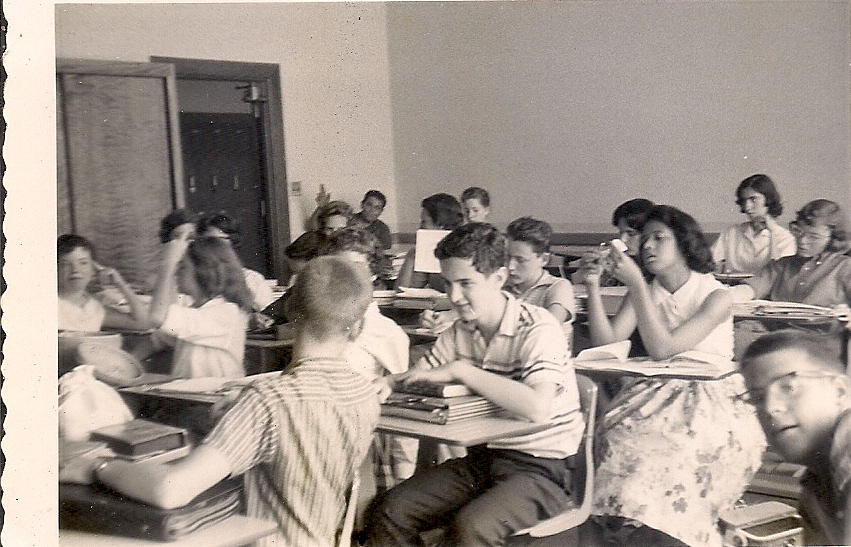 That’s me – the kid with his hand on the pile of books – as a freshman at Asbury Park High School in 1958.

Yesterday, I attended the 55th reunion of my Asbury Park (N.J.) High School class of 1962. It prompts me to write this week about my coolest extracurricular involvement there: with our student newspaper, the Megaphone. It was also, arguably, the birth of my writing/editing career. Unusually for a high school paper, we published the Meg every week. We were one of only two weeklies in the state; most high school papers were monthly or even quarterly.

In the fall of my freshman year, something that had happened the previous year prompted me to show up for the “try-outs” for a reporter’s spot on the Meg staff. My eighth-grade English teacher, Mrs. Stumpf, had asked the class to write a paper. It was the first time, as I recall, that I’d ever had a composition assignment. I must have earned an A, because I distinctly recall Mrs. Stumpf telling me that I had a talent for writing. I guess it went to my head, because it propelled me into the Meg try-outs the following year, and I still remember the compliment over 60 years later.

The try-outs were simple. A Meg staffer had taken apart a newspaper article and written out short sentences, each one giving a fact from the article, but arranged in random order, on a classroom blackboard. Our job was to turn those scrambled facts into a coherent story. I was one of those who did it well enough to be added to the Meg staff.

I began as a reporter but was soon given a regular feature – an interview column – to write. In my sophomore and junior years I was promoted into increasingly responsible editorial positions. At the end of my junior year, the outgoing editorial leadership chose me as editor-in-chief for the following year.

The Meg staff did a lot of work – not only gathering news and writing it up, but preparing editorials, features, sports reports, photographs and cartoons. And we had a business staff that went around to every classroom to sell the paper on Friday afternoons (10 cents a copy) and also beat the bushes to get ads from local businesses to keep us financially afloat (we got no financial support from the school). The school did, however, provide us with an office, which was a hive of activity every afternoon. We also had a faculty advisor, but he rarely made an appearance. We students did it all ourselves.

We made three trips each week to a commercial print shop in nearby Bradley Beach, which was still using linotype (a machine that created each “line of type” from molten metal). No computer word processing or layout in those days! When all the articles and ads were printed on “galleys” (long sheets of paper), we’d bring them back to school (or occasionally, to someone’s home, in the afternoon or early evening) and do a “paste-up,” cutting each article out of its galley, then laying out the articles, photos and ads on a blank page, and pasting everything in place, as straight as we could manage, with rubber cement. A sticky, stinky job! (When the paste-up was at my house, we worked on the Ping-Pong table.)

Being named editor-in-chief by the outgoing editors was the highlight of my junior year, but the really big cause for celebration came in my senior year. One Saturday a few weeks before graduation, accompanied by our managing editor, Steve Klitzman, and the incoming Class of 1963 editorial leadership team, I drove up to Upsala College in East Orange (northern New Jersey) for the annual Scholastic Press Association of New Jersey awards program.

We were stunned and overjoyed when it was announced that the Meg had been named one of the state’s Top Ten high school newspapers (actually No. 8) – an unprecedented recognition. The education editor of the Newark News, who announced the award, said something to the effect that he was amazed that any high school paper could do such a fine job every week. It still warms my heart when I think about it. The award was all the sweeter because in all the years I’d been on the Meg staff, SPANJ had always, to our great disappointment, given us a lackluster ranking (and, candidly, although I think my staff and I did a great job in our senior year, it wasn’t all that different from the work that had been done in the three previous years that my friends and I were on the staff). 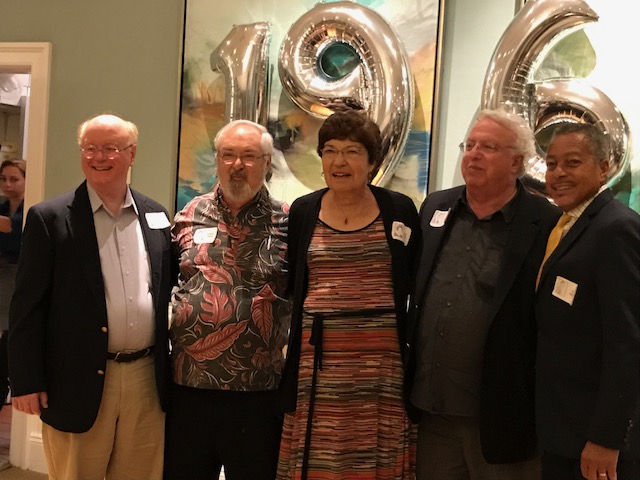