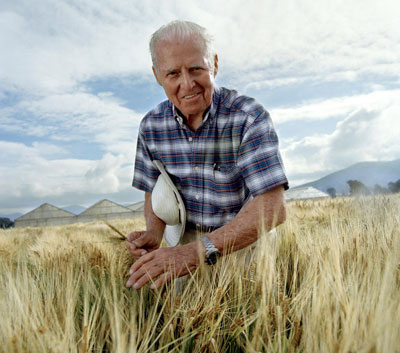 About a month ago I saw an online birthday tribute to a 20th century hero few people have ever heard of. On March 25, Norman Borlaug, an agronomist who passed away in 2009, would have celebrated his 104th birthday.

Borlaug’s work, say those who are familiar with it, saved billions of lives. It won him the Nobel Peace Prize in 1970.*

I first became aware of Borlaug when I was a Peace Corps volunteer in India, helping in an infinitesimally modest way to further the advance of the “Green Revolution” that Borlaug did more than any other human being to bring about.

Without Borlaug’s work, I’d probably have been doing something else, somewhere else – if there had been another Peace Corps opportunity for me.

What exactly was Borlaug’s contribution? Through old-fashioned plant-breeding** efforts, he painstakingly developed new, high-yielding varieties of wheat that have subsequently ushered in an era of abundant crops that are now adequately feeding much of the hungry developing world.

Borlaug’s wheat varieties combined several traits that resulted in enormous increases in crop yields. Traits like disease and drought resistance and shorter, stronger stalks, which meant that the plants were much less likely to fall over before ripening as a result of wind or rain. These new varieties were also much more responsive than traditional strains of wheat to irrigation and substantial applications of chemical fertilizer. Thanks to their widespread adoption in India, for example, average wheat yields tripled from about one metric ton per hectare (nearly 900 pounds per acre) in 1978 to three tons in 2000.

In India, I witnessed the Green Revolution myself. Local wheat varieties, “deshi wheat,” had been bred by farmers over the centuries for resistance to drought, the major threat to the crop. This meant there would almost always be something to harvest, but yields would be modest.

As I recall, the typical yield in the north-central area of India where I lived was about 10 maunds (820 pounds) per acre. Farmers who successfully followed the Madhya Pradesh state Agriculture Department’s “package of practices” – planting and irrigating at the right time and applying the proper dose of nitrogren-, phosphorus- and potassium-rich (NPK) fertilizers – achieved yields of around 40 maunds (about 3,300 pounds or 1.5 metric tons) or better.

Since then, in what later came to be called the Green Revolution, other agronomists developed similarly high-yielding varieties of rice and corn (maize) – major grains, along with wheat, that provide much of humankind with its “daily bread.”

In India, Borlaug began using several high-yielding wheat varieties he had bred earlier in Mexico. I recall one of them, Sonora 64. It ran into a problem in India though. People didn’t like the taste of bread made from it. So Borlaug went back to work with local agronomists, cross breeding Sonora 64 and other high-yielding Mexican varieties with Indian strains of wheat until they’d developed several varieties that produced high yields and satisfied local taste buds.

Borlaug was a thinker as well as a doer. Here are a few of his thoughts I believe are worth sharing:

If you love organic food and think genetically modified plants are the devil’s work, read no further. If you have an open mind, read on.

Finally, at the risk of offending a few friends, I’d add the following to Borlaug’s observations: Until the advent within the past century or so of modern, scientific agriculture, all farming – worldwide – was organic. It was practiced without chemical fertilizers, pesticides, weed killers or GMOs. Traditional organic farming gave humanity worms in our apples and ears of corn, and crop-killing “rust” and “smut” on our wheat and other grains (the staff of life). It also greatly limited crop yields even in the best of years, often causing hunger. Until world population growth finally peaks, hunger is a problem that policy makers must continue to address. Organic farming does not help address that problem. It just requires that we use a great deal more land to produce our food. Opposition to one or more elements of modern scientific agriculture actually has the potential to exacerbate hunger. For anyone with a humanitarian impulse, that’s worth thinking about the next time an anti-GMO measure appears on the ballot.

* When Borlaug won the Nobel Prize, his wife got the news in a phone call from a reporter. When she went out to the field where he was at work to tell him, he laughed it off, saying it was probably a prank, a practical joke. Later, of course, he took the prize more seriously, but still modestly: “When the Nobel Peace Prize Committee designated me the recipient of the 1970 award for my contribution to the ‘green revolution,’ they were in effect, I believe, selecting an individual to symbolize the vital role of agriculture and food production in a world that is hungry, both for bread and for peace.”

** Old-fashioned plant breeding has nothing to do with genetic engineering, which had yet to be developed at the time Borlaug was doing his groundbreaking work on wheat. Plant breeding involves patiently cross-pollinating various strains of a plant, each exhibiting different traits, in an effort to create a new variety that combines several desired characteristics. It also involves a great deal of waiting time, as plants grow and ripen, producing new seeds. This is the same process that, over the centuries, people have applied to dog breeding, resulting, for example, in the creation of Chihuahuas and St. Bernards, a far cry from the first domesticated canine.

Want to Have Your Palm Read? Me Neither!
Scroll to top