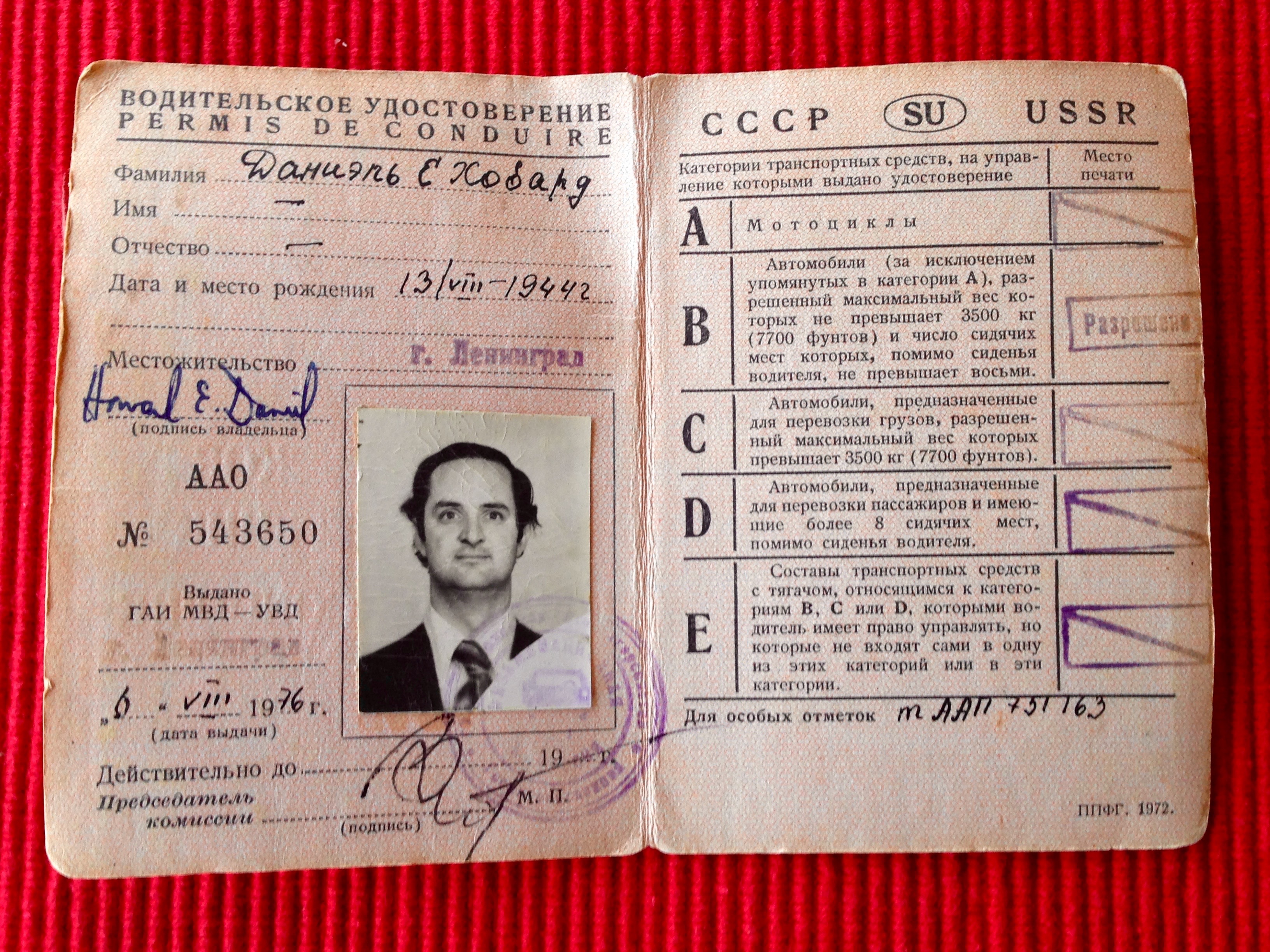 My Soviet driver’s license (and, yes, I certainly needed a haircut!)

I’ve just passed the written and vision tests needed (perhaps thanks to advancing age) to renew my driver’s license. The experience with the California Department of Motor Vehicles reminded me of a long-ago brush with Virginia’s DMV.

It happened in 1978, shortly after I returned to the United States following my assignment by the U.S. Information Agency to the U.S. consulate-general in Leningrad. Amid the hassle of the trans-Atlantic move, I realized that my old Virginia license had expired shortly before my return home, and that I’d need to get a new one. As I stood in the typically long DMV line,1 I imagined that I’d only need to show my expired license and pay a modest penalty in addition to the standard fees.

When I finally got to the front of the line, I was shocked to learn that my recently expired Virginia license would not be satisfactory evidence that I was qualified to drive. To avoid having to retake the written and road tests, I was asked to show a still-current license from another jurisdiction. No problem, I thought to myself, and I produced the license issued by the U.S. Army in Germany, which I had used back in 1975-76, when I’d been strengthening my fluency in Russian at the U.S. Army Russian Institute in Garmisch.2

No, said the DMV clerk. That license (which wasn’t due to expire for more than a year) does not authorize you to drive in Virginia.

Eager to avoid the tests, I played my last, desperate card. I pulled out my bright red – of course! – driver’s license from the USSR. “That will work,” the clerk said, to my happy astonishment. “We see these all the time.” Apparently, Soviet diplomats who live in Virginia, just across the Potomac from Washington, D.C., use their licenses from home when applying for a license to drive in the USA. 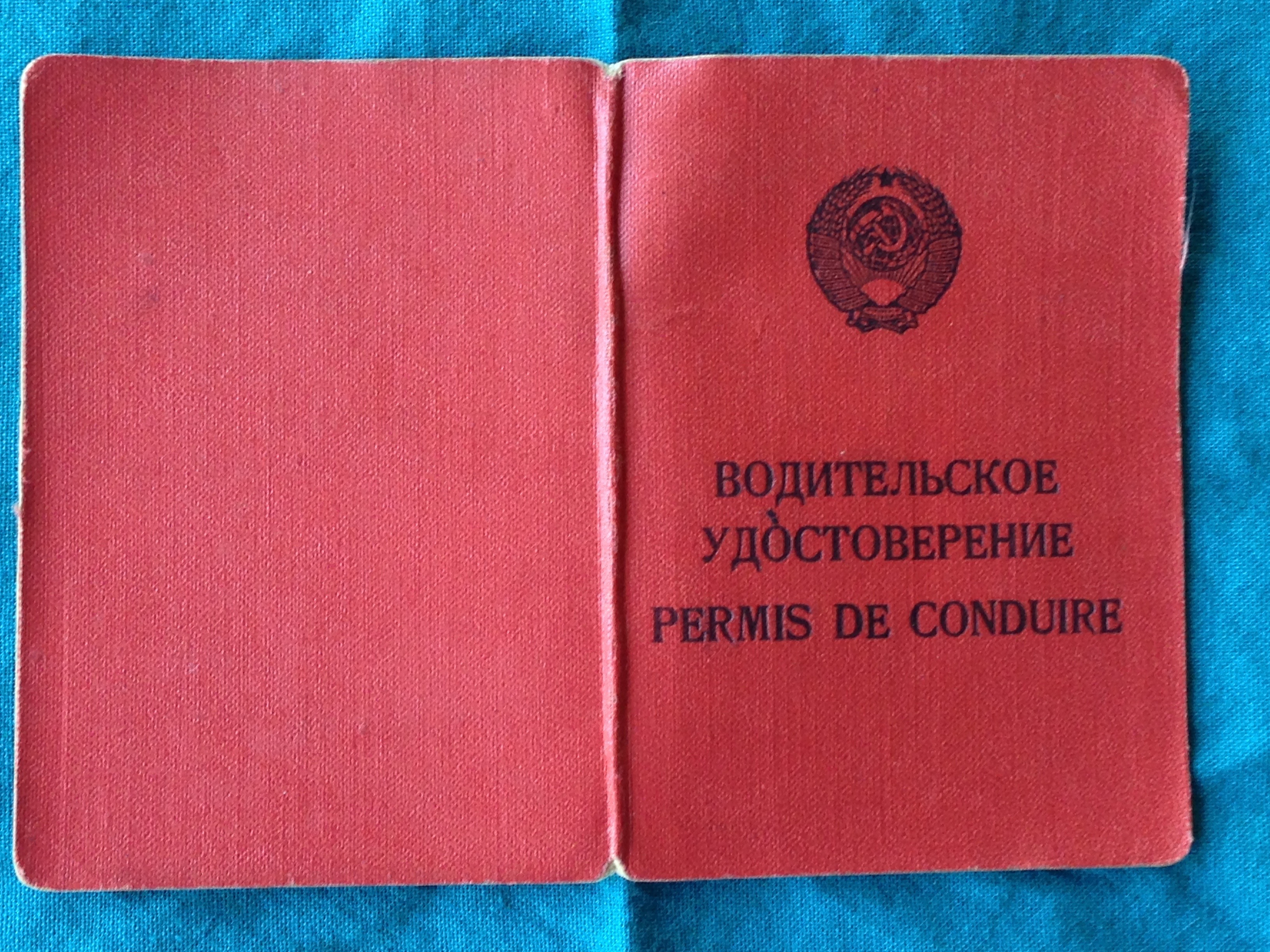 As can clearly be seen in the photo at the top, my Soviet license (which I’ve kept as a souvenir) had not a word of English. Nor an expiration date! But it was all the DMV needed to turn me loose on Virginia’s highways and byways. And save me from having to retake the tests.

1. DMV lines were invented in Hell. Once I was standing in a particularly long one, and as I was finally just three or four people away from the head of the line, the clerk behind the counter posted an OUT TO LUNCH sign, told everyone standing there to go find a place at the rear of any of the other three long lines, and shut the window.

2. As readers may know from previous posts on this blog, I’d studied Russian for four years as an undergraduate majoring in Russian area studies. In addition, I’d undergone two great fluency-building experiences – the first at Middlebury (Vermont) College’s Russian-language program the summer of 1966 and the second at Leningrad State University (LGU) the summer of 1967. Still, before the U.S. Information Agency would send me off to the U.S. consulate in Leningrad in 1976, it wanted to be sure my Russian hadn’t atrophied since I’d last used it (when I was researching two major papers as part of the master’s degree program in Soviet area studies at Harvard, 1966-68). In the intervening decade, I’d also learned two other languages – Hindi, which I spoke every day as a Peace Corps volunteer in India, 1968-70, and Portuguese, which I used in Brazil in my first USIA assignment, 1971-75. As a result, my fluency in Russian had diminished under the weight of those other two languages.

I was therefore given intensive, daylong, one-on-one conversation sessions with a native Russian speaker in downtown Washington. After a month, I was tested3 and found to be already too fluent to be allowed to continue that effort. According to government rules, no more money could be spent to further strengthen that level of fluency. In theory, they could have sent me straight to Leningrad to begin my tour of duty, but that was impractical, since the position I was to fill was a new one, and neither an office nor an apartment was ready. To make productive use of the next few months, USIA sent me to Garmisch. Most of the students at the Army Russian Institute there were intelligence officers getting advanced Russian area studies training to prepare them for future posts as military attaches in the USSR and Soviet bloc nations – or for work in the field, facing Soviet forces in East Germany. Several others were Foreign Service officers en route to posts at our embassy in Moscow. At the Institute, all the courses – in everything from history, government and the Soviet economy to Russian language and literature – were taught in Russian by native speakers. So it was a great refresher for me.

3. Trick question on the oral test in Russian. “Kak Vasha familiya?” It sounds as if it literally means “How is your family?” However, in Russian, familiya means “family name” and kak (literally “how”) means “what” when used in this sense. So the question actually means, “What’s your family name?” If you respond, “Fine, thank you,” you’ve been tripped up. I recall that after a moment’s hesitation, I avoided the trap and responded “Daniel.”

Everything (Well, Almost) You Ever Wanted to Know About Sweet Kosher Wine … But Were Afraid to Ask
1 reply

The Power of Supercortemaggiore
Scroll to top