Train following the Rhine, like the one on which I came down with chicken pox

You’re getting ready for next week’s business trip to Europe and your kid comes down with the chicken pox. You don’t remember ever having had chicken pox when you were a kid. What do you do?

Well, that’s what happened to me a few decades ago when I was living in Reston, Virginia, near Washington, D.C., and beginning a new assignment as the U.S. Information Agency’s desk officer for five smallish West European countries – Austria, Switzerland and the Benelux countries (Belgium, the Netherlands and Luxembourg). I was about to go visit “my” embassies and get briefings from the USIA team – the public affairs officer and his or her colleagues (press and cultural attachés) – in each of them.

So here’s what I did. I got hold of a doctor right away and asked if I should postpone my trip. Actually, taking no chances, I called three docs: my own physician, our kids’ pediatrician and my first wife’s stepfather. They all might as well have answered in unison. “Nothing to worry about. There’s no way you could have escaped chicken pox when you were a kid. It must have been a mild case that didn’t seem to be much more than a cold. But don’t worry. You picked up the immunity you need. Take off and bon voyage!”

So that’s what I did. A week after my son Adam got sick, I flew to Vienna, met the USIA people at the embassy, did my work and even had time for a lovely evening with Russian friends from Leningrad (relatives of the couple mentioned in this link) who had managed to emigrate from the USSR and settled in Vienna. After my work in Austria was complete, I hopped on a train to Bern, the Swiss capital, and took care of business at the U.S. embassy there.

My Rhine Journey (Not Like Siegfried’s!)
My next stop was Luxembourg, a daylong train ride from Bern, mostly along the Rhine River. Normally, the train follows the French side of the river, but when I got to the station I learned that the French railways were on strike, so the train would be traveling through Germany, along the Rhine’s east bank. Since this was an unscheduled route, it meant there would be no stops until we arrived in Luxembourg. No chance for new passengers to join me in the empty compartment I’d found. A wonderful opportunity for me to relax! And that was, so to speak, just what the doctor ordered because I realized I wasn’t feeling too well. I attributed my malaise to too many late evenings wining and dining with colleagues. So I stretched out and slept most of the way to Luxembourg. When I got off the train that evening, I was a little surprised to realize that my restful journey had not perked me up. I still felt under the weather.

After checking in to my hotel, I went up to my room and stepped into the bathroom. There, in the mirror, was a face that looked familiar in every respect but one. It was covered with dots. That feeling of malaise was … Adam’s chicken pox. (Since I spotted it only upon arrival at the hotel, perhaps I should call it the check-in pox.)

Luxembourg, although the smallest of “my” countries, was in some ways my most important stop. It was the only embassy whose USIA presence was not staffed by an American Foreign Service officer. That responsibility was delegated to our public affairs officer in Brussels, who would visit from time to time and, between visits, stay in touch by phone and diplomatic cable. USIA’s on-the-ground presence had recently been assigned to a local Luxembourg employee of the embassy, a bright, energetic and charming young woman, Miriam, who was also working part-time as an assistant to the ambassador. The main purpose of my one-day visit was to brief Miriam on a variety of USIA procedures that would help her get a handle on her new responsibilities.

Recognizing the importance of my meeting with Miriam, but unsure whether, as a carrier of the pox, I should go ahead with it, I called the embassy bright and early the next morning and spoke with the charge d’affaires, the top American at the embassy that day, since the ambassador was traveling. He urged me to come to the embassy as scheduled, work with Miriam “but stay on the other side of the table.” That’s just what I did. Miriam had lots of questions, and I had a lot of information. We talked all morning, had lunch together at a nearby restaurant, then returned to the embassy and worked all afternoon. I stayed a few feet away from her the entire time, but we were breathing the same air. Like me, she too did not recall having had the chicken pox as a kid.

The next day I headed for Brussels, where the public affairs officer, Bud Korengold,* expressed his regrets but asked me to kindly stay away. I no longer recall the reception I got a day or two later from our embassy in The Hague, but it was probably the same. All week, I found myself leaning against doorjambs and other vertical objects, scratching my back through my suit jacket in much the way bears stand on their hind legs and scratch themselves against trees. Very amusing … in retrospect.

Then it was time to fly back to Washington. By the time I got home, it had been a week since I’d come down with the pox, and I was already on the mend. Adam, who’d started the whole thing, was also feeling better. However my wife greeted me with the news that our daughter, Naomi, had gotten sick a week after I’d left – at about the same time I spotted the spots in the hotel mirror. Chicken pox, it seems, has a two-week incubation period.

About a week after I returned to work – and two weeks after I’d gotten sick – my boss, the head of USIA’s European Area Office, dropped by my office and told me she’d just received an angry phone call from our ambassador in Luxembourg. It turns out that Miriam too had fallen ill and had been unable to come to work and do something for which the ambassador needed her assistance. The ambassador, said my boss with a smile, had wanted the scalp of that damn trans-Atlantic pox vector. Like the sailors, rats and fleas who brought the Black Death to Italy in 1347, I’d carried a plague to Europe.

* Robert J. “Bud” Korengold is the best writer it’s ever been my pleasure to know personally. I first “met” him when I was a college student majoring in Russian studies. He was then the Moscow bureau chief for Newsweek, and I read his reports and analyses with great interest. A distinguished journalist and gifted writer, Bud has far greater claims to fame than the trivial fact that I used to read his stuff. One of them dates back to 1959, when, as Moscow bureau chief for United Press International (UPI), he was the first Western journalist to interview Lee Harvey Oswald after Oswald visited the American embassy in Moscow to renounce his citizenship and defect to the Soviet Union. This was four years before Oswald, who later returned to the U.S., assassinated President Kennedy.

Two decades later, when I was appointed to the Benelux desk at USIA, I found out that “my” public affairs officer (PAO) in Brussels was Bud Korengold. I wondered if this was the same guy who used to report from Moscow for Newsweek. It was. He’d switched careers. Bud turned out to be a wonderful, friendly colleague who soon rose to the top of the USIA’s foreign service officer corps. He also paid me one of the finest compliments I’ve ever received. Like all PAOs, he’d send periodic reports to USIA headquarters. Bud’s reports, unlike many others, were always a pleasure to read. As desk officer, I saw all correspondence between USIA and “my” posts. Once, in one of Bud’s reports, I realized he’d neglected to mention something I knew would be of interest in Washington. After I alerted him, he sent me a quick message to the effect that “every good writer needs a good editor” – a compliment I’ve treasured ever since. Thanks, Bud. 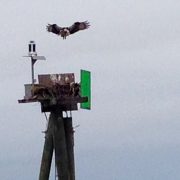 A Chilling Tale From a Cold Moscow Night

How Do I Know a Twin-Engine Jet Can Fly on Just One Engine?
Scroll to top