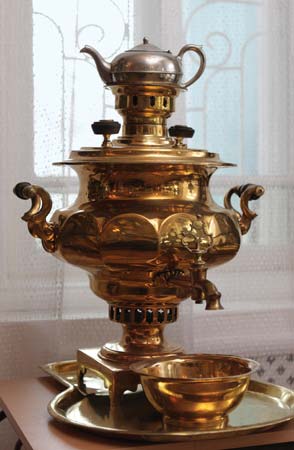 Chai: a wonderful thirst-quencher I was fond of long before it became trendy. Actually, I often drank tea as a boy, as it was my parents’ regular post-prandial refreshment. They enjoyed it with lemon rather than milk, which (unlike coffee, to which they would always add milk) made it acceptable after a meal with meat in our kosher home.

Then I went off to college, studied Russian and soon discovered that chai (чай) was the word for tea. Following college and graduate school, I joined the Peace Corps and went off to India where I discovered that chai (चाय) was the word for tea in another language, Hindi. All of which happened long before – back here in the States – coffee shops, restaurants and trendy emporiums catering to foodies were merchandising as “chai” a wide range of (to me, mostly) unpalatable potions.

In Russia, tea is generally drunk with lemon and sugar (or jam), and, if you’re lucky, served from a samovar (самовар – from the roots sam [self] and var [boil] – photo above) which keeps the water piping hot and on top of which rests a small teapot (чайник – chaynik) containing an exceptionally concentrated brew that is mixed in the teacup with a larger quantity of scalding water from the samovar. I found it particularly refreshing when served on a moving train in thin-walled tea glasses held in highly decorated metal tea-glass holders (photo below; also see https://en.wikipedia.org/wiki/podstakannik). 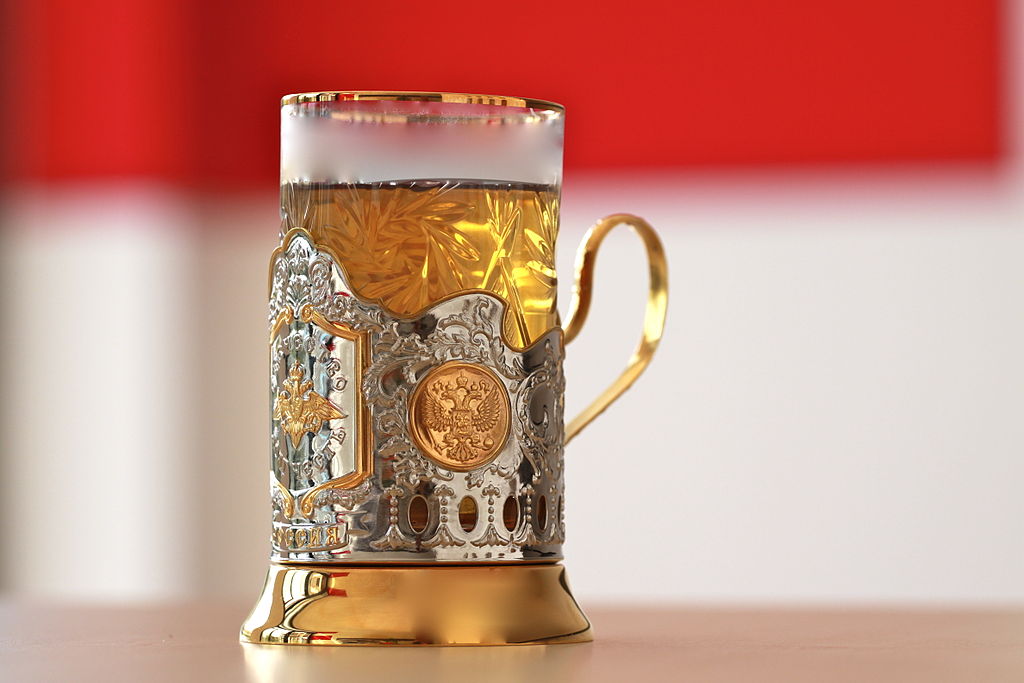 But drinking tea in village India was far and away the most fun. Like tea in Great Britain, the former colonial power, which brought the tea-drinking habit to the subcontinent, it was always consumed with milk rather than lemon. I’d have it with my breakfast of shockingly sweet Indian confections every day at a tea stall near the village bus estand (bus stop) and post office.

What made it fun was not just the enjoyment of something delicious to eat and drink, but watching the chai being made. It was quite a show. Into an open metal pot the dukandar (stall keeper) would pour milk and water, then add a healthy dose of sugar, several pods of cardamom and tea dust.

“Tea dust?” you ask. “What’s that?” It’s not recognizable tea leaves, but a dark, powdery substance that I always guessed was basically the sweepings from the tea warehouse floor – the ground-up bits that remained after processing and were marketed to the poor in India’s villages after the leaves (i.e., the good stuff) were packed for export.

The dukandar would bring this mixture to a boil, and as the milk rose toward the top of the pot, he would take it off the flame. He would repeat the process three or four times, then pour the hot mixture into a metal teapot.

The most entertaining part, for me, was the execution of the pour into the teapot. Why? Because it was necessary to filter the tea dust out of the beverage. This was done by draping a piece of cloth over the mouth of the teapot where it could catch the solids. This was no ordinary piece of cloth – no swatch of pristine, white cheesecloth. Not quite. Gray and dingy from having been used for this purpose scores, perhaps hundreds, of times, it resembled nothing quite so much as an old gym sock plucked from a teenager’s pile of unwashed laundry.

The pièce de résistance (or perhaps the coup de grâce?) in the creation of this liquid masterpiece was when the dukandar would lift the cloth, wrap it around the steaming tea dust, and carefully wring the last drops of goodness into the teapot. From which it would then be poured into the cups of waiting customers. And from which they, in turn, would dribble it into their saucers, the more quickly to cool it to a drinkable (slurpable!) temperature. 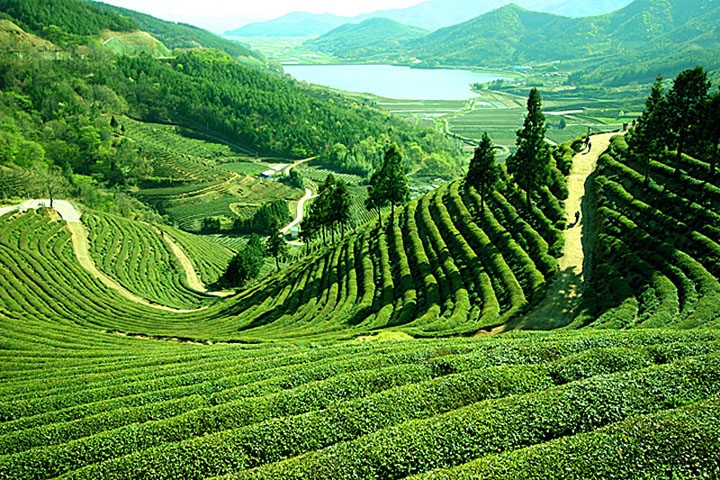 I really enjoyed my village chai, but one summer, when several Peace Corps friends and I escaped the oven that most of India becomes during garmi (the hot season that precedes the monsoon) by traveling to Darjeeling (photo above), I discovered village chai with a twist. There, in the cool foothills of the Himalayas – the source of one of the world’s finest teas – they brewed chai with local dust. Darjeeling tea dust. In my experience, the world’s ultimate tea dust. If you travel there, be sure to try some. The experience will be a memorable one. Take it from a tea dust connoisseur!

Complicating the Search for a Unified Field Theory

On Playing the Guitar, Segovia Didn’t Always Have the Last Word
Scroll to top