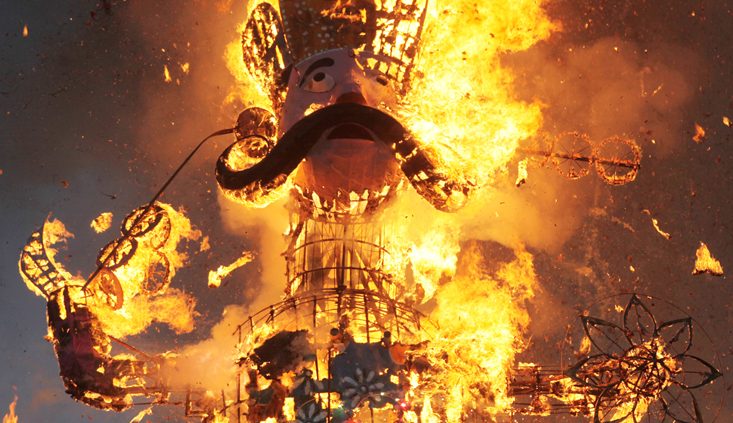 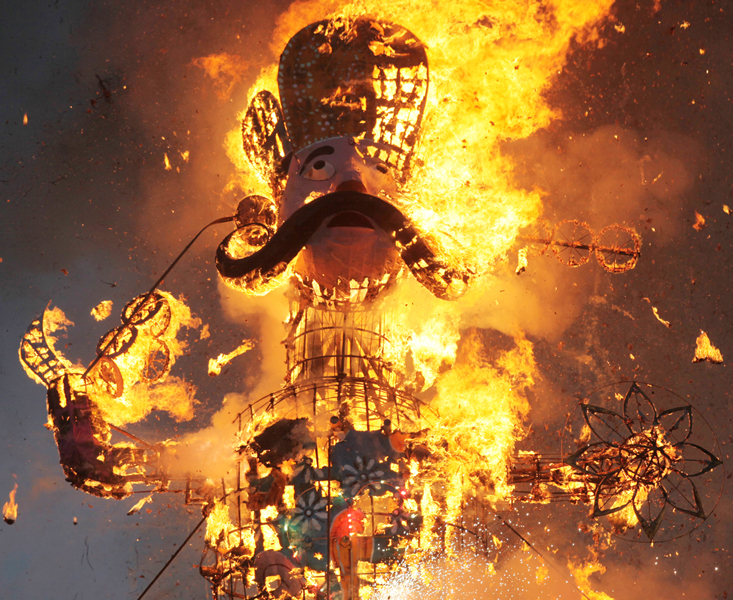 The defeat of evil: burning a Dusshera effigy of Ravana

In the late summer of 1970, as I was nearing the end of my Peace Corps service in India, the local Peace Corps office asked if I would be willing to stay on for another three months to help train a new group of volunteers that was scheduled to arrive shortly after my group would be leaving for home. It sounded like an interesting challenge, and I agreed to do it.

Unlike my group, which spent the first two months of training in California and then underwent a final month of training in India, the group of volunteers I would be working with were to be trained entirely “in country,” that is, in India.

There was only one small hitch in the plan. A major Hindu holiday, Dusshera, would take place some weeks after training was to begin. A major, nationwide celebration that commemorates the victory of good over evil (the victory of the Hindu god Ram over the demon king Ravana), it is as important a holiday in India as Christmas is in the U.S. and most Western countries. There was no way training could continue over the holiday, as virtually all the Indian members of the training staff would expect to go home for a few days and join their families in the celebrations, which normally include bonfires and fireworks.

The solution to the problem was simple. Give the Indian staff members time off and have the trainees and American staffers head to what Indians call a “hill station”* for a few days of rest and relaxation. And that’s just what we did.

We had a great time, but only two of the things we did on the break stand out in my memory. One was that, in the spirit of the holiday, we set off a lot of fireworks. The most spectacular one was a rocket that went astray, heading more sideways than up and getting caught under the eaves of the house where a lot of us were staying. There it remained stuck, spewing fire from its tail as it pointed upward with nowhere to go and then exploding in a shower of color and smoke that should have taken place a couple of hundred feet in the air. We were lucky the thing didn’t set the wooden building on fire.

The other thing I recall was an outing to a nearby waterfall. Not exactly Niagara, but at least 50 feet high and with enough volume to create quite a splash in the waist-deep pool at the bottom. We swam, picnicked and hung out on the pebble beach that surrounded the splash pool.

As I sat on the beach, something caught my eye. One of the trainees, a guy in his early 20s who had always struck me as a little extra-macho, was starting to scale the cliff – in bare feet or flip-flops, as I recall – leading up toward the lip of the waterfall. He was on a steep, narrow path, probably not much wider than his feet, heading diagonally up the cliff face. When I spotted him, he must have already been about 20 feet above the pool. It scared the bejeezus out of me. He could easily have slipped, fallen and badly hurt himself – or worse.

I yelled and told him to get right back down, which, fortunately, he did. Afterwards, as we talked and I explained my concerns, I said that I find some height situations frightening and expressed amazement at the courage he’d displayed in heading up a cliff on such a hazardous path. He shrugged it off and said he didn’t feel courageous at all … it didn’t look scary to him, and he’d felt sure he’d have no trouble.

Then he told me he thought I was the brave one. What the devil are you talking about, I asked. He said he thought it took tremendous courage to live alone – that is, as the only American – in an Indian village, spending days at a time working and communicating only in Hindi. The prospect of doing that, he said, was scary to him.

I told him that for one reason or another it had never really fazed me … that except for an odd moment or two** near the beginning of my stay in “my” village, I’d felt perfectly at ease and not in the least courageous.

All of which, we agreed, goes to show – as they always say – that courage is doing something that frightens you, despite the fear. It’s not doing something that others might fear but which is comfortable for you. In other words, like so much else, it’s all in your head.

* Hill stations are resort areas – bare-bones simple by the standards of today’s luxury resorts – in elevated, relatively cool locations where, in the days before India gained independence (1947), British colonial officials would go to vacation, escaping the heat common to most of lowland India for much of the year.