I wrote this article in December 2015 for the 2016 edition of the annual Santa Rosa Chamber of Commerce directory (aka the Santa Rosa Community Resource and Business Guide), which was published this week. 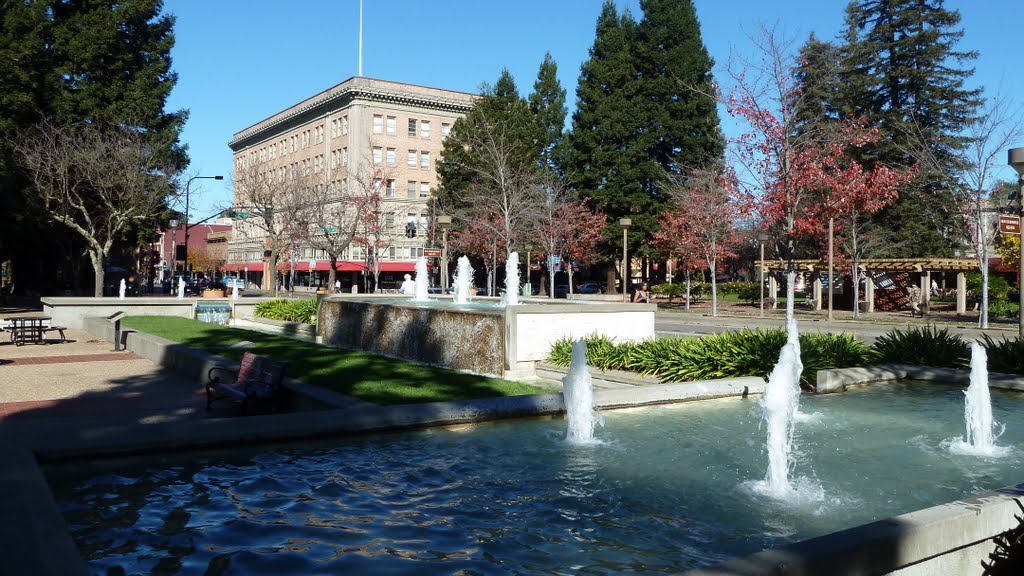 These are just a handful of people’s reactions – immortalized on TripAdvisor – to the plazas in Healdsburg and Sonoma town. Soon, with the pending revitalization of Old Courthouse Square, Santa Rosa can expect similar oohs and aahs.

Yes, talk has given way to action. After years of discussion about rejoining the two halves of the Square, bisected for half a century by a four-lane divided roadway, action has not only begun, it’s being fast-tracked. If all goes according to plan, the roadway will be removed, construction and facelift completed, and the Square reborn by the end of 2016.

Roadway will give way to green space, cars to people

An 1854 gift to the city from two of Santa Rosa’s leading citizens, Julio Carrillo and Barney Hoen, the Square has a long and varied history. From 1884 to 1966 it was the site of the Sonoma County Courthouse. The 1966 demolition of the courthouse made it possible to extend Santa Rosa Avenue and connect it with Mendocino Avenue. The California Department of Transportation, as Caltrans was then known, created this Square-splitting roadway to minimize through-traffic delays at a time when those streets did double duty as Route 101.

Some three decades after the 1968 move of 101 to the freeway, the reunification of the Square took its place on the public agenda. The discussion built up a head of steam with the realization that a reunified, revitalized Square would be a magnet for new shops and eateries that would attract people and stimulate economic growth in a downtown where nearly half the commercial space has lately been vacant.

For a model, the Chamber of Commerce and others in what became the Coalition to Restore Courthouse Square had only to look to Healdsburg and Sonoma, whose popular plazas are understood to have stimulated those towns’ economies. The Press Democrat reported in July 2015 that according to urban planner Lois Fisher, “in places like Healdsburg, buildings that face the downtown square command 25 percent rent premiums over spaces just a block off the plaza.” 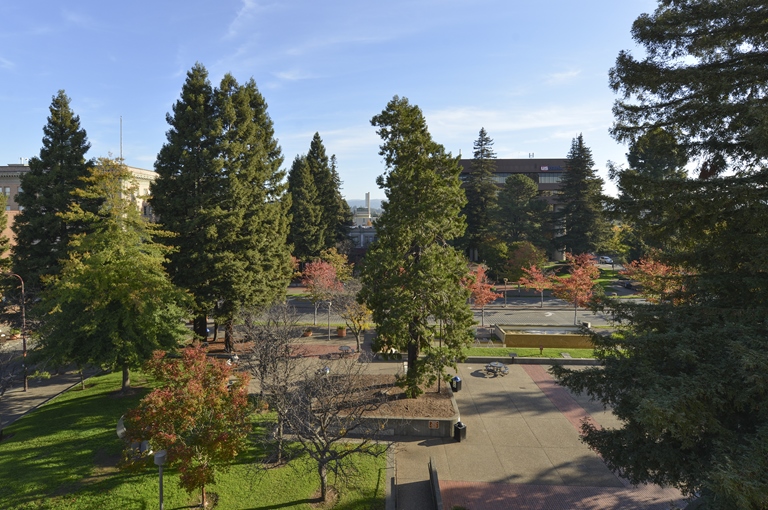 It is this new plan that is now being fast-tracked. In November 2015, the design contract was awarded to Carlile-Macy, and the City of Santa Rosa quickly began seeking residents’ input through an online survey and public meetings. As this article was being written in the closing weeks of 2015, it was anticipated that a conceptual plan, incorporating the public’s input, would be presented to the City Council in late January 2016, followed a month later by construction plans. Construction bids were to be solicited in March and a contract awarded in April. Shortly after the Amgen Tour of California’s Santa Rosa stage and the Luther Burbank Rose Parade and Festival – both on May 21 – construction is slated to begin. If this aggressive timeline holds, the restored Square will reopen to the public in mid-November 2016.

North-south traffic that for the past 50 years rolled right through the Square is to be rerouted along B Street. At Third Street, northbound vehicles will turn left off Santa Rosa Avenue, right onto B Street and right again onto either Seventh or Tenth Street to connect with Mendocino Avenue. Southbound vehicles on Mendocino will bear slightly to the right at the College Avenue “Y” intersection, which will put them onto Healdsburg Avenue, leading directly onto B Street. From B Street they will turn left at First Street to connect with Santa Rosa Avenue.

Newly constructed Hinton and Exchange avenues will skirt the Square on its east and west sides, respectively, and offer several dozen new diagonal parking spaces at both left and right curbs. Both streets will be one-way, with Hinton accommodating southbound flow and Exchange handling northbound vehicles. This clockwise traffic circulation and the additional parking are designed to facilitate access to the Square. Existing traffic signals at the Third Street-Santa Rosa Avenue and Fourth Street-Mendocino Avenue intersections will keep traffic moving smoothly. 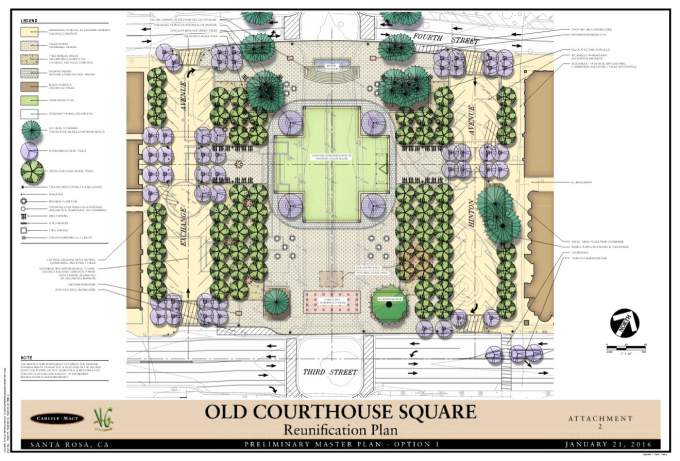 Most importantly, both Exchange and Hinton avenues will be graced by sidewalks wide enough to accommodate chairs and tables outside the eateries that the reborn Square can be expected to attract. And while the specific features of the revitalized Square had yet to be determined at the time this article was written, its potential to draw visitors is expected to be a magnet for a variety of new businesses.

The anticipation surrounding the rebirth of Courthouse Square is palpable and will only grow as work nears completion. Once the Square reopens, the exclamations of “charming,” “idyllic” and the rest will no doubt begin, and the heart of Santa Rosa – downtown’s delightful gathering place, brought together into something far more alluring than the sum of its two previous halves – will beat with renewed vigor.

Seven Centuries of ‘Sex, Lies But No Videotape’