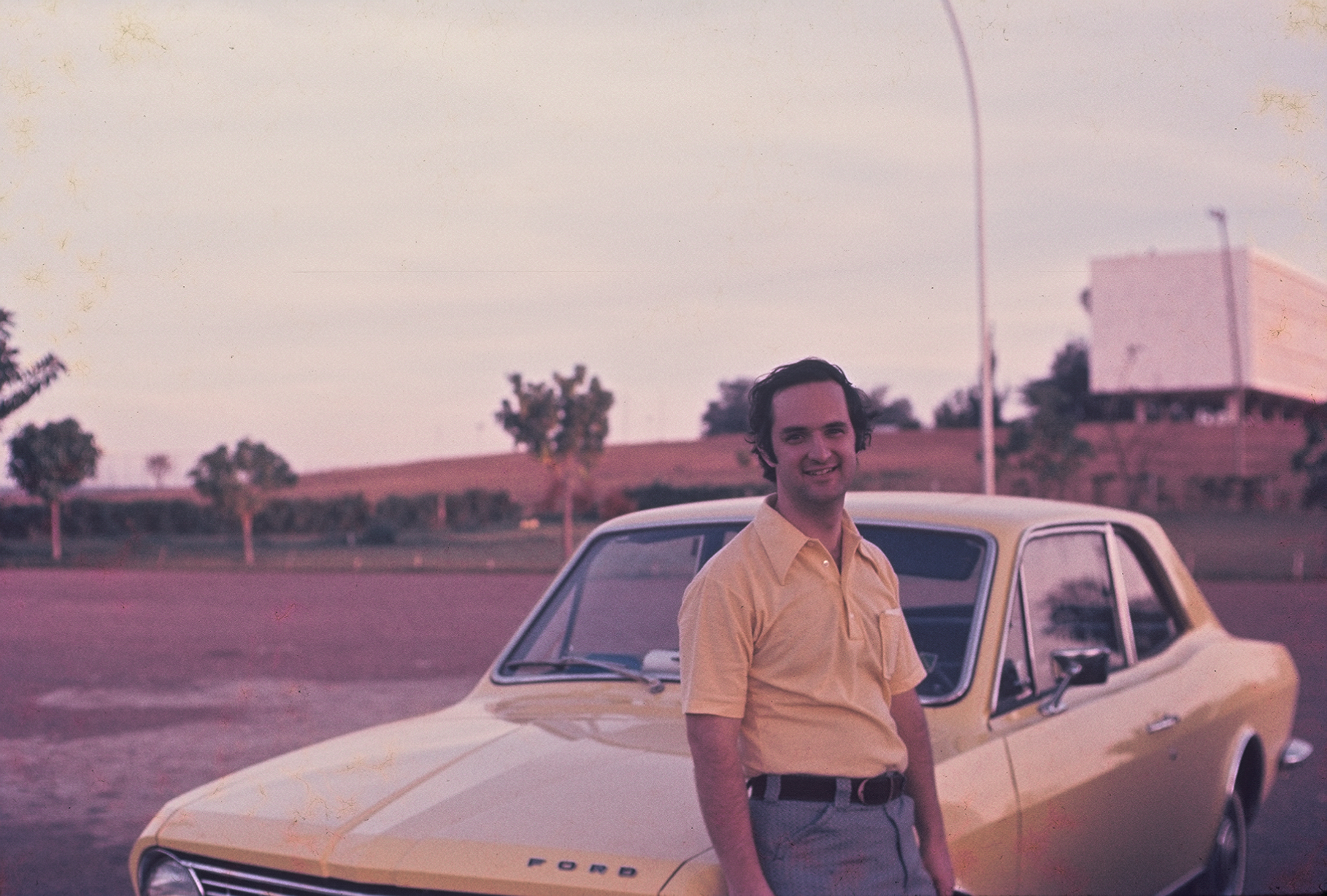 Here I am with my Corcel, a Brazilian-made Ford, relaxing in Brasilia in 1972 or thereabouts.

I got my bachelor’s degree in Connecticut and my master’s in Massachusetts, but I had to cross the equator and fly all the way to Brazil for my Ph.D.

I hasten to add that this doctorate was not in a traditional academic discipline. But in the discipline of driving an automobile, Brazil offers a world-class curriculum.

The most hair-raising experiences I had on Brazil’s roads were in hilly Minas Gerais, in whose capital, Belo Horizonte, I lived and worked, while in the U.S. Foreign Service, from 1973 to 1975. In Minas, drivers took the most heart-stopping risks, routinely passing each other on the hills, curves — and hilly curves! — of the state’s mostly two-lane roads.

How hilly? Imagine San Francisco. I can’t tell you how often I’d reflect on how lucky the Mineiros (residents of Minas) were not to live in a cold climate. Snow would have made many of those hills insurmountable. Literally. 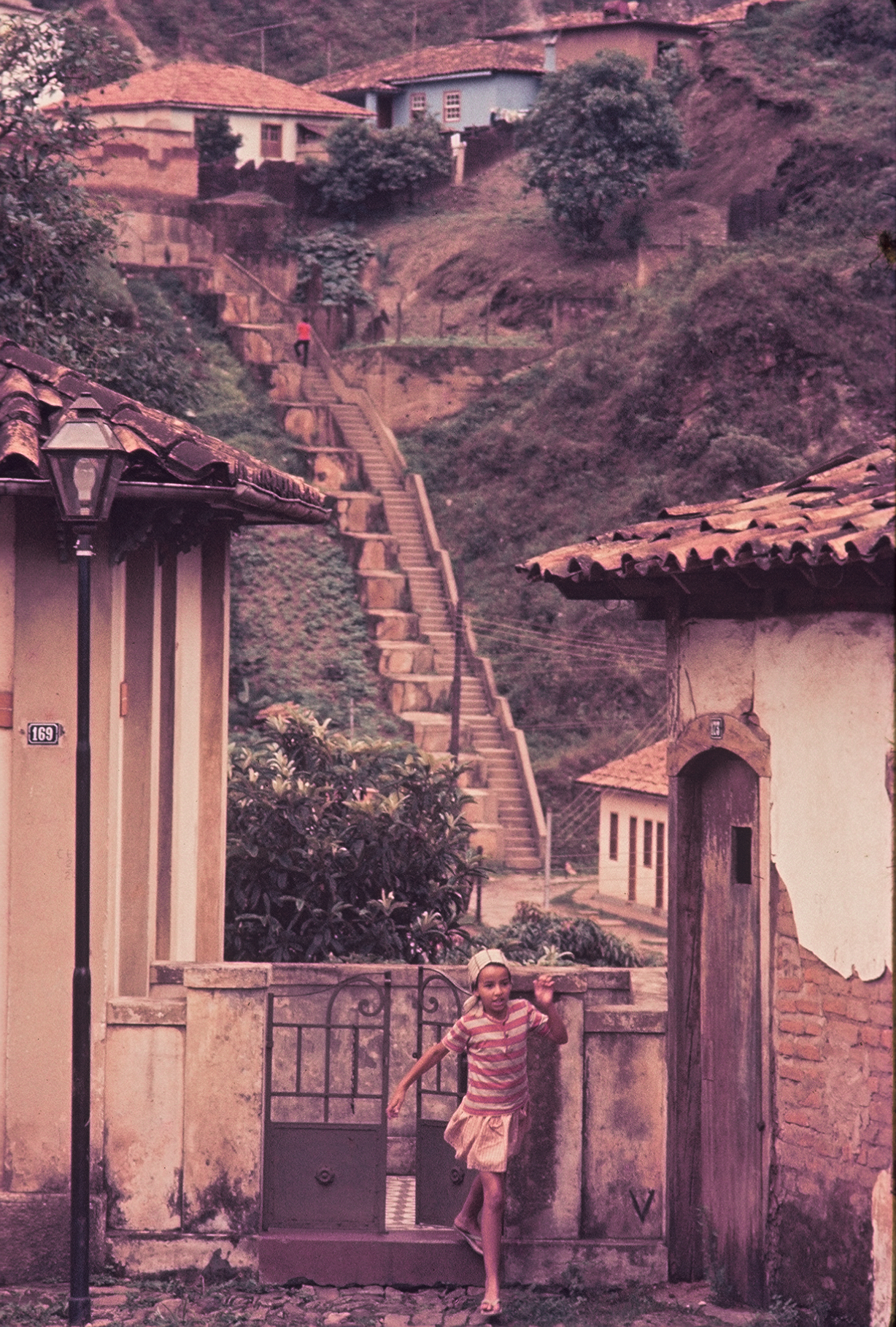 The worst offenders on those hilly curves were the drivers of the ubiquitous trucks carrying oversized loads of charcoal.

If you’ve never seen a large, open-topped truck overflowing with charcoal, it’s probably because you haven’t been in a place rich in iron ore but totally lacking the coal that’s needed to produce coke, an essential ingredient in smelting iron. In coal-poor Brazil, they substitute charcoal for coke. (And if you think the prodigious production of charcoal might affect local forests, you’d surely be right.)

Is Minas Gerais (in English: “General Mines”) rich in minerals? And how! While it abounds in gemstones like aquamarines, emeralds, tourmaline and topaz, iron is its most heavily mined treasure. The resulting appetite for charcoal is insatiable.

I’d often be driving up a long slope behind two charcoal-laden trucks, one right behind the other, when the driver of the second truck felt that if he stepped on the gas a little harder he might eke out one or two extra miles per hour and creep past the slowpoke in front of him. Hills and curves didn’t deter these drivers, so I’d find myself behind two behemoths lumbering up a hill on a blind curve, taking up both lanes as they vied for the lead.

I never actually witnessed a crash resulting from such reckless (surely not wreckless) driving, but I learned one lesson very quickly. Hang well back from contests like these. It was the only way to keep from getting crushed if the trucks lost their “parallel chicken race” gamble.

The hills of Minas were not the only scary places in Brazil. In Brasilia, the capital, where I was posted to the U.S. embassy 1971–1972, I remember the frequent sounds of screeching brakes and crumpling metal when I’d visit friends in apartments overlooking the Eixo (English translation: Axis), the broad limited-access road to the airport.

These are just my most memorable recollections of driving in Brazil, and the reason why I consider my experiences there worthy of credit as a Ph.D. in driving.

My Theory
Thanks to years of living and traveling abroad, particularly in Third World countries, I’ve developed a theory about why drivers in many of them behave so differently behind the wheel, in the aggregate, than their counterparts in the United States.

Here’s my theory. In the U.S., probably ever since the 1940s, most youngsters grow up in families that have a car. Throughout their childhood, kids have the everyday experience of observing mom and dad driving. Of course, not everyone drives with care and courtesy, but, in my observation, most American drivers do relatively well in this regard. So when youngsters reach the age where they can get a driver’s license, most of them — except a relatively few show-off males — drive more or less conservatively, much like their parents.

In developing countries, however, many (if not most) drivers are the first in their families to have ever owned and driven an automobile. For many of these motorists, particularly the males, getting behind the wheel offers not merely the pleasure of newfound mobility and freedom that most new drivers enjoy, it offers thrills and power far greater than what new American drivers, even testosterone-drenched teens, typically experience.

And in countries where machismo is part of the culture, as in much of Latin America, the power of driving can be especially intoxicating.

A related factor is also at play in developing countries. With driving being outside the experience of most of the population, a great many pedestrians (i.e., those who have never driven a car) seem unaware of their vulnerability. From my observations, many of them appear to believe that if they can see an approaching car, its driver can just as easily see — and avoid — them. This can lead to fatal miscalculations about how to cross a roadway. Such miscalculations are especially dangerous at dusk and later in the evening, when pedestrians can easily spot a car by its headlights but have little or no clue as to how nearly invisible they appear to drivers who are not already perilously close. Needless to say, pedestrians wearing dark clothes are even more at risk.

But it’s not just pedestrians who can miscalculate. New drivers, even those not under the influence of testosterone that automobile ownership tends to heighten, are subject to miscalculating the limitations of observation and reaction time by both pedestrians and other drivers. That is why the automobile death toll is far higher in developing countries than in the U.S.

The comparable statistics for Brazil: 23.4 traffic fatalities per 100,000 inhabitants a year and 57.5 fatalities annually per 100,000 vehicles. Those figures are, respectively, over twice as bad (2.1 times) and nearly five times as bad (4.5 times) in Brazil as in the U.S.

Interestingly, according to the statistics I found, Brazil is actually far from the most dangerous, challenging place in which to earn a Ph.D. in driving. That distinction goes to Africa, where the death toll is astronomically higher. Libya comes in first in annual fatalities per 100,000 inhabitants — 73.4. The West African nation of Guinea beats all comers in fatalities per 100,000 vehicles per year — a mind-bending 9,462.5!

Take a moment to let that sink in. In Guinea, over 9% of all cars are involved in fatal accidents every year!

Where is the safest place to drive? Western Europe. Norway has the world’s fewest annual fatalities per 100,000 inhabitants — 2.2. And the tiny Republic of San Marino (a “microstate” completely surrounded by Italy) has fewer fatalities a year per 100,000 vehicles — 1.8 — than any other nation.

So while you’ll hardly need a Ph.D. in driving for most of Western Europe, if you’re determined to add a driving doctorate to your curriculum vitae, head for the developing world. I’m happy to have qualified for mine in Brazil, but if you’re looking for the ultimate challenge, Africa is the destination for you!

How Do I Know a Twin-Engine Jet Can Fly on Just One Engine?
0 replies

‘No-Crash’ Courses in Driving in Italy, England and Japan
Scroll to top