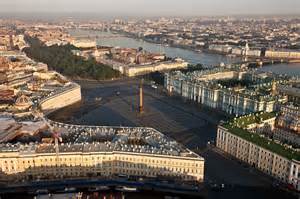 Last week, on the eve of July Fourth, I wrote about my late father-in-law, Bob Kelley, and his Bicentennial Essay in The American Historical Review. With the fireworks still (figuratively) echoing in my ears, I’m writing this week about another personal connection with the Fourth of July.

On that date in 1978, I witnessed what I believe was very likely the biggest spontaneous demonstration to take place on Palace Square in Leningrad (now St. Petersburg, Russia’s second-largest city) since the world-changing October Revolution1 in 1917, when the Bolsheviks (Communists) seized power in Russia.

At the time I was less than a week from the end of a two-year Foreign Service posting to the U.S. consulate-general in Leningrad. So, while it was a holiday, and the entire staff had enjoyed a picnic that afternoon, I was back at my desk early that evening, trying to wrap up a major report before finishing my tour of duty and returning to the U.S.

The phone rang and, as the only staff member then in the building, I picked it up. It was the consul-general of France, calling from his office just down the street from the Winter Palace (the home of the czars and seat of government in pre-revolutionary Russia), trying to reach his American counterpart. Finding at least one American at work, he told me I should get down to Palace Square right away to see what was happening there.

A Huge Demonstration
I promptly drove over there and saw something unheard of in the USSR. It was a huge, utterly spontaneous demonstration by several thousand people in a gigantic human ring, four or five people deep, around the perimeter of the enormous square.

I no longer recall exactly what I personally heard people in the crowd saying because my recollection, nearly four decades later, is colored by what I do recall very well – what several American graduate students2 who had also been there told me a day or two later. They reported that people in the crowd were shouting “Svoboda!” (Freedom!) and demanding to hear a rock concert they felt had been promised. They had also seen police beating and chasing demonstrators away from the square, down Nevsky Prospekt (Leningrad’s main street) and that some of the fleeing demonstrators had tried to escape by jumping into the Moyka, the innermost of the waterways ringing the center of the city. I also saw police cars blocking the end of each street leading into the square, with officers ordering everybody, through rooftop loudspeakers, to disperse and go home. I recall this clearly because I’d pulled up and stopped just a few feet from one of the police cars when I arrived at the square.

A Fairy Tale
There’s a back story to this little-heralded event. The previous summer, an American concert promoter, whose name I have long forgotten, called on me at the consulate and told me something I considered tantamount to a fairy tale. He said he was in town making arrangements with the local office of Goskontsert (the Soviet office in charge of all musical performances, of every kind, throughout the country) for a concert featuring the Beach Boys and a locally well-known Soviet pop group (name also forgotten) that would take place the next July 4 (1978) in Pushkin,3 about 20 miles south of Leningrad.

Why did I consider this a fairy tale? Because the Soviet authorities did not approve of rock ’n’ roll. And a concert by a blockbuster American rock group – let alone on July Fourth! – would arouse the kind of passions that the repressive Soviet regime, by its very nature, feared. I could not imagine that such a thing would ever happen and told the promoter he should not count on its taking place. Someone higher up, I was sure, would kill it. He, however, maintained he was being given a green light. In any case, I reported all this to the State Department, the U.S. Information Agency and our embassy in Moscow.

Imagine my surprise then, when several months later, I spotted a page-one article in Vecherny Leningrad (Вечерний Ленинград), the city’s evening newspaper, announcing the concert, but stating – to my utter astonishment – that it would take place in Palace Square! I still couldn’t believe it would happen, let alone in the heart of the city, but I also had to consider that, according to everything I knew about Soviet newspapers, the article couldn’t possibly have appeared without the express approval of both the censor and higher-ups. It made no sense to me. But there it was, in black and white.4 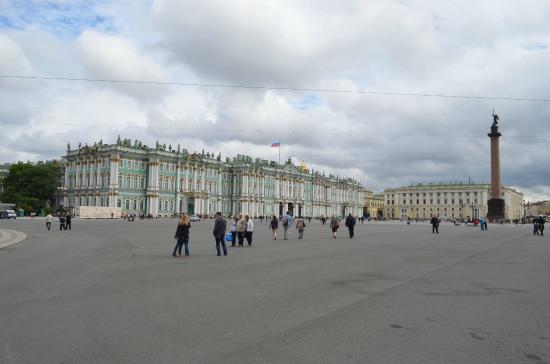 Palace Square: Birthplace of the Revolution
To fully appreciate the significance of Palace Square, and why I was so flabbergasted at the thought of a July Fourth Beach Boys concert there, consider the following. The location is the heart of the city, its Times Square. It was the place where, on the USSR’s two most important holidays (May Day and November 7, the anniversary of the October Revolution), big parades would always be held, the local counterparts of the huge displays of military might on Moscow’s Red Square. Finally, the Winter Palace, for which the square is named, was the seat of the Provisional Government that tried to rule Russia between the time Czar Nicholas II abdicated in February 1917 and the October Revolution, and it was here that, with the Bolsheviks’ arrest of the Provisional Government ministers, Communist rule began in Russia. 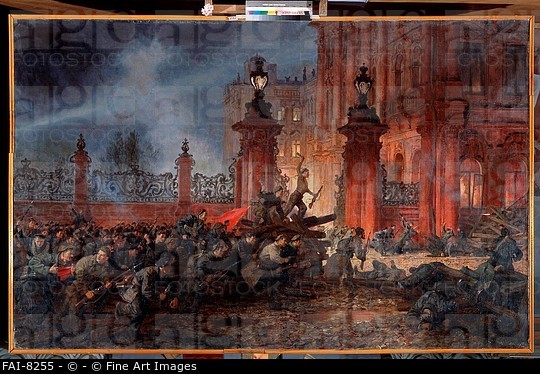 This is how Soviet propaganda depicted the fall of the Winter Palace.

Interestingly, despite the portrayal in the film The Storming of the Winter Palace (and again, some years later, in October: Ten Days That Shook the World) of the palace being overwhelmed by a horde of armed revolutionaries, the Provisional Government collapsed more with a whimper than a bang. Most of the palace defenders surrendered after only a few shots were fired, and the ministers, gathered ineffectually around a conference table, submitted meekly to arrest. Most were eventually executed.

In any case, to the best of my knowledge, following the appearance of the Vecherny Leningrad article, no one at the consulate heard a peep about the concert despite our periodic inquiries to the local authorities. Certain it was dead, I forgot all about it. But many Leningraders clearly did not. Which is why thousands turned out that evening in what – in that tightly controlled society – was an unprecedented spontaneous demonstration.

Ever since I first recounted this story, I’ve told listeners that that July Fourth evening saw the biggest spontaneous event to take place on Palace Square since November 7, 1917. Actually, considering how “the storming of the Winter Palace” actually took place, the event I witnessed was likely a good deal bigger.

Independent Verification
For verification of this unusual incident, anyone interested can make a Freedom of Information request to the State Department to see the messages (diplomatic cables) I drafted at various junctures of this mini-saga.

When I did a Google search to find out if anyone else has publicly reported this event, I found a fascinating message board item written by an American exchange student in Leningrad at the time.5 The key passage: “I remember being in the middle of a huge demonstration/protest in palace square on July 4, 1978 where the masses were chanting ‘Freedom for Our Country!’ while the authorities tried to disburse [sic] the crowd with water cannons, unsuccessfully. This was bigger than any of anti-Vietnam war protests I saw growing up in Boulder, Colorado.” (I don’t recall seeing any water cannons; perhaps I should have stuck around longer.)

This is what I recall of an obscure, but telling, incident in Soviet history. I feel confident that it was but one of many social indicators that impelled Mikhail Gorbachev and his reform-minded allies in the Kremlin, less than a decade later, to begin reversing repressive – and mostly bloody – decades of Soviet history and embark on the policy of glasnost that ultimately led to the USSR’s demise.

‘The Point Being Is That …’
Scroll to top