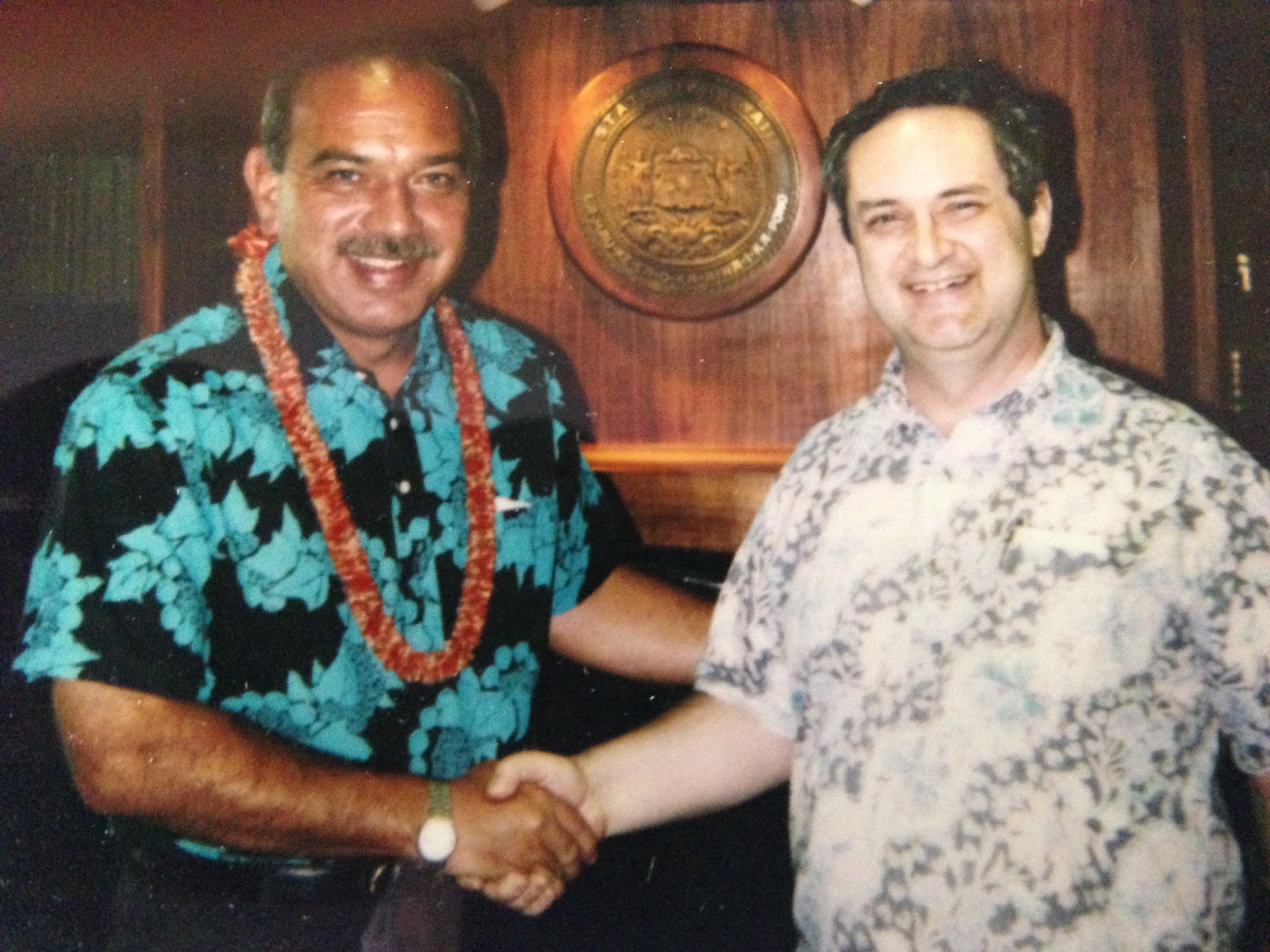 Gov. John Waihee with speechwriter Howard Daniel on the morning of “the Guv’s” last day in office, Dec. 5, 1994

Last week I wrote about why I love the work I do. This week, readers might be interested to learn how it was that, a quarter century ago, I found myself working as speechwriter to Hawaii’s governor, John Waihee.1 This was actually my first full-time job as a writer. In all my previous positions, writing and editing had been just one of my responsibilities.

It was being unemployed that landed me in the governor’s office. See this footnote2 if you’d like to know how I came to be unemployed. It’s not your everyday story.

As part of my efforts to find work, I networked feverishly and sent my resume to everyone I could think of. A friend, Jim Manke, well-connected among leading members of the Democratic Party in Hawaii, suggested I apply for an opening in the governor’s office. This was in January 1994, and the end of Gov. Waihee’s second four-year term was less than 11 months away. Members of his administration were already looking for jobs that wouldn’t “term out” in December when the governor’s successor would take office.

My first response to Jim’s suggestion was, in effect, “You’ve got to be kidding. I’m an independent. I’ve never been a political activist. Surely the governor wants everyone on his staff to be a stalwart Democrat. I can’t possibly qualify.”

Jim said not to worry about political credentials. “Just send in a job application.” I thought this was pie in the sky, but Jim persisted. Finally, thinking I had nothing to lose but a little time, I submitted an application. It was not for the speechwriter job, but for another communications position that was then opening up.

No Political Bona Fides Needed
The next thing I knew, I was invited to come in for an interview. To my surprise, no one asked about my politics. (Perhaps they assumed — and in Hawaii, who could blame them — that practically everyone was a Democrat.)

After some discussion about my professional background, I was shown to a desk with a computer and asked to draft two press releases. A few days later I was hired. Just like that! As the governor’s speechwriter, no less!

My first day on the job required only that I sit next to the departing speechwriter, observe his work and ask questions. The next day, we switched chairs. Now sitting at the computer, I got my first speechwriting assignment. Delivered by one of the secretaries from the governor’s suite, it was a single sheet of paper with only the sparsest of information — the governor was to address a group (I’ve entirely forgotten which group) at a certain time and place a few days away. “Please draft his remarks.”

So I asked the novice’s obvious question — what will the governor want to tell the people he’ll be addressing? The answer, in so many words: “That’s your job. You figure it out.”

I got a few helpful hints from my predecessor in the neighboring chair. (He would disappear altogether in a couple of days, however.) “Begin by acknowledging the bigwigs from the organization that invited the governor to speak. Compliment them on the great work their organization does, tell them how important you think their mission is, and say something about how much the governor and his administration are doing in support of their efforts.”

So If I Were the Governor …
Then I was on my own. It didn’t take long to figure out how to do every speech. After following the formula sketched out above for the introductory section, I’d just think: If I were the governor, what would I want to tell them? And what would they want to hear from me? Then I’d write it out and send it to the governor.

A day or two after the speech in question had been delivered, I’d again see my draft, now marked up with the governor’s additional thoughts and changes, which, I learned, he’d usually make in the back seat of his limousine, or on his commercial flight, en route to the location where he’d be speaking. This helped me shape future speeches.

With only a couple of exceptions I can now recall, the guv (as everyone in the office called him) never asked me to come in and hear his thoughts before I got to work on a speech. One of those exceptions was pretty memorable, however.

It was in connection with the keynote address he was scheduled to give at Hawaii’s Democratic Party convention. When that assignment landed on my desk it was accompanied by the request that before starting to put together a draft, I consult with a group of three or four of the governor’s closest political advisors to hear their suggestions regarding the speech’s content.

I didn’t want to meet them empty-handed, however, so I created a preliminary draft. When I walked into the meeting, I gave copies to each of them and asked for their thoughts. I recall getting only one suggestion, however. It concerned a baseball metaphor I’d dreamed up. “The governor’s not really much of a baseball fan,” one of them told me. “I think you should revise that passage and use a basketball metaphor instead.”

So I made the suggested change and sent my revised draft to the governor for review. When he called me to his office, he too had just one suggestion: “I’d like you to replace that basketball metaphor with a baseball one.”3

So I did. At the convention, the speech — a real stemwinder — went over well, and several months later I had the additional gratification of seeing my work win two speechwriting awards.

Why I Love My Work