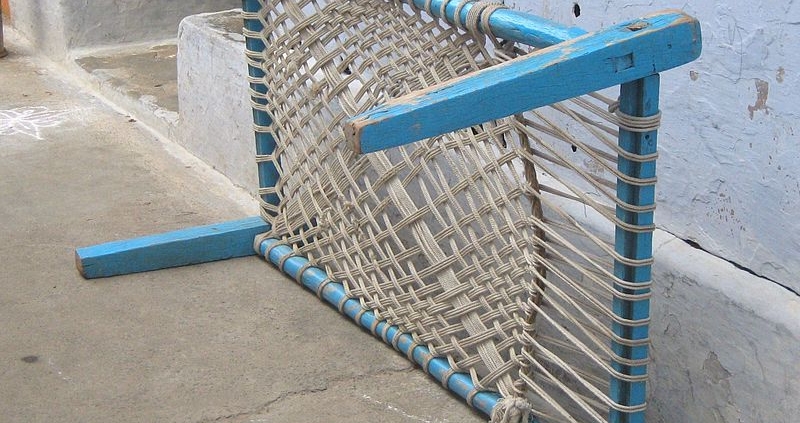 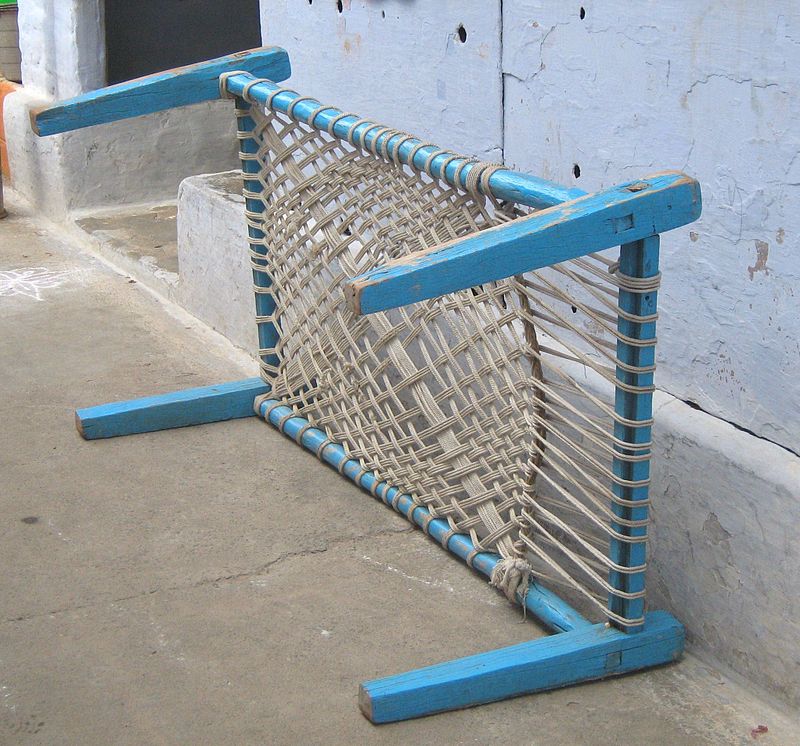 Charpai — tipped on its side for easy carrying — much like the one I slept on in Rajnagar, except the wooden framework and legs of mine were, like most charpais in village India, unpainted

No … Not that kind of hot night! I enjoyed precious few of those in Rajnagar. The hot nights I have in mind are the ones caused by actual heat — the kind I promised to write about at the end of last week’s post about restless nights caused by trying to sleep on bare concrete.

First let me say a little bit about heat in India. In the north-central Indian village of Rajnagar, where I lived and worked as a Peace Corps volunteer, 1968–70, we experienced three seasons: the monsoon (kharif, July-September), winter (rabi, daytime highs in the low 70s, nighttime lows in the upper 40s) and summer, known to the local folks simply as “the heat,” garmi.

The February transition from winter to “the heat,” with wonderfully mild days and nights, seemed to last just a couple of weeks at most. By April — and continuing till the start of the monsoon in early July — daytime temperatures would reach well over 100 degrees Fahrenheit (38 Celsius). I had a thermometer inside my house, and the highest to which I ever saw it rise was 117 F (47 C). That may have actually been hotter than outside in the shade of a tree, but I never tried to measure that. In the sun, let’s just say it was like Las Vegas in summer — without air conditioning.

I’d cope with the heat in two ways. One was to flee to the mountains. My first summer in India I took off for a couple of weeks with my Peace Corps friend Tom Farrell to Darjeeling — where they grow Darjeeling tea — in the foothills of the Himalayas, well north of Kolkata (formerly Calcutta). The next summer we headed for the Kulu Valley and Kashmir, about which I’ll write in a future post.

Of course two or three weeks in the more temperate mountains was not a long-term solution to three months of garmi in Rajnagar. So here’s how I coped with the heat when I couldn’t get away from it.

I’d get up at first light. More on that below. I’d go straight to my favorite tea stall for breakfast, then meet and talk with anyone in the village with whom I might have something useful to discuss. Because I was working with farmers whose main crop was wheat — which was sown after the monsoon when the ground was moist and harvested at the end of winter — there was little in that area for me to do in summer.

During garmi, the only things grown were a few hardy vegetables (e.g., bottle gourd, bitter gourd and eggplant) and pulse crops — legumes like lentils, chickpeas, mung beans and a small black bean called urad (black gram, a little larger than mung beans, which are green). I worked to see if I could interest some farmers in trying to improve pulse yields by treating seeds with nitrogen-fixing bacteria (rhizobia).*

After talking with a few farmers and other villagers, I’d go back home and spend the rest of the day doing my best to keep cool. Lacking electricity for a fan and running water for a shower, I’d strip down to shorts, walk 20 or 30 yards to the well, draw a bucket of water and pour it over my head. Then I’d sit and read on my small porch, shaded but open to any small breeze that might stir. After a while, I’d be dry and hot again, so I’d go back to the well for another bucket of water. In the early evening, I’d go back into the village, talk with a few more people, then return home to eat and go to sleep.

Since my house had been baking all day, I rarely slept indoors. Instead I’d move my bed outside to take advantage of any slight breeze. The bed was a charpai (literal translation: four legs) — see photo above — so it was light and easy to carry. The woven portion was covered with thin cotton quilting that served as a mattress, topped with a sheet. Deploying my mosquito netting would have defeated the effort to catch a breeze, so I’d sleep bare-chested in my shorts right in front of my house. 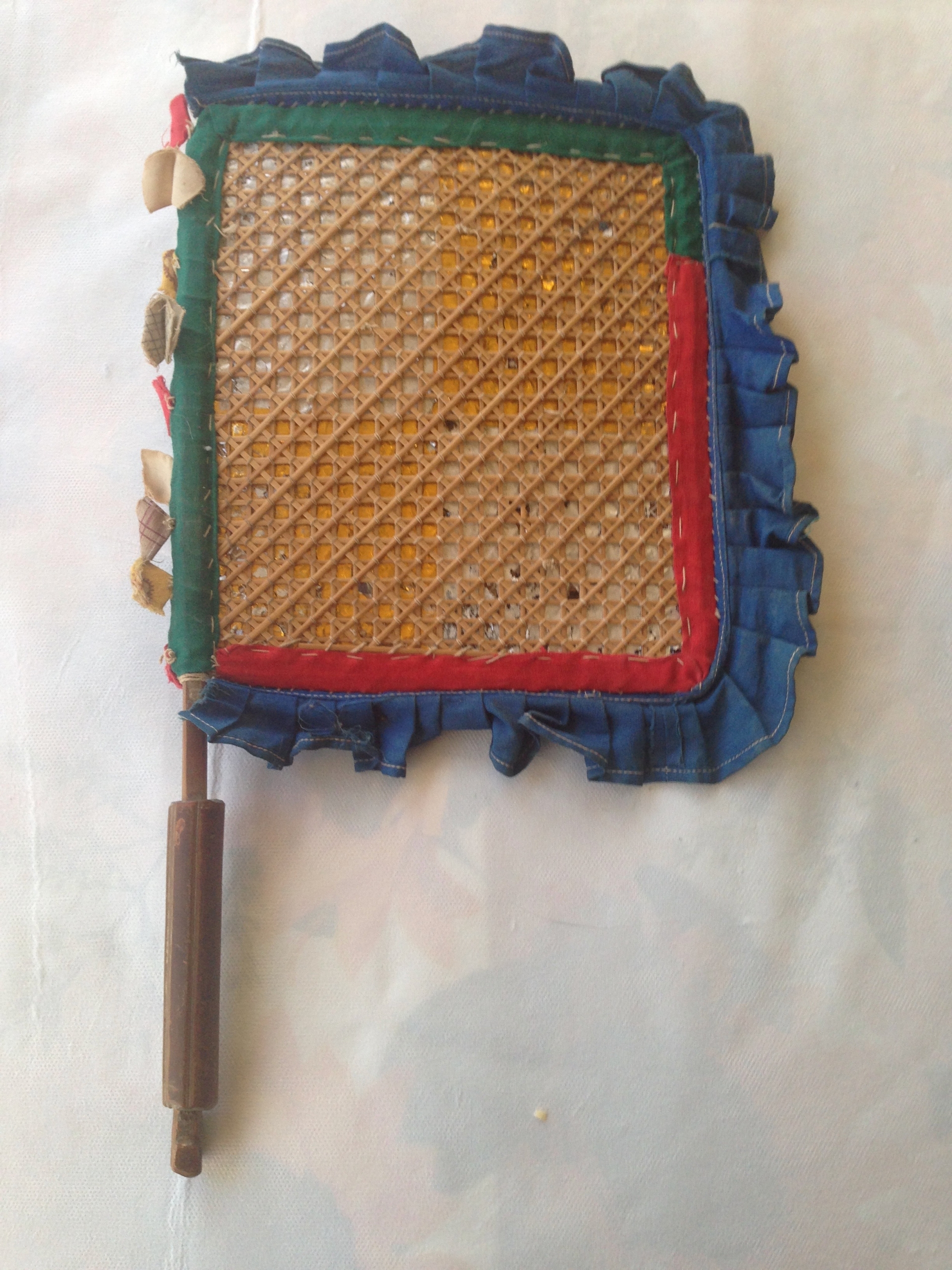 Falling asleep wasn’t easy. Even in the early hours of the night, it was still hot. So I’d cool myself with a hand-held fan till I finally dropped off. No, this was not the sort of wedge-shaped, foldable fan widely used in East Asia. Indian fans (panka — literal translation: feather) are like the one in the photo just above. This is the same fan I used in Rajnagar, which I’ve kept all these years. The handle is a length of bamboo enclosing a wooden rod, whose upper end is attached to a square fan stiffened by a light lattice. The lattice holds in place silver- and gold-colored foil “recycled” from the inside of cigarette packages. The fan’s ingenious design makes possible a rotary motion actuated by just a very light movement of the wrist. My panka got me to sleep every night.

Waking up was even easier. At first light, the flies would start buzzing, and that levitated me right out of bed.

So there you have it. The best way to beat the hot nights — and days — in Rajnagar.

* Nitrogen, essential for plant growth, is one of the key ingredients in fertilizer. While nitrogen makes up nearly 80% of the air we breathe, plants can’t absorb it in the elemental form (N2) in which it occurs in the atmosphere. To nourish plant growth, it must be combined with other elements in complex molecules found in both organic and chemical fertilizers, e.g., urea, ammonium nitrate (N2H4O3). Legumes, unique among plants, are capable of pulling nitrogen straight out of the atmosphere through their roots. They do it with the help of “nitrogen-fixing” bacteria — rhizobia — that form small nodules on their roots. Although rhizobia are normally present in the soil, applying commercially available rhizobia to legume seeds can boost the yield of the plant that grows from such treated seeds.