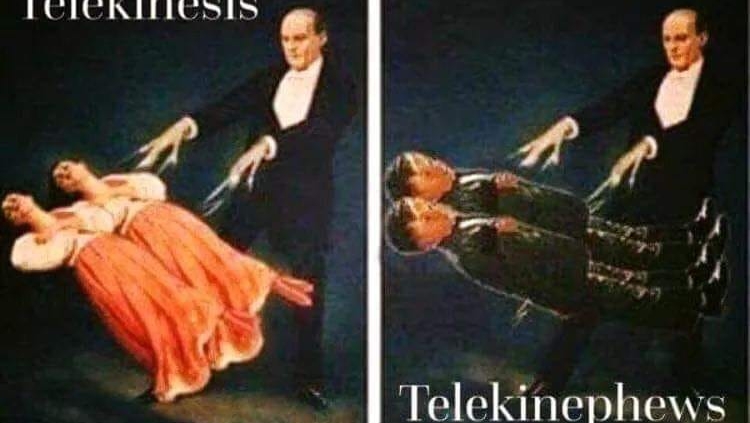 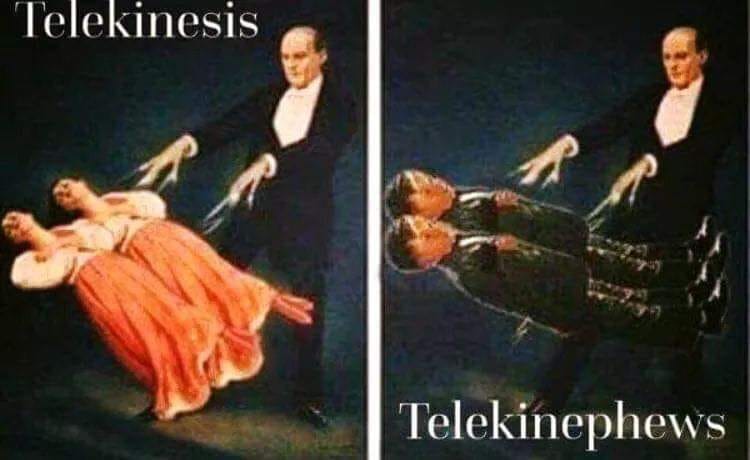 The illustration above, which I posted tongue in cheek on social media several weeks ago, depicts telekinesis.1 It reminds me of an actual demonstration of physical “levitation” — raising a recumbent person off the ground without actually touching him — that I witnessed some 50 years ago.

This is an unvarnished account of what I saw with my own eyes.

The levitation took place in an improbable location, the spartan training camp for the group of Peace Corps volunteers of which I was a member back in the summer of 1968.

There were probably about 30 to 40 of us trainees2 at the camp, located in Hemet, at the time a nondescript Southern California town3 that has since slid so far downhill as to have been included (in 46th place) in a list of the 50 Most Miserable Cities in America.4 Why am I not surprised! Our camp was not in the center of town, but on its outskirts — actually, as we were told, on the site of a former landfill. A dump.

Accommodations were spartan, although not uncomfortable. As I recall, we lived four to a bare-walled room in small, concrete-block structures. Toilets, showers and a dining hall were housed in separate buildings. If there was a blade of grass on the dusty grounds, I don’t remember it.

We spent our mornings in small groups scattered around the camp learning Hindi from a group of native speakers who in real life were Ph.D. candidates studying in the U.S. in a range of disciplines and who had been brought to Hemet that summer to teach us Hindi.

Learning the language was by far the best part of our training. After a break for lunch, we’d leave the camp for nearby fields to — nominally — learn something about agriculture. Although we didn’t know it for sure when it got underway, our “technical training” turned out to be useless. We were taught, for example, to drive tractors and to siphon water onto a field from an adjacent irrigation ditch. However, neither of these skills would ever be called for in the villages where we would later live and work. We had book learning too — a superficial repeat of high school biology in which we were taught, among not much else, about how seeds germinate. None of this was applicable to the practical knowledge we’d need if we were to actually be of assistance to the farmers with whom we’d soon be working in village India.5

At night, those of us looking for a little local color would wander across the street for beer and burritos (this was my first encounter with these bean-filled torpedoes) at an establishment that, if rated by Zagat, would have been hip-deep in negative territory.

My favorite place in Hemet was an abandoned apricot orchard adjacent to our training camp. After dinner, some of us would stroll through the trees, talking and picking sun-ripened fruit straight off the low branches. That orchard was a ray of sunshine.

It was brought to us courtesy of several of our Hindi teachers, a group whose interests and academic backgrounds were wide and varied. Several of them enjoyed talking with those in the group who were interested in Indian spiritual beliefs and practices. Being irreligious, uninterested in spiritual topics and deeply skeptical of “supernatural” or “paranormal” claims, I was not one of those who’d take part in these discussions. Still, by about the sixth week or so of our training, word got around that one of the language instructors had agreed to demonstrate levitation to a couple of guys with a deep interest in Hindu spiritualism.

The demonstration was to take place that night after dinner in the instructor’s room. The real miracle of the evening is that the small room failed to burst at the seams in response to the crowd that gathered to watch the promised spectacle. I doubt that a single soul in the camp failed to show up.

This is what I witnessed: The Hindi instructor-spiritualist-levitator-guru sat cross-legged at one side of the room. On mats in front of him lay two guys — the levitation subjects — on their backs, with their heads closest to him. In this position, they could see up and in the direction of a great many in the assembled multitude.

With the lights off, the room was illuminated only by a number of fragrant candles, to whose aroma was added the scent of burning incense. The guru spoke to us all about Hindu spirituality, the nature of the feat he was about to attempt, the powers he was going to invoke. For at least 10 minutes, he radiated knowledge and authenticity. Something out of the ordinary was about to happen.

Then the guru rose. He chanted. He stretched out his arms, with hands and fingers pointing forward and downward … transmitting unseen energy into the recumbent forms at his feet. For another three or four minutes he continued chanting and moving his hands and fingers in a way that clearly appeared to be directing energy at his two subjects.

Two confederates suddenly appeared, as if out of nowhere …

As they say in science … Q.E.D. Quod erat demonstrandum. “That which was to be demonstrated!”