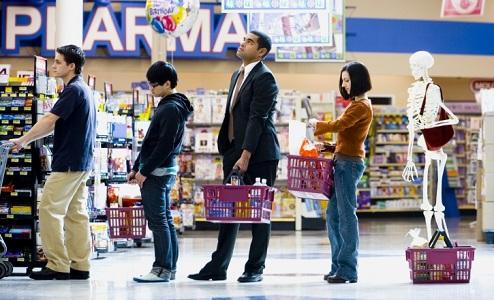 Have you ever been in a store needing assistance when a clerk or barista who’s just finished helping another customer asks, “May I help who’s next?” It’s happened to me more times than I can count – umpty-ump times at least, if not skatey-eight, as my mom used to enumerate such things.

In checking to see what the language mavens make of this illiterate-sounding turn of phrase, I’ve found several of them trying to excuse it on the grounds that it’s a revival of an “extinct construction type” (they call it a “fused relative”) that dates back to Shakespeare’s time. However, even one of these linguistic archeologists admits that reports of this phrase emerging into the vernacular date only from the 1990s – a time, I would suggest, when the downhill acceleration of young people’s (e.g., many baristas’) education had clearly passed the point of no return.

In the forlorn hope that a better way of inviting the next person in line to step forward will somehow find its way to a critical mass of retail supervisors and barista trainers, I’d suggest that employees be urged to say, simply, “May I help the next person?” or “May I help whoever is next?” (And not whomever!)

I’ll step off my soapbox now. Until next time!

Beethoven Would Not Have Survived This Recital, But …
Scroll to top