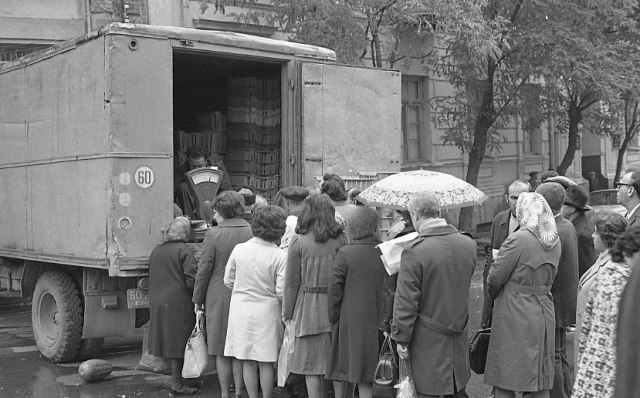 A couple of weeks ago, I posted an item from the time I was working at the U.S. consulate in Leningrad. It was about my very young daughter Naomi and her friend Perry. Today’s post is a story told to me back then (probably in early 1978) by Perry’s father, whose name I regret I can no longer recall.

A professor of mathematics, Perry’s dad was in Leningrad as part of an exchange between the (U.S.) National Academy of Sciences and the Soviet Academy of Sciences. As he explained to me at the time, a mathematician’s job is, in essence, to think, and it’s not always necessary to sit at a desk or stand at a blackboard to do it. Mathematicians can think anywhere. So from time to time he would do some of his thinking while exploring the city. He told me that in the months he was there, he rode all of Leningrad’s Metro lines from end to end, getting out at each station to walk around each neighborhood.

One day, he told me, while on one of these walks, he came across a long line of people, patiently queued up at a sidewalk kiosk where something desirable and not ordinarily available in the Soviet consumer economy was being sold. So he did what he’d learned any Leningrad resident would do. He pulled out his “perhaps bag” (avoska – авоська) and got in line.*

It turned out that imported oranges were being sold at the kiosk. As my friend finally got to within two or three places of the front of the queue, a car drove up to the curb and disgorged a clearly well-fed man who exuded an air of authority. Waving a red identification card that apparently signified exalted status, he inserted himself right behind the person then in the midst of a purchase. No one uttered a peep of protest.

This did not sit well with my friend. So he reached for his wallet and pulled out his MasterCard – something no ordinary Soviet citizen would ever have seen. He then stepped up to the bigwig, tapped him on the shoulder, flashed the MasterCard … and got the jerk to step meekly aside for him.

As the concluding line in a long-ago ad for a MasterCard competitor used to go, “Membership has its privileges”!

* For readers unfamiliar with life in the “workers’ paradise” that the USSR claimed to be, consumer goods were poorly supplied, expensive and often shoddy. Sometimes, goods would be sold not in stores, but from street kiosks or even directly from the back of a truck. (The above photo of people queuing up to a truck, a common sight, was taken in 1976, the year I began my assignment in Leningrad.) People would often carry an empty “perhaps bag” with them to be able to take advantage of the availability of some interesting item they might perhaps come across when walking down the street. Sometimes they would stand in line to buy something they didn’t even need, knowing they could later barter it in exchange for something more useful to themselves.

An American exchange student in Leningrad once told me of having witnessed a man who had managed to buy the last jar of pickles being sold from the back of a truck. The shopper had a beatific look on his face, the student told me, as if he’d had the most extraordinary piece of good fortune.

A Chilling Tale From a Cold Moscow Night
0 replies

‘Reticent’ vs. ‘Reluctant’
Scroll to top