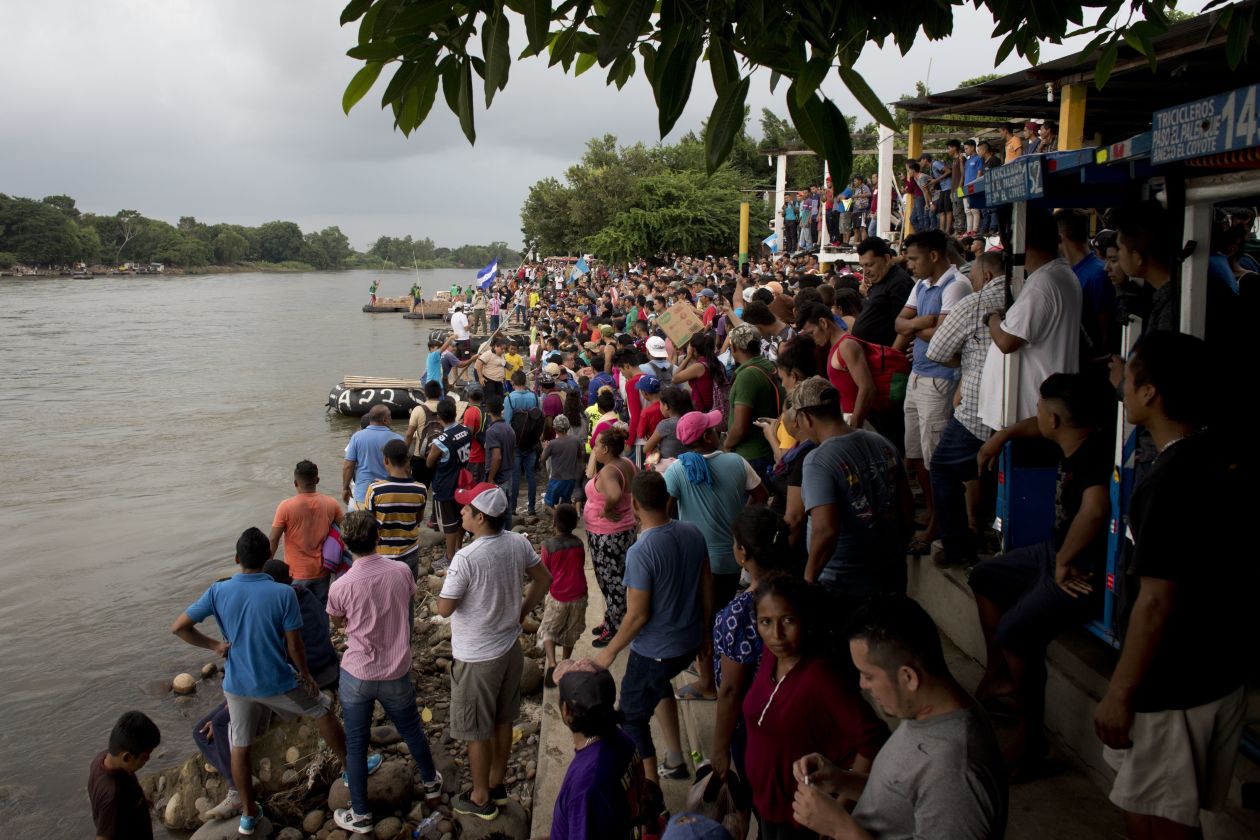 I began writing this post two days ago after reading about the “caravan” of several thousand Honduran migrants that has been halted at Mexico’s southern border. If and when they are eventually allowed to cross into Mexico, it appears that most of them hope to keep heading north to the U.S. Presumably, most would then be stopped at the U.S. border, but some, perhaps many, might find their way across despite not having entry visas and become undocumented … illegal … you decide how to label them.

From what I’ve read, most of these migrants are fleeing the terrible violence that appears to be endemic in much of Central America. A friend of mine, a former officer in the U.S. Foreign Service who spent a good deal of his career in Latin America, once told me about the routine violence in Central America — including alcohol-fueled machete killings — that he was personally aware of.

Other migrants from the nations to our south, including Mexico, are motivated by the economic opportunity they see in our country.

In my mind, the issue is far bigger than Trump, “the wall” and even the inexcusable separation of children and parents that has been taking place along the U.S.-Mexico border. (In regard to family separation, however, I should note that I have seen reports to the effect that although it is now taking place on a larger scale, the practice actually predates the Trump administration. It is also what routinely happens when parents — U.S. citizens, mostly — are arrested, leaving no adult at home to care for the children, who often then enter the foster care system.)

The big issue, for me, is what America’s immigration policy should be. It’s hard to disagree with the argument that because we cannot, as a practical matter, absorb all the world’s poor and oppressed, or even a significant fraction of them, we must somehow control the number of those we allow to enter. (Of course, no one is suggesting that all the world’s poor and oppressed wish to come here. Moreover, of those who do come, most immigrate legally and many are neither poor nor oppressed, but want simply to improve their lot in life.)

Perspective
I think it’s important to inject perspective into the discussion. Some quick internet research shows that the present proportion of immigrants in the U.S. population is no higher than it has historically been. (See orange line on the graph below.) Immigrants, presumably including both legal and not-legal, constituted about 13.5 percent of our population in 2016 (43.7 million out of 323.4 million). This compares with a range of 13 to 15 percent of the total population in the period 1860–1920, which includes the high tide of immigration, mostly from central, eastern and southern Europe. 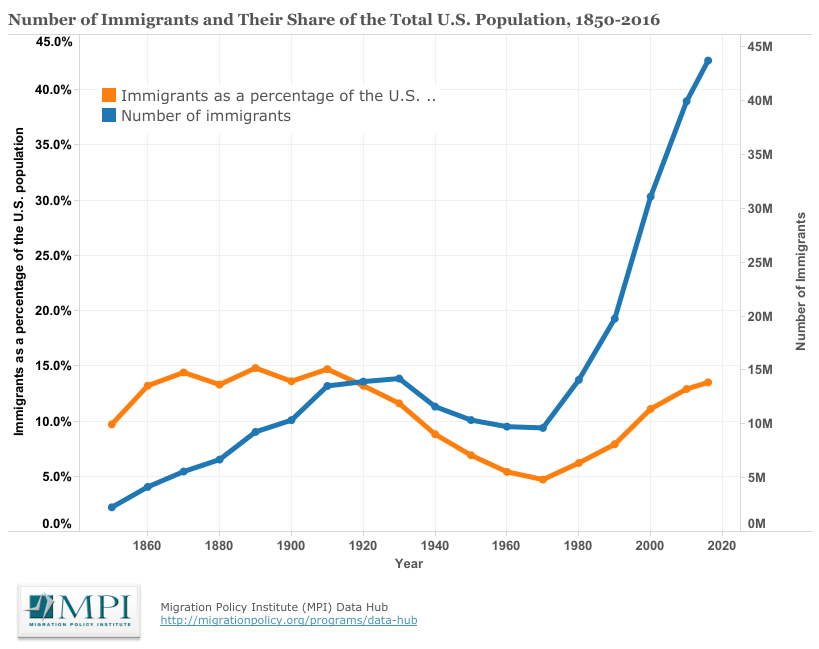 One significant difference between the influx of the late 19th and early 20th centuries and that of the present day is that in the time of my grandparents (see more on this below), the immigrants represented a great mixture of national origins, religions and cultures, whereas today the largest proportion of migrants comes from Mexico and elsewhere in Latin America, although with a significant admixture of arrivals from China, India, the Philippines and many other countries. In 2016, Hispanics* represented about 45 percent of the entire immigrant population — a big chunk, but not a majority.

The large Hispanic slice of the immigrant population contrasts markedly with the smorgasbord of cultures and nationalities that comprised my grandparents’ immigration wave. And while “nativist” sentiment has long thrived in some quarters of America’s population, the high visibility of Hispanics among today’s immigrants has clearly helped fuel a resurgence of such regrettable attitudes.

A little personal reflection
Researching these trends and statistics has given me priceless perspective on the immigration issue. But even more valuable has been the realization, jarringly brought home to me from reading about the Honduran caravan, that the impetus for this wave of migrants is precisely the same as the factors that brought immigrants to America since the earliest days of what were then the English colonies — and this includes all four of my grandparents** — flight from persecution and the lure of economic opportunity. 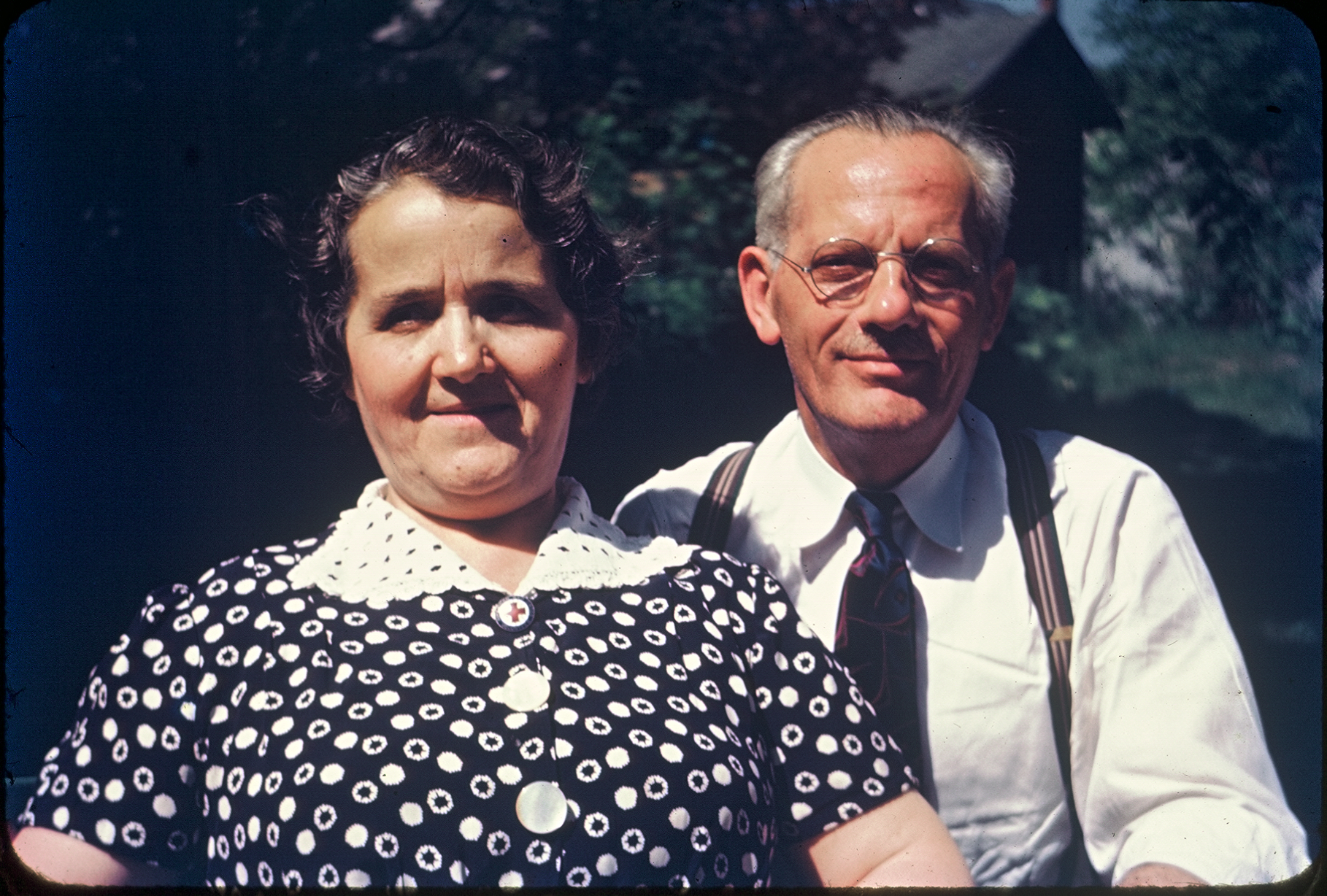 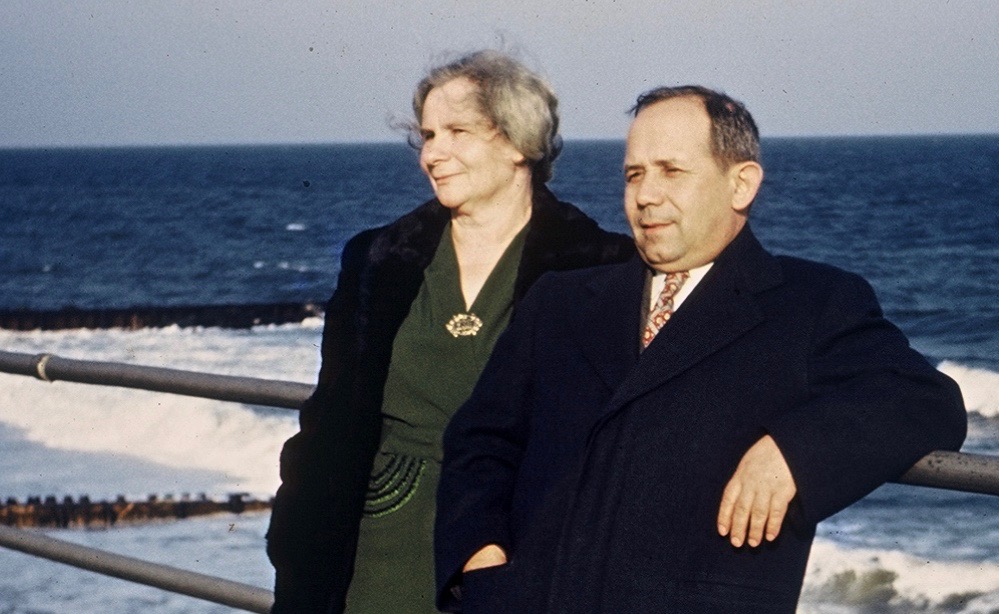 My mother’s parents came here in 1905 from Ukraine and Belarus, both then part of Czarist Russia. My paternal grandparents came in 1911 from Lithuania, then also ruled by Czarist Russia. Both grandfathers were anxious to leave Russia to avoid conscription into the czar’s army, a notoriously inhospitable place for Jews. My maternal grandfather’s desire to leave was further motivated by (1) the fact that Russian soldiers were then being sent to the Far East to fight Japan (the Russo-Japanese War, which Russia lost) and (2) a wave of terrible pogroms, in which several thousand Jews were murdered.

So, while it’s clear that the United States can hardly receive all those who might wish to come here today, it’s easy to empathize with those who are fleeing appalling conditions and want to build new lives in the land of liberty, safety and opportunity. S.S. Kaiserin Auguste Victoria, the ship that brought my paternal grandparents to the U.S. (named for the wife of Germany’s Kaiser Wilhelm)

In so many ways, this is actually a good problem for us to have, much better than the problems of the nations whose people want to leave! We need to find better ways to handle the challenge.

* In 2016, most (about 90 percent) U.S. Hispanics were American citizens, both native-born and naturalized. In fact, nearly half of this country’s entire immigrant population held U.S. citizenship. The other half of America’s immigrants were green card holders, holders of student and work visas, refugees and asylum seekers as well as the undocumented. However, the undocumented segment totaled some 11.3 million (in 2013) or only a little over a quarter of the entire immigrant population — a high proportion, certainly, but a much smaller one, I suspect, than many people imagine.

Of the 22 percent (65.6 million people) of U.S. residents age 5 and older who spoke a language other than English at home in 2016, Spanish was certainly most prevalent (62 percent). Chinese and Tagalog were next, at 5 and 3 percent, respectively. Vietnamese, Arabic, French and Korean came in at about 2 percent, and nine more languages — including Russian, German, Haitian Creole, Hindi, Portuguese, Italian and Polish — each accounted for about 1 percent.

** A bit of family lore: The ship carrying my mom’s dad arrived in New York Harbor on July 4, 1905. Thanks to the holiday, the immigration officers at Ellis Island had the day off, so all the passengers had to stay aboard an extra day before they could disembark. My dad’s parents arrived on Sept. 23, 1911, a year to the day before my dad, their first child, was born.