… carve a turkey … or slice a banana.

Yes. And I’ve witnessed it.

As regular readers of this blog will recall, last week I wrote about my grandson’s bar mitzvah. That got me thinking about my own bar mitzvah, back in 1957.

That was a significant year. It was when the USSR put the world’s first artificial satellite — sputnik — into orbit.1 And when President Eisenhower called in the U.S. Army to enforce school desegregation in Little Rock, Arkansas. Also in 1957, six European countries signed the Treaty of Rome,2 establishing the Common Market (European Economic Community or EEC), which would eventually expand and morph into today’s 27-nation European Union (EU). In Africa that year, the process of decolonization got underway with Great Britain granting independence to Ghana.

My own bar mitzvah was a little less noteworthy. I won’t go into any details here except one — it was the occasion when I learned that you didn’t necessarily have to open up a banana or a roasted turkey to slice it.

As with so many other things I picked up in my youth, it was from my dad that I learned this. Let’s start with the turkey, which he didn’t pre-slice himself, but which gave him the idea for the banana.

My bar mitzvah was held in Asbury Park’s (New Jersey) Orthodox synagogue, and lots of family members, mostly from the New York area, were there for the occasion. What do you do when you have a lot of guests? You feed them. But doing this presented Mom with a little problem. How to prepare and lay out a nice buffet at home when we were all in shul (Yiddish for synagogue)? The answer: Have her good friend and food maven Sylvia, who ran a catering service, do it while we were all out of the house. The centerpiece of the buffet that Sylvia prepared was a roast turkey. It sat beautifully in its crisp golden skin on a platter, looking as if it had just come out of the oven.

But it had actually been cooling for a little while. Long enough for the deft-fingered Sylvia to have carefully opened and peeled back the skin around the breast, neatly sliced it, and then tidily sewn it all up again so that the incision was hardly noticeable. Once we and our guests arrived back home, of course, the turkey’s skin was again peeled back, exposing cleanly cut slices ready to be served. No fuss, no muss … and a great many ooh’s and ahh’s of wonderment, especially from my aunts and cousins.

Several days earlier, while the bar mitzvah planning and preparations were still underway, my mom had told Dad about the presliced turkey, and it had obviously made an impression on him. So he took the idea, applied it to a banana and tried it out on me. At breakfast a few days before the bar mitzvah, he asked if I’d like to have some banana slices in my cereal. I did, and when I peeled the banana he then handed me, I was flabbergasted to see it was already sliced. 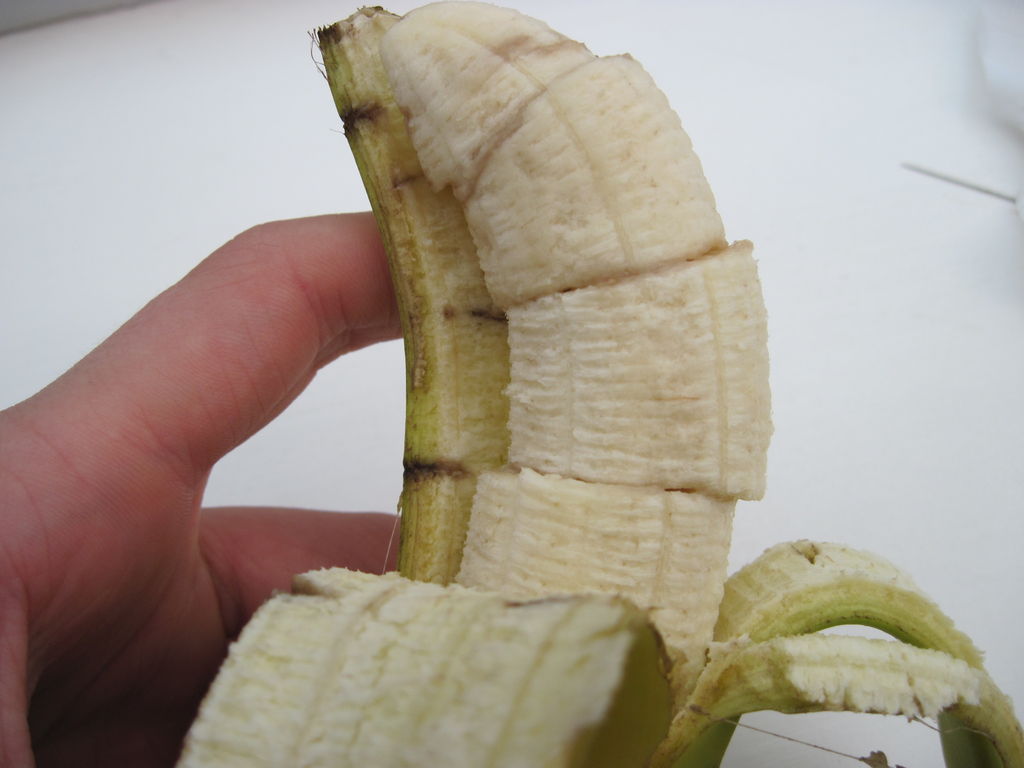 A presliced (through the skin) banana

Knowing this had to be a trick, I asked how he’d done it. He obliged by showing me how to preslice another one. He carefully poked one of Mom’s sewing needles through the banana skin just at one of the points where the skin makes an angle. With the needle inserted almost all the way through the banana, he swiveled it from side to side, cutting clear through the banana without leaving a trace of his efforts on the skin other than a tiny needle hole. He then repeated this step, moving along the angle line on the banana skin (where it would hardly be noticeable, especially if the ripening banana had begun developing brown spots) until he had presliced the entire thing.

Jumping forward now to the day of my bar mitzvah, among our guests was a young second or third cousin on Mom’s side of the family, who, with her parents, had driven up to New Jersey all the way from North Carolina for the occasion. She too had been amazed by the presliced turkey, and when she expressed her surprise, my mischievous dad asked her, with a straight face, if they didn’t raise presliced turkeys in her home state. She was just young and gullible enough to take this joker seriously, and Dad then administered the coup de grace. He offered her a presliced banana and told her that this was how we got them in the supermarket “up here in the North.”

The puzzlement was writ large on her face, and Dad clearly enjoyed his little gag.

Our Deepening Crisis
Scroll to top