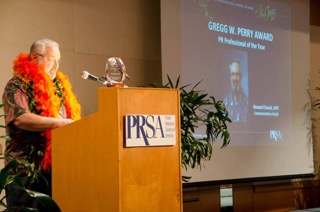 I would like to thank the members of the committee who took leave of their senses, selected me for this honor and encouraged me to take leave of my own senses to accept it.

I think there are probably a dozen or more people around the tables here this evening who have done more to earn such an honor than I have. So I accept this award with great humility and in the name of all the first-rate professionals here tonight – and the many others around the state who are not with us this evening – who may never be singled out for such singular attention, but whose work merits the highest recognition.

I’d like to talk briefly about why I think the work we all do – the work of public relations professionals – is important and helps make the world a better place.

I’ll start by telling you that when I went off to college, thinking about a future career, PR couldn’t have been farther from my mind. I wanted to follow in the footsteps of my father, who was an innovator. He was a pioneer in the field of designing and manufacturing electric guitars and musical instrument amplifiers, but the essence of what he did was to create things that brought people pleasure. So as I entered college, I thought I should study science or engineering so I could do something like that too – or perhaps create things that would help make life easier for people. I felt that this was the highest calling a person could aspire to.

Then, in my freshmen year, I came within a whisker of flunking both calculus and chemistry. The next year, after flirting with disaster again in physics, I realized I wasn’t smart enough to make a career in science or engineering. So I majored in the humanities – Russian area studies, to be specific … but to say anything more about that would set me off on a tangent.

I had my next epiphany several years after graduation while I was a Peace Corps volunteer in India, where I lived in a village and worked with farmers. Perhaps the most important thing I learned there was that all honest work is honorable and worthwhile … that the most important thing a person can do is to provide for his or her family … and that the illiterate Third World farmer who can plow a straight furrow behind a pair of oxen is a professional worthy of respect.

Fast forward to my work as a Foreign Service officer with the U.S. Information Agency – my first exposure to public relations, although I was unaware of it at the time. Let me tell you how I came to work for USIA. It had, in part, to do with my interest in foreign affairs and current events. And it was also related to my background in Russian studies. I spent most of the summer of 1967 – between my first and second year of graduate school – in the Soviet Union, working to build fluency in Russian. I was enrolled in a program at Leningrad State University, and one of the things you couldn’t help noticing that summer in Leningrad was that it seemed every second or third person you’d see on the street was wearing a lapel pin indicating they’d been to see the USIA exhibit about life in the United States, which was there that summer thanks to the U.S.-Soviet Cultural Exchange Agreement. My conversations with the many Russians I met made it clear that people in that tightly closed society were hungry for knowledge about the outside world, and particularly about the United States.

So when I took the Foreign Service exam that fall and had to respond to the question of whether, if I passed, I would prefer to work in the State Department or USIA, the answer was obvious. Moreover, this was just a few years after JFK’s presidency, and I remembered that he had named the distinguished journalist, Edward R. Murrow, as USIA director. So for me, USIA was a no-brainer.

Now, the work USIA does is encapsulated on a plaque outside its headquarters in Washington, D.C.: “Telling America’s Story to the World.” USIA people now refer to this work as “public diplomacy.”

In any case, I found that telling America’s story to the world – engaging with foreign audiences about what makes our country tick and explaining the roots of American foreign policy – was a very worthwhile and satisfying calling.

I remember once having lunch with a senior colleague and asking him how he happened to come to work for USIA. He told me he’d been in advertising for years, and one day spoke with a USIA acquaintance who urged him to make a career change. “Do you want to keep selling hot dogs for the rest of your life?” his friend asked.

Well, I’m no longer in the Foreign Service, and I am now in the private sector, working in PR. And while I’ve never been called upon to sell hot dogs, my company, Communications Pacific, counts McDonald’s as a valued client. So I suppose it can be argued that I’ve helped sell hamburgers.

But putting my experiences together, I understand that the essence of what I’m doing – what we all do in this profession – is presenting information to people who, like the residents of Leningrad in the Cold War era, need to be better informed.

Public relations – informing people – is important, honest work. And, to put in a plug for the particular PR niche I’ve carved out as my own – clear, strong, effective writing with which to tell our clients’ stories – I find it as worthwhile as creating innovations that make life easier or more enjoyable for people … telling America’s story to the world … or plowing a straight furrow behind a pair of oxen.

I’m proud to be in this profession, I’m grateful to all of you for this great honor, and I tip my hat to all my colleagues who work as hard and creatively as I try to do in telling our clients’ stories to the world, but who have yet to be honored as tonight you have honored me. Thank you all so very much.