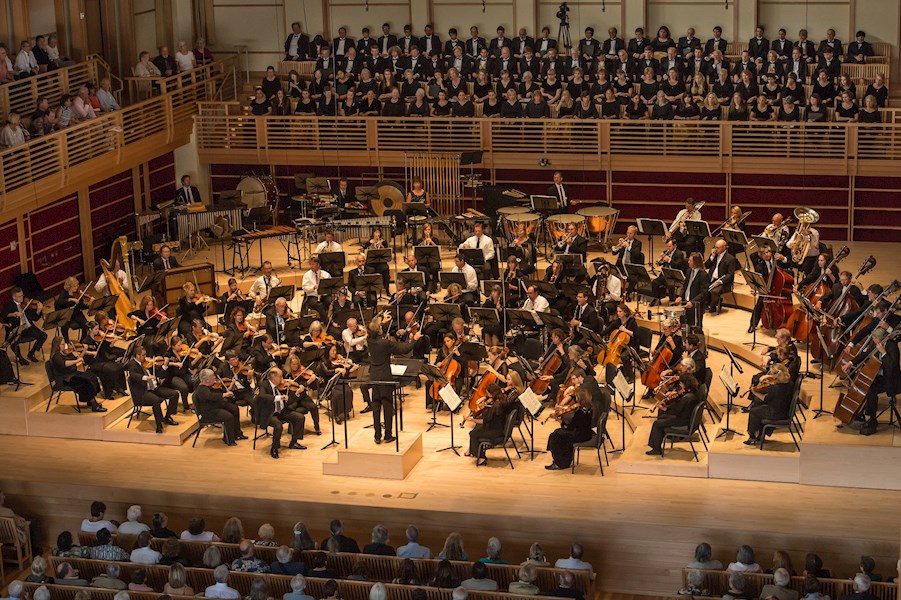 Last Saturday evening Sandra and I attended a concert by the Santa Rosa Symphony. The orchestra’s music making, as always, was wonderful. But a sour note, for me, was one I’ve been hearing, with increasing frequency, in recent years — the need to endure the performance of dissonant modern compositions as the price to be paid for hearing music I love. I hasten to add that this problem is not confined to the programs of the SRS. In my experience, it plagues most of the country’s orchestras.

Let me state my preferences plainly. First, I love live performances of classical music, orchestral works in particular, although I also greatly enjoy recitals by pianists, violinists and other instrumentalists. There is a dimension to live music that simply cannot be captured by listening to the same pieces on CDs at home, even with excellent equipment. Sandra and I especially love sitting in the balcony above the stage, a fabulous vantage point from which to see not only the conductor and soloists, but all the musicians — strings, winds, brass, percussion — coming together in glorious sound.

Second, I particularly love music of the romantic era, i.e., most of the 19th and, to a certain extent, early 20th centuries. I also greatly enjoy a lot of works from the baroque and classical periods. It’s hard to pick favorites from among many brilliant composers, but among those whose work I especially love are the “three B’s” — Bach, Beethoven, Brahms — as well as Chopin, Dvorak, Mendelssohn, Rachmaninoff, Saint-Saens, Schumann, Tchaikovsky and Wagner. 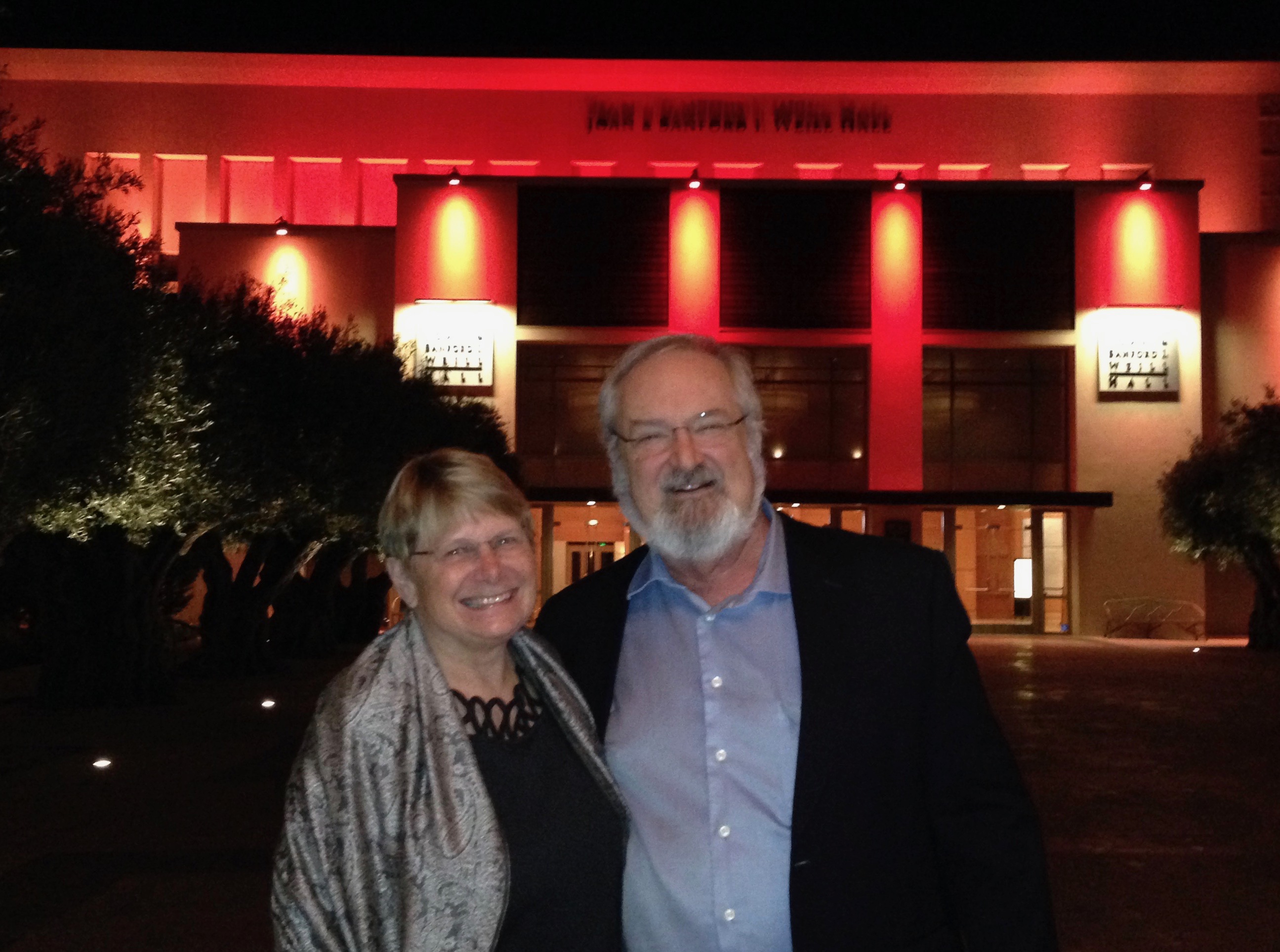 For me, the 20th century is a mixed bag, but I enjoy a lot of music by Copland, Gershwin, Respighi, Sibelius and Stravinsky, among others. The modern pieces I like best are generally those where melody, harmony and overall beauty outweigh dissonance.

My problem with the programming of most orchestras today is the imperative they seem to feel to “educate” audiences about modern, postmodern and contemporary compositions — music that is not always easy to listen to. Much of it is dissonant. Some, in my view, is downright ugly.

When I go to a concert, I want to hear music I enjoy. I am familiar with many of the major works of the old masters of the 18th and 19th centuries, and I never tire of hearing them performed live. Each time, I hear something new and captivating, even in works I know. I am also happy to be introduced to new (to me) compositions written in a style I find appealing. But I do not go to concerts wishing to have my eardrums assaulted by music written by composers more concerned with exploring the outer limits of experimentation than with pleasing the taste of listeners like me who are not ashamed of a preference for the “old warhorses” of the classical repertoire.

A Little Secret
Allow me to let you in on a little secret from a musical insider: I’m not the only one who doesn’t much care for most modern or contemporary music. A great many concertgoers don’t either.

This secret was confided to me in 2011 by Steven Monder, the then-not-long-retired president of the Cincinnati Symphony. I was living in Hawaii at the time, and the Honolulu Symphony Orchestra, after years of financial trouble, had gone bankrupt and was dissolved. Its assets, most notably an irreplaceable music library, were to be auctioned off. Monder had come to Hawaii as a consultant to the Musicians Union, to which all the Honolulu Symphony players belonged.

As a music lover, writer and, at that time, public relations professional, I was doing what little I could — mostly researching and writing — to contribute to what I hoped would be a rebirth of orchestral music in Hawaii. I also tried to meet with as many of those in a position to advance the cause as I could. Monder was one of those I spoke with. Foremost among the ideas I was suggesting* was that the best way to enlarge the audience for orchestral music, at least in a somewhat musically unsophisticated community, would be to offer more of the sort of classical compositions that have wide appeal and less of the sort that is harder for a broad audience to enjoy.

Ultimately, the musicians and a group of extraordinarily civic-minded people — who dug deep into their pockets, bless them — managed to midwife the rebirth of the orchestra, now known as the Hawaii Symphony Orchestra. (As best I can tell from afar, it is now thriving.) It was while I was trying to help out that I had a gratifyingly long meeting with Monder. That’s when he told me his “secret.” He said that among orchestra management professionals, it’s well-known that if you program a concert with an unfamiliar piece after the intermission, a large chunk of the audience will simply not return to their seats.** That, he said, is why modern pieces are almost invariably performed in the first half of a concert program. Just as they are here in Santa Rosa.

Concert Programs and Restaurant Menus
I’ll now turn to the thought implied by the title of this post, “Prix Fixe Concerts,” which suggests a comparison between concert programs and restaurant menus. The beauty of a restaurant menu is that it gives you a choice. If you don’t want beef, you can order fish or fowl. This doesn’t work at a concert. The program is fixed, just as in the case of a restaurant that serves only a prix fixe dinner. In both cases, the element of choice is missing and you must take whatever you are given.

Few restaurants offer prix fixe meals exclusively, but in the case of those that do, you still have a choice — you can eat at another restaurant. Such an option is lacking in the world of classical concerts. If you don’t care for what’s on the menu, i.e., the program, you can stay home or go to a movie.

To take the analogy one step further, even with a prix fixe meal you don’t have to eat everything on your plate. If you don’t like kale or Brussels sprouts, for example, you can ignore them. This doesn’t work so well at a concert. If you don’t like the work of a composer (OK, a modern composer) on the program, you have to sit there and pray for a quick end to the piece you dislike. The alternative, if you want to spare your eardrums, is to leave the hall before it begins and wait in the lobby till the piece is finished.

What Am I Arguing For?
So what, you might ask, am I arguing for? I’d like to see more concerts — not all concerts, mind you — where the program consists only of relatively familiar, widely enjoyed compositions by composers like those I mentioned above. I would find such programs delightful.

I believe I am not alone in preferring such programming. If it were to be presented more often, could those who enjoy modern, sometimes cacophonous (to my ears) music still be accommodated? Absolutely. I’m not suggesting that concerts that include modern compositions be altogether eliminated from orchestral programming. Only that they be presented less frequently. Not in practically every concert. 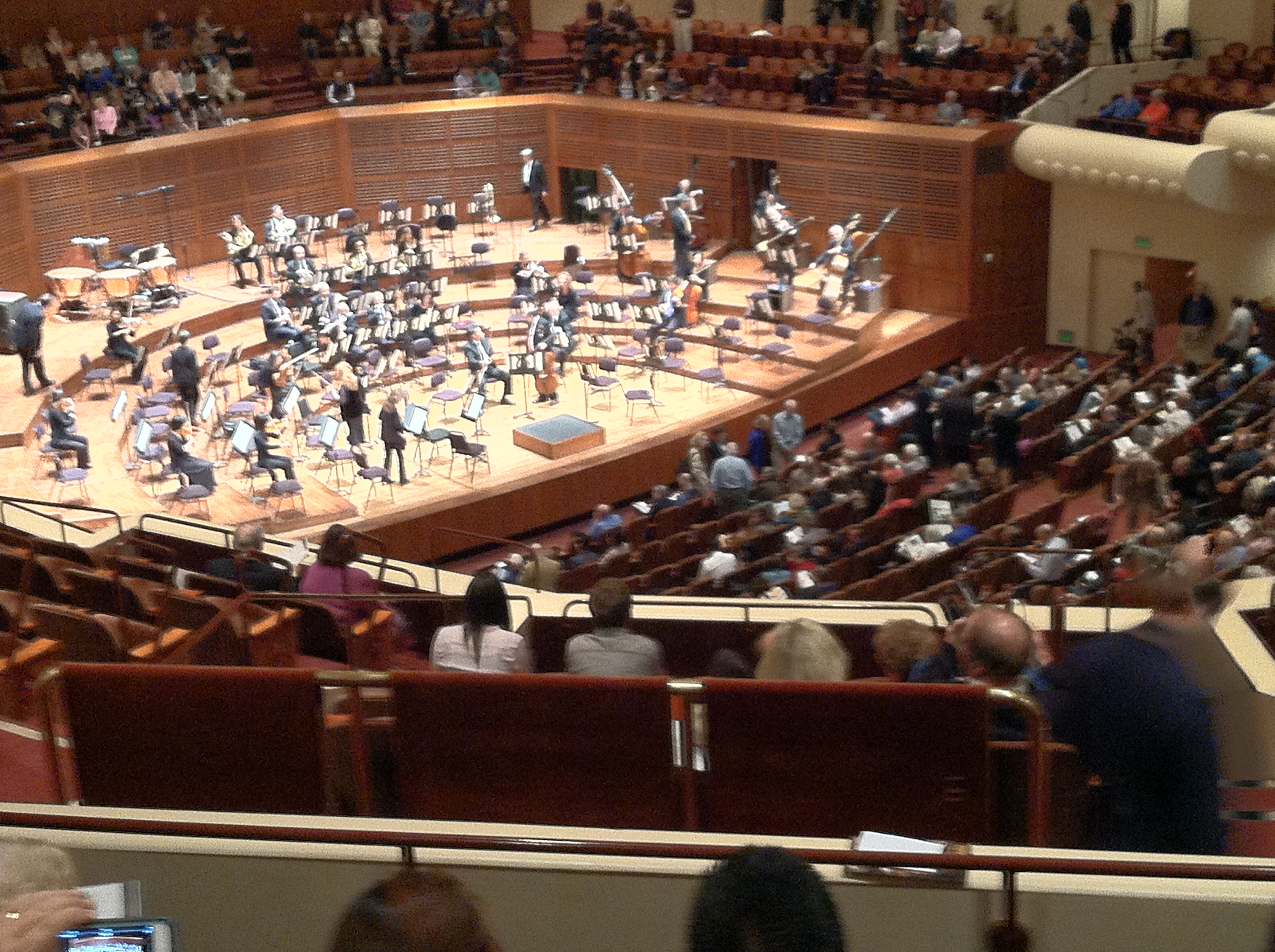 San Francisco Symphony musicians returning to the stage as intermission is about to end (photo by Howard Daniel, from our seats in the nose-bleed section)

Here’s an example from real life. For a few years, Sandra and I subscribed not only to the concerts of the Santa Rosa Symphony but also to those of the San Francisco Symphony. The SFS presents many more concerts each year than the SRS. As a result, when purchasing tickets, we were able to pick concerts that presented only pieces we knew we’d enjoy. Such concert programs were far fewer than those that included the almost inevitable modern piece, but we still managed to find what we wanted. However, in recent years, to my disappointment, we have found such concerts ever fewer and further between. 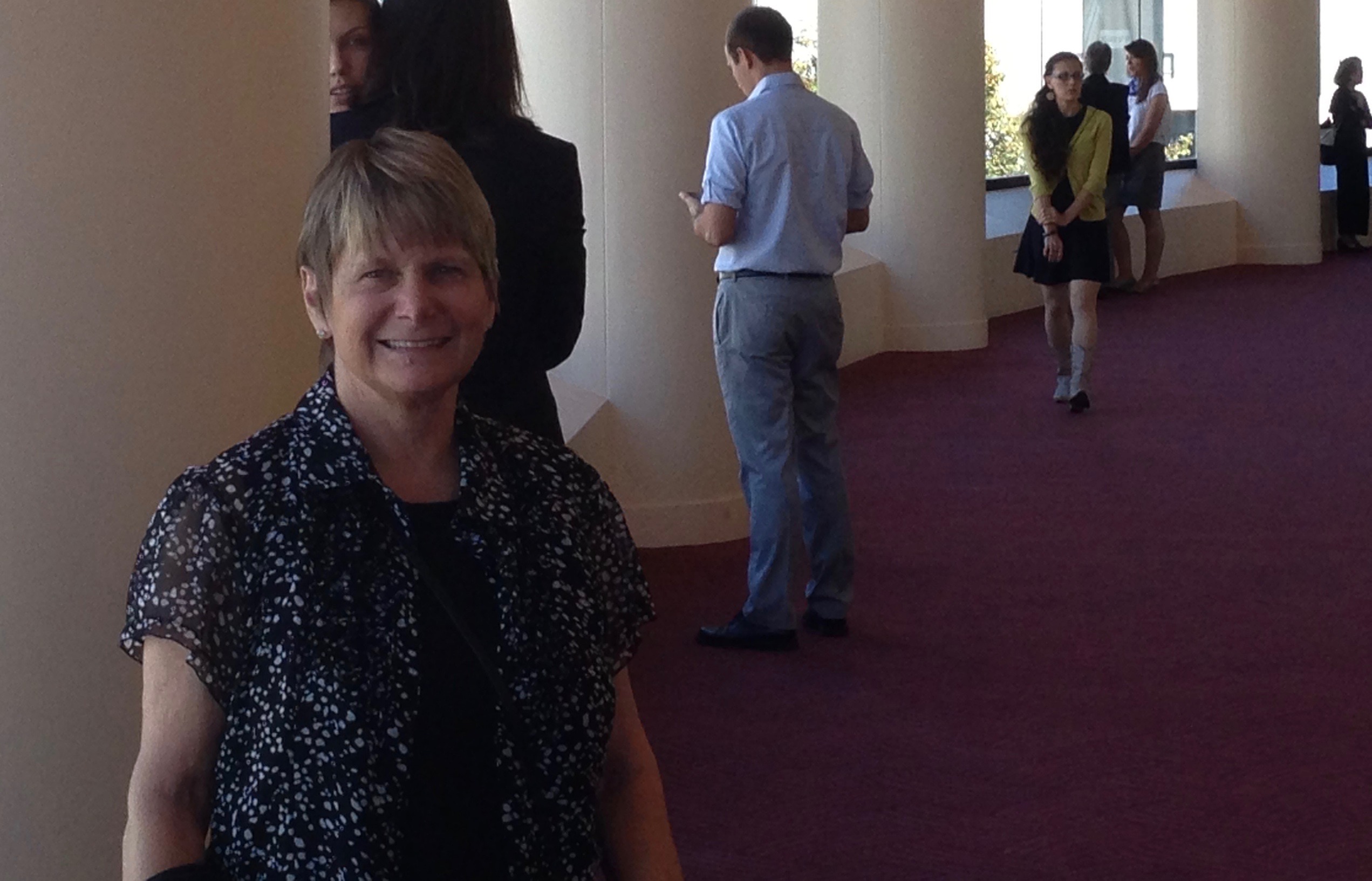 Sandra in the lobby of Davies Hall, home of the San Francisco Symphony 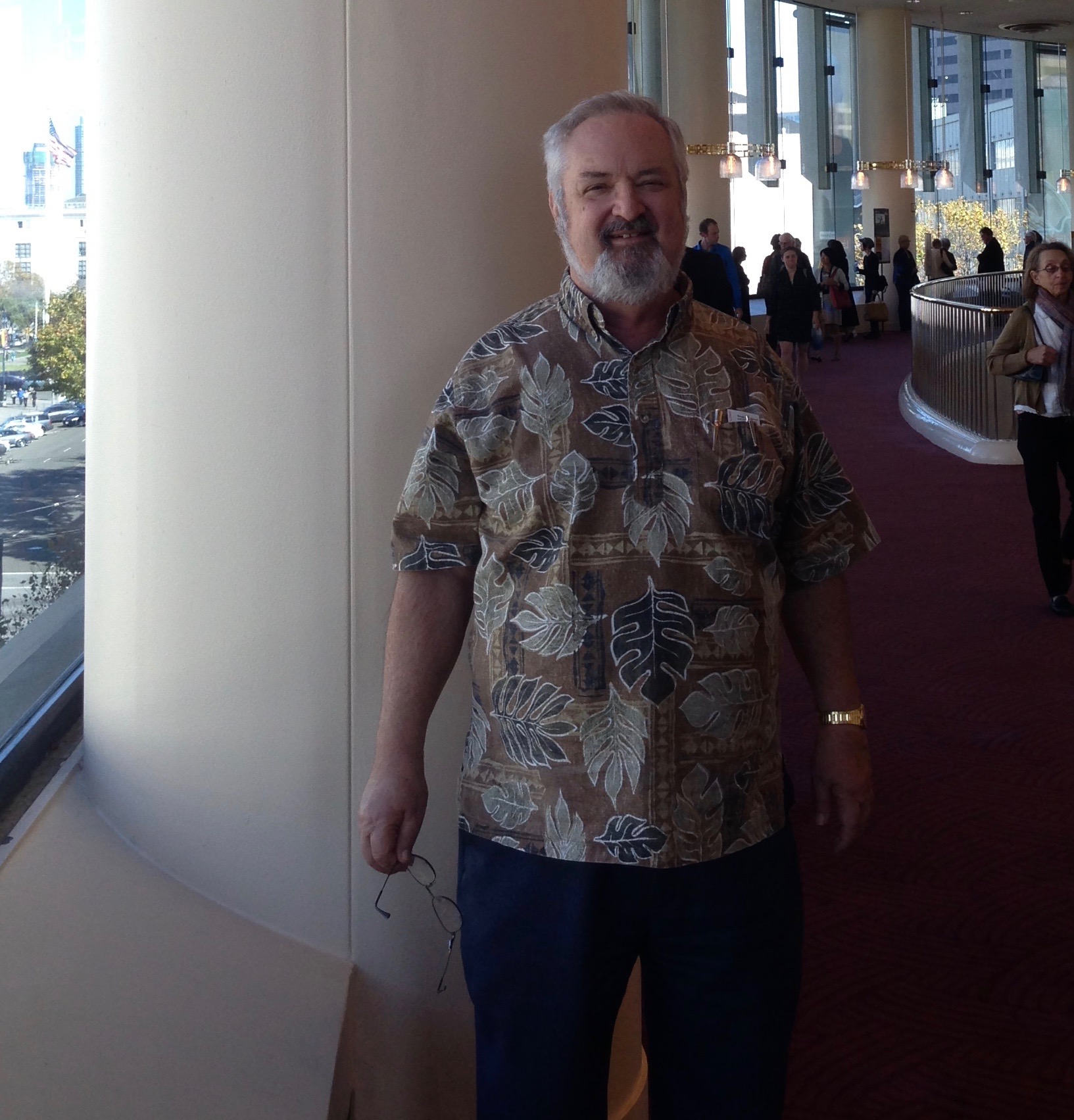 Let’s have at least a few more concerts that present only the music — the magic! — of the old masters. You never know … more programming like this might actually attract a larger audience.

* Some of these ideas were in an op-ed I wrote that was published in the Jan. 13, 2011, Honolulu Star-Advertiser. This is one of only two op-eds I’ve written that were published in my own name. All the others — on a wide range of subjects — have been ghost written for clients. (The other op-ed under my byline appeared in the Honolulu Advertiser on Oct. 31, 2000.)