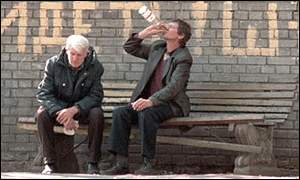 In my junior year of high school, our history teacher began the year’s first lesson by telling us that “America is a hard-drinking nation.” We may well be, but in my experience, Americans don’t hold a candle to the Russians. I’ll come back to tales of Russian drinking prowess in a future post, but today I’ll share just my first exposure to the phenomenon.

It was in the summer of 1967, and I’d just arrived in Leningrad (today’s St. Petersburg) for a six-week course at the Leningrad State University (LGU) “Faculty of Russian Language for Foreigners.” I was with an entire planeload of young Americans – a mixed group of university undergrads and graduate students – who, like me, were eager to strengthen their fluency in this somewhat challenging language.1

For six weeks we attended classes in the morning and were kept busy with a variety of excursions and social and cultural programs in the afternoon and evening. But we also had plenty of free time to explore the city on our own.

We hadn’t been there a week when my new friend George and I decided that after dinner we’d get on the Metro – the city’s impressive subway system – ride it to the end of the line, and then take a walk around the neighborhood farthest from the university that we could easily get to. We had no idea what to expect.

Since it was June, and because Leningrad is situated on the 60th parallel2 – as far north as Anchorage, Oslo, Stockholm and Helsinki – it simply didn’t get dark at night. The sun would set at around 10:30 p.m. and rise again at about 3 a.m., and in between the sky dimmed only to the level of dusk. You could read a book outdoors at all hours. Of course, this was the other side of the seasonal coin – Leningrad winters feature long, dark, icy nights – so the locals take advantage of the summer’s “White Nights” and stay out late.

The most distant Metro stop in those days was at Park Pobedy – Victory Park, commemorating the USSR’s defeat of Nazi Germany in World War II. When George and I emerged from the long escalator that took us back up to ground level,3 we found ourselves in a large park with hundreds of people strolling, chatting, playing chess and generally enjoying themselves.

We walked up to a small knot of people who were watching a game of some kind. We soon began talking with one of them, a slightly tipsy guy, Slavik, who seemed interested to learn he was speaking with a couple of Americans. He told us the game was called gorodki, which translates as “little towns,” which Wikipedia cleverly describes as a cross between bowling and horseshoes.

After a few minutes, Slavik suggested we go get a drink. That sounded interesting, but neither George nor I had any idea where to find a bar. We needn’t have worried. In the Soviet Union there were no bars other than in government-run Intourist hotels that catered exclusively to foreigners and were therefore no-go zones for ordinary Russians. But Slavik, like millions of his thirsty compatriots, knew what to do. He took us to a neighborhood grocery store where we bought a half-liter bottle of “the white stuff” and a little bag of small chewy chocolates – Soviet Tootsie Rolls.

We then repaired to the backyard of some nearby apartment buildings, seated ourselves on a bench near a small children’s play area and opened the bottle. Like a good host, Slavik handed it to me and said something about how George and I should each take a good swig so as to share the bottle evenly. Little did I imagine exactly what he had in mind.

I went first. I tilted my head back, swallowed a bit … and choked. George did the same. Slavik handed us both chocolates since no well-mannered Russian drinks without having a “bite” of some sort after each drink.4

I was beginning to feel unhappy at the prospect of having to sit around for half an hour or more nipping at the bottle when to my utter amazement Slavik tilted his head back and drained it. It was still almost full, and the vodka went gurgling down his gullet for about 10 uninterrupted seconds. An hour later, we left him, still sitting on the bench, in a stupor.

That was Round 1. Stay tuned for at least one additional tale of Russian drinking.

1. We came from colleges all around the country. Although I’d studied Russian four years while a Yale undergraduate and had then just completed the first year of a two-year Soviet area studies master’s program at Harvard, I was in Leningrad as part of a relatively small group organized by Dartmouth College. Other groups in that summer’s program came from half a dozen other universities around the country.

3. The Leningrad Metro is one of the world’s deepest, which necessitates long escalators. The deepest station is 282 feet (86 meters) underground, and the average length of the system’s escalators is more than 425 feet (130 meters). The Metro’s great depth results, in part, from its Cold War-era builders’ desire for the stations to also serve as air raid shelters and, in part, from geological considerations, since the city above is situated on marshy river delta terrain, with bedrock located deep below.

4. I’ve since learned that eating a bite of something solid right after a shot of hard liquor is a great idea. Chewing and swallowing something helps clear the mouth and nasal passages of the alcohol “fumes” that are a good portion of what makes spirits feel so potent.

A Rose by Any Other Name … Well, Maybe Not ANY Other Name!
Scroll to top