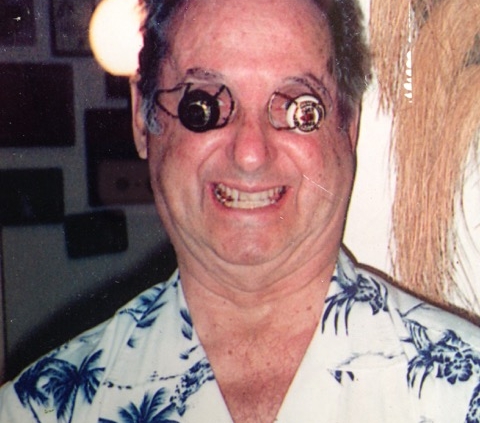 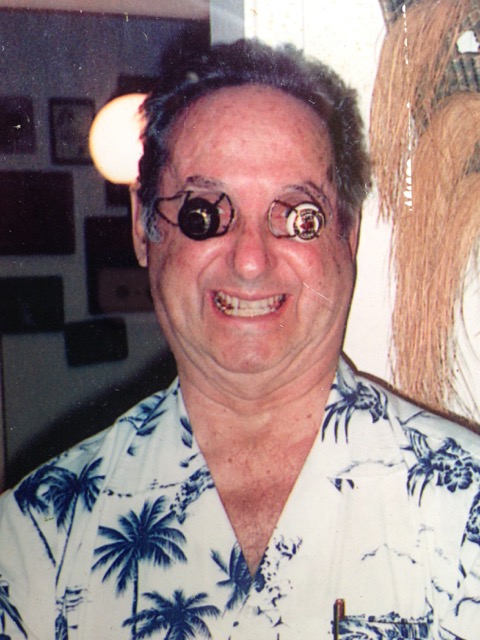 Nat Daniel, at 80+ years, clowning around with champagne cork cages at a birthday party

If my dad were still alive, he’d be marking his 107th birthday tomorrow (he was born on Sept. 23, 1912). Nat Daniel was a smart, innovative guy.  He was also very funny. So I’ll celebrate on his behalf by regaling readers with a little practical joke he played on me back in the early 1980s (I no longer recall the year).

The incident took place not too long after he patented his idea for a fast, inexpensive, smooth-riding oceangoing vessel, the SuperOutrigger. Dad was looking to find financial backing for his invention, and he’d learned about what I’ll call an invention convention in New York City — a trade show featuring exhibits of several hundred recent inventions in search of commercial backing. Perhaps he’d find someone there who would share his appreciation of the SuperOutrigger’s enormous potential.

Dad recruited me as his sidekick for the event. I was living and working in Washington, D.C., at the time — I’d returned home a few years earlier from my overseas assignment in Leningrad and was then serving as “desk officer” for the U.S. Information Agency’s programs in five European countries.1 It was easy for me to take a few days of accumulated vacation time and join Dad in New York. 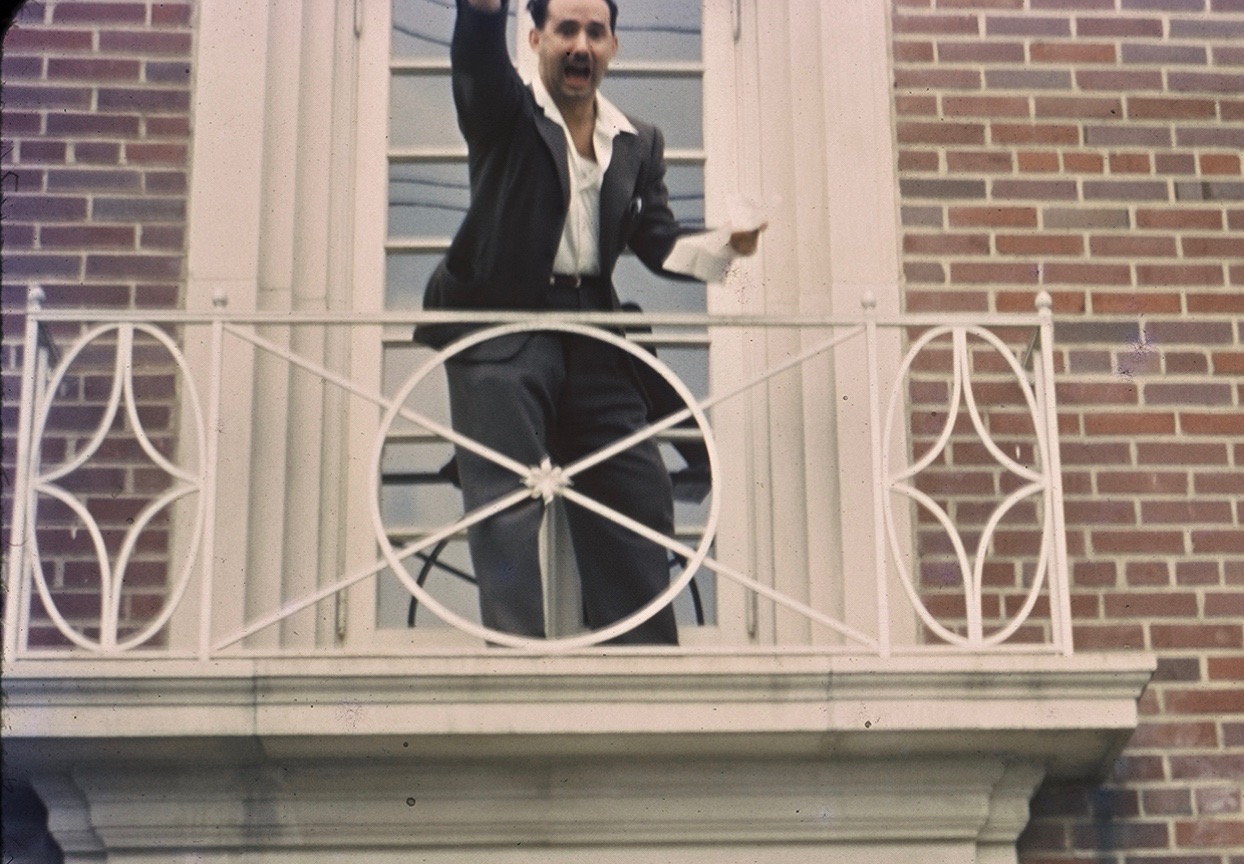 Early photographic evidence of Dad’s sense of humor — standing on a balcony in the early 1940s mocking Hitler and Mussolini. I can’t help but wonder if he was inspired by Charlie Chaplin’s portrayal of The Great Dictator, which came out in 1940. Or by Mussolini himself, who loved to harangue crowds from a balcony.

The convention/trade show was held in a midtown hotel. The exhibit booths (actually tables) were set up in a cavernous space on a lower floor. Since the convention was our sole reason for being in New York, we stayed at the same hotel, sharing a room on an upper floor. Every morning, before going to our exhibit space, we’d head downstairs for breakfast in the hotel’s coffee shop.

I should elaborate on what I wrote, just above, about our room being on an “upper floor.” This being Manhattan, an upper floor was not just a few stories above the lobby. As I recall, our room was over 40 floors up. So when we’d go down to the lobby for breakfast, the ride took several minutes, depending on how many stops the elevator made along the way.

One fine morning we got off to our usual early start, boarding the elevator at around 7 o’clock. Being on one of the hotel’s uppermost floors, we were the first two passengers as the elevator began its descent. 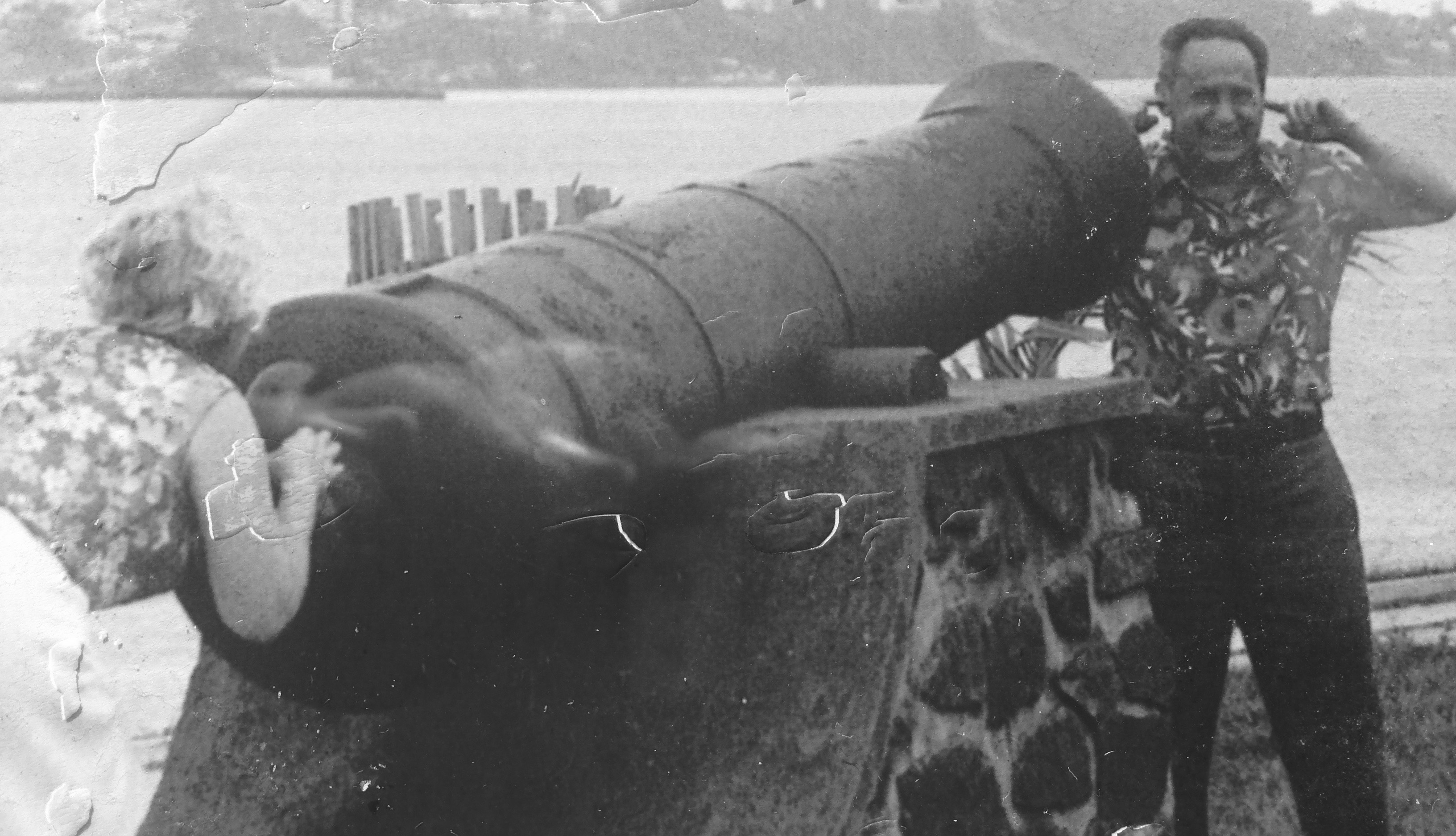 Sense of humor undiminished at around age 60 — here he’s mugging for the camera with my mom in 1973 while in Recife, at the northeastern tip of Brazil.

No sooner had the doors closed when Dad unburdened himself of a fart. Not a dainty little one, either. I could hardly believe it. Not that he would fart — everybody farts, and when in my company, Dad was not shy2 about emitting what Sandra and I sometimes call “green clouds.” What I could hardly believe was that he’d do it in the confined space of an elevator that would surely soon be stopping for more hotel guests on their way down to breakfast.

Just moments after I told him I thought his fart was not such a good idea — I phrased it a little less diplomatically — the elevator stopped to pick up a few more passengers. Dad didn’t miss a beat. He looked at me with a perfectly straight face and said, “Howard, I told you not to fart in the elevator.”

The brazenness took my breath away and left me speechless.

And I have to say that if he were somehow to come back and pull this stunt again, I think I would once more be at a loss for words.

Happy birthday, Dad! In the minds of those of us who knew you well, your immortality is assured. 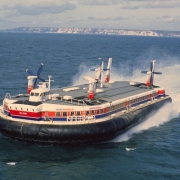 Beating a Cold the Hard Way

Déjà Vu All Over Again
Scroll to top