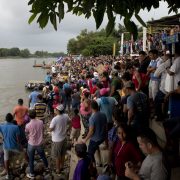 Honduran migrants I began writing this post two days ago after reading about the “caravan” of several thousand Honduran migrants that has been halted at Mexico’s southern border. If and when they are eventually allowed to cross into Mexico, it appears that most of them hope to keep heading north to the U.S. Presumably, most […]