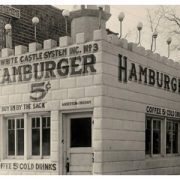 White Castle Last week, in writing about a couple of brushes I had with George H.W. Bush before he was president, I mentioned that while I was working at the U.S. Mission to the UN for a couple of months in the fall of 1971, I’d usually have lunch at one of mid-town Manhattan’s many […]

The death, several days ago, of George H.W. Bush, brings to mind a couple of brushes I had with the man who would later serve as the 41st president of the United States. The first of these “brushes,” in 1971, was entirely impersonal. He and I were both serving at the U.S. Mission to the […]