The following incident took place one evening in 1972 in our apartment, when I was working in my first Foreign Service post at the U.S. embassy in Brasilia.

My wife (clarification: my “starter wife,” as a funny friend likes to call a first spouse to whom one is no longer wed) had gone to bed a few minutes earlier, and I was getting ready to turn off the light and join her when I spotted an enormous fly sitting high on the wall, just where it met the ceiling. I felt compelled to kill it, since I was certain that at first light, like most flies, it would begin buzzing noisily around the room.

I didn’t want to swat it, however. Its location meant that whatever I tried to hit it with would probably graze the ceiling and allow the monster to escape. Most critically, the sound of a swat would surely startle my wife, who was already dozing off. The beast had to be dispatched silently.

So I went for the Raid, reached up, aimed carefully and hit the button.

The fly instantaneously launched into a loud nose-dive …
and buzzed unerringly into my wife’s left ear.

I burst out laughing …
turning her shock into fury.

She swore I’d somehow, as if I’d filed a flight plan, made the creature target her. My laughter overwhelmed – and seemed to contradict – my fruitless protestations of innocence.

My kids inform me that their mother tells this story differently. But this is the unvarnished truth, as witnessed by the only person on the planet to have seen the entire event. 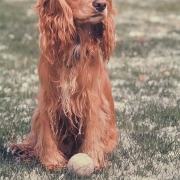