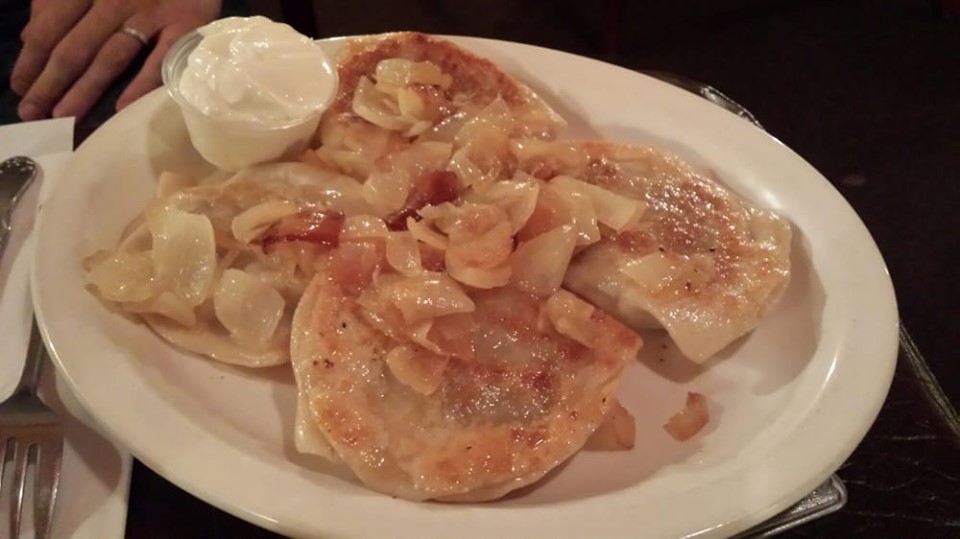 On Thursday evening (Aug. 8), Sandra and I celebrated our 32nd anniversary* at one of our favorite restaurants, Tisza Bistro, just two miles from our home. Yesterday, after getting a request to comment on our dining experience, I wrote a glowing review. I’m supplying a link to it here because I want to demonstrate to any readers made skeptical by some of what follows that I actually am capable of writing something nice.**

Thoughts about restaurants I’ve visited lately were triggered by my initial idea for today’s post. I was going to write about some experiences on our July trip to western Pennsylvania and upstate New York. That post will have to wait because my thinking quickly shifted to three restaurants, among the many at which Sandra and I dined on our vacation, that stand out in my mind.

The first of these, whose name I will not supply here out of a desire to avoid offending the not-so-innocent, was a place we stopped for lunch as we drove from the Pittsburgh area to Niagara Falls. What made this eatery memorable was not only some of the food, but the slightly amusing names we found among the menu items, for instance an appetizer called “Some PIG!” — crispy fried pork belly tossed with chili sauce over Asian slaw.

Curiosity got the better of my common sense when it came time to order. Remembering Sandra’s sad tales of bologna soup from her days as a penniless student, I could not resist the temptation to check out the Fried Bologna Sandwich — “sliced bologna with a fried egg and American cheese on our house-made bun.” Let’s just say it was not as good as it sounds.

Sandra, bless her, was alert enough to note down a couple of my comments on the experience: “This is a hole in the wall — a little more hole than wall.” And “Highly undistinguished.”

On our way back to the airport at the end of our trip, we stopped at another restaurant in a small western Pennsylvania town, where we optimistically began the meal with lobster bisque, the soup du jour. My comment, which Sandra recorded in anticipation of my someday writing a post like this: “They made that lobster crawl here all the way from Maine!”

At a table across the room, a group of elderly diners elicited this less-than-generous thought from me: “Looks like the monthly luncheon of the Dentures ’n’ Depends Club.” (This is an inexcusable example of the pot calling the kettle black as I am just two days away from my own 75th birthday!) Further investigation shows I was not entirely alone in reaching this uncharitable conclusion — a two-star review by another diner reads: “My coffee came in a mug from a nursing home which didn’t exactly add to my enjoyment, but from the look of some of their customers they may well have been refugees from that nursing home.”

We had a different sort of culinary experience in Niagara Falls, N.Y. One evening we “took a walk on the wild side” and checked out a restaurant whose offerings included a well-known Polish specialty, pierogi. Now, I’ve never been in Poland, so I can’t be sure what authentic pierogi are like. I have, however, enjoyed their Russian cousin, pirozhki, which can be made in several ways, e.g., baking, deep-fat frying. The pierogi on offer in our Niagara Falls eatery seemed to have been boiled, were filled with sauerkraut, and came with a dollop of sour cream. Very traditional and, to my taste, although a little greasy, pretty satisfying (much like pirozhki with my favorite filling, cooked cabbage).

Adding to the memorability of the experience was our waitress, who fit the stereotypical spry, wiry look of one who has been in the business for more years than you can count. Many veteran servers are sweet and like to call you “Darlin’.” Not this one. She was tough as leather and all-business, verging on curt. She reminded me of a comment I read years ago in a collection of “outtakes” from Zagat restaurant reviews: “Waitresses trained by Joseph Stalin.”

This, finally, leads me to conclude with some of the choicest gems that Zagat put online (they’ve since been taken down, but I found them so funny — if, often, politically incorrect — that I saved them):

They put the salmon in salmonella.

Could have changed my oil two times from the bottom of the pasta dish.

The roaches always get the best seats.

The average age here is deceased.

Suffers from delusions of adequacy.

Took a doggie bag home; the dog refused it.

Waiters just back from the Jihad.

If I say anything bad about the place, I might get whacked.

Be sure to sit in the no-shooting section.

The only thing authentic about this joint is the heartburn and the check.

Wins for most roach sightings.

Should be renamed Barfing Dog.

The immature eating the inedible.

Chef’s responsibility is to turn on the microwave.

I can defrost better.

If I want a fatty sandwich served by a walking attitude, I’ll go to Mom’s.

To call it a dump would be flattering.

The cockroaches are more energetic than the management.

Perfect for your fasting day.

Where you can eat the cast of “Bambi.”

Have yet to learn that heat is an integral part of the cooking process.

Saves fuel bills — the heartburn will keep you warm all winter.

Duck must have had a long flight — tired, tough and took 90 minutes to arrive.

Food is icky, tables are sticky, waitress has a hickey, stay home if you’re picky.

** Here’s a link to several other favorable reviews I’ve written.

What I Did on My Summer Vacation, Part One
Scroll to top