The gently arched Hermitage Bridge carrying the Neva River Embankment roadway across the mouth of the Zimnaya Kanavka. In the background, the pedestrian bridge linking the Hermitage Museum (right) to the Hermitage Theater.

A few days ago something — I’ve already forgotten what — reminded me of one of the small pleasures of life I used to enjoy when Naomi and Adam, our two oldest kids, were little. From 1976 to 1978 we lived in Leningrad (today, once again St. Petersburg, the city’s original name). A Foreign Service officer, I was working at the U.S. Consulate-General there, several miles from our apartment.

Adam and Naomi at home in our Leningrad apartment, circa 1977

For much of the way to and from work, my route would take me along the embankment of the main branch of the Neva River, on whose delta the city is situated. I’d drive along the embankment not only every weekday morning and evening, but also at other times when I had something to do on the other side of town. On many of these other occasions, I’d be with the kids and their mother, my first wife, Martha.

For all of us, especially the kids, the highlight of these drives along the embankment was crossing the little Hermitage Bridge — barely 50 feet long, I’d guess — that carries the road across the Winter Canal (Zimnaya Kanavka/Зимная канавка, the word kanavka being a diminutive for canal). This narrow waterway separates the main portion of the world-famous Hermitage Museum from the building housing the Hermitage Theater. (As you can see from the top photo, the buildings are linked at their second stories by another bridge, just behind and above the roadway, which allows visitors to walk between them, inside, warm and dry.)

Why was this tiny bridge the highlight of our drives along the embankment? It was the gently arched construction of the span that made it such fun. As we’d cross the arch, typically at 30-35 miles an hour, we’d experience a sensation of partial weightlessness, “leaving our stomachs behind,” as we passed over the crest — a gentle version of what you feel as a roller coaster finishes its climb and starts to plunge.

I called this feeling “tickle your tummy,” and the kids looked forward to it every time we drove along the river. 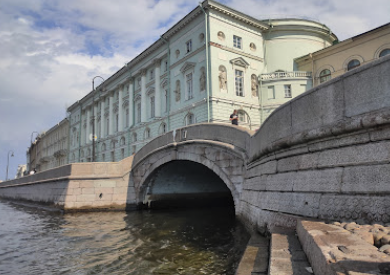 San Francisco may have the Golden Gate and New York the George Washington Bridge, but St. Petersburg has the Tummy Tickler Bridge, and I’ll never forget it.

It’s good to recall this happy memory at a time when it can be hard to avoid associating Russia with the unspeakable horrors its government and armed forces have been inflicting on the innocent men, women and children of Ukraine. I hope that people here in the West won’t succumb to the temptation to view everything Russian as being as vile and brutal as its president and his military (and the significant portion of its population that is reported to be taken in by Putin’s outrageous propaganda). Surely the nation that has given the world the music of Tchaikovsky, the literature of Pushkin, Tolstoy, Dostoevsky and Solzhenitsyn, and the Kirov and Bolshoi ballet companies will emerge from these dark days and resume its place in the civilized world.