The Donald and Il Duce: A more than passing resemblance?

Hearing the name of Donald Trump, the blowhard candidate, makes me think of a Yiddish word, trumpenik, that my grandfather would use from time to time about someone he regarded as a lowlife.

I looked it up online and found this (http://bit.ly/1pvJWXB) in connection with the word trombenik, a reasonable alternative spelling of what I recall hearing as trumpenik:

“All my [Bert Stratton’s] Yiddish dictionaries say ‘trombenik’ means ‘lazy person, ne’er-do-well.’ But Leo Rosten and Arthur Naiman add the meaning ‘boastful loudmouth,’ and say the word is derived from the Polish for a ‘blower of a horn or trumpet.’ ”

As applied to The Donald, “boastful loudmouth” sounds about right, although pretty mild. When I see snippets of him on TV, his facial expression often reminds me of newsreel footage of a smug Benito Mussolini on the balcony during a harangue to the crowd below (www.youtube.com/watch?v=uPWNwtDsrQo; starting at about the 1:45-minute mark). 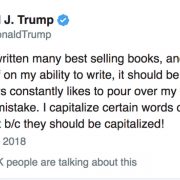 The Liberation of Rome
0 replies

‘One of the Cowboy States’
Scroll to top