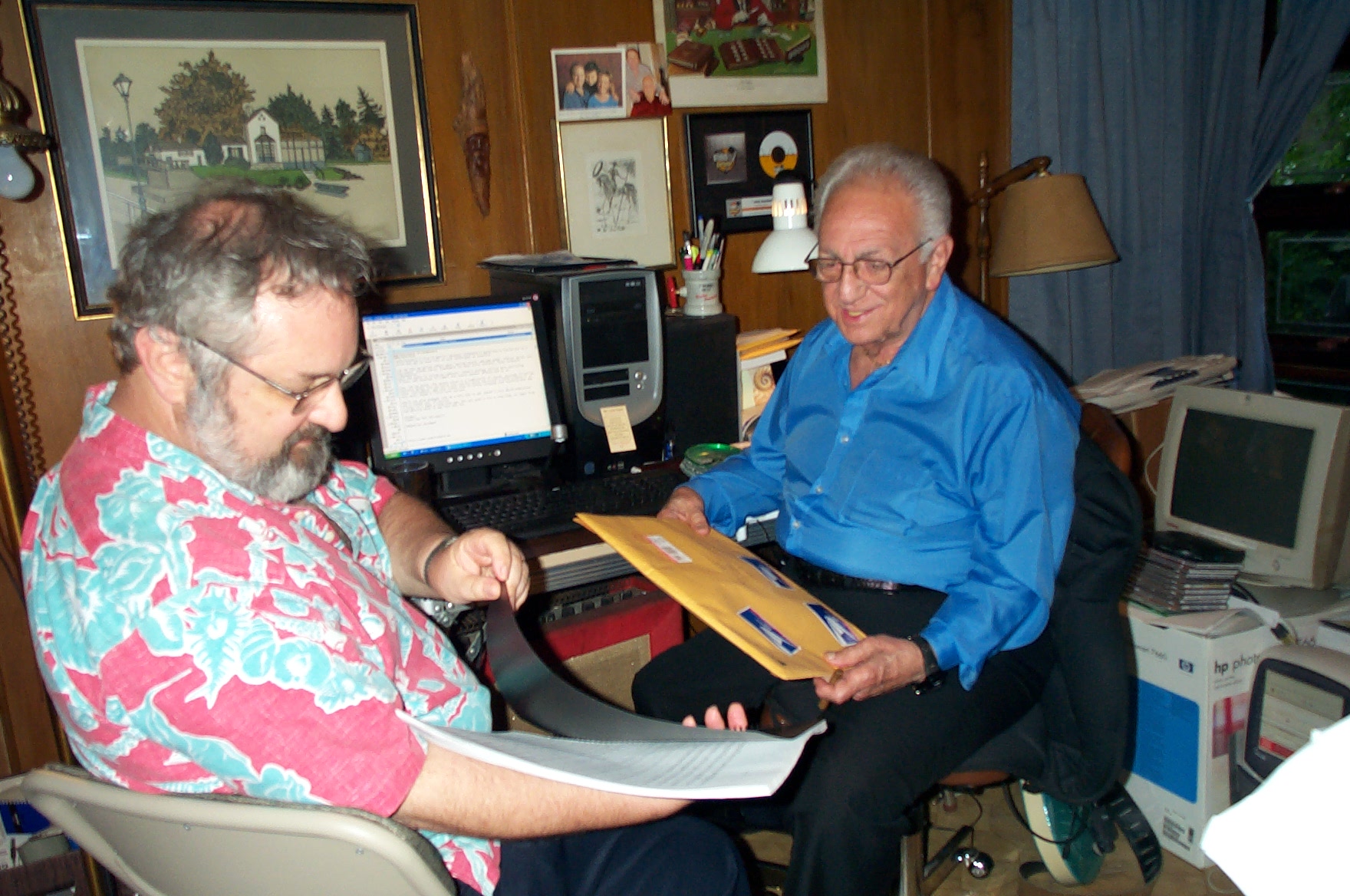 Vinnie and Howard, at Vinnie’s house, a “few” years ago

A guitar immortal succumbed to human mortality this week, but his music will long outlive him. Legendary studio guitarist Vinnie Bell (Vincent Gambella) passed away on Thursday, but left us an unsurpassed legacy in scores of hit songs, movie soundtracks and even advertising jingles in which his incomparable guitar and electric sitar sound played a vibrant role.

Vinnie was my friend. More important, he was a friend not just to me, but to my dad, Danelectro founder Nathan I. Daniel. Vinnie’s friendship with Dad spanned half or more of both their lives. On many occasions, Vinnie told me he regarded Dad as “a second father.”

Their friendship was born in a long, fruitful collaboration that began when they met at the NAMM (National Association of Music Merchants) show in 1958, when Dad was in his mid 40s, with Vinnie over two decades his junior. Vinnie’s phenomenal talent and energy transcended music and overflowed into ideas about instruments and their sounds. Innovative and curious, he was also highly skilled at building and repairing guitars — as would be clear to anyone who, like me, has seen his basement workshop.

In Dad, Vinnie found an innovator who was interested in some of his ideas and who invited Vinnie to visit the Danelectro factory regularly to discuss and try out some of those ideas. As a high school and college student who worked summers at the factory from 1958 to the mid-1960s, I witnessed some of this.

My fond memories include jamming a practical jokester’s “made-for-your-tailpipe whistle” in the exhaust of Vinnie’s white Cadillac convertible (with Dad’s connivance!) and watching the bewilderment on Vinnie’s face as he hit the ignition and prepared to drive home from the factory late one summer afternoon.

Once, when I was still in high school, Vinnie invited me and my date to drop in on a recording session in a New York studio. It was a real treat that wowed us both. He’d sometimes invite Dad and me to dinner at his home, and since Dad’s death, Sandra and I visited Vinnie several times at his home while on trips to the East Coast.

Dad prepared me for culture shock the first time I accompanied him to Vinnie’s house. Dad explained that Vinnie and his first wife Marilyn (who, sadly, passed away in 2005 after 52 years of marriage) were real old-school people from Italian immigrant families. Marilyn would cook and serve Vinnie and his guests, but not eat with them in the dining room. She’d eat later, or in the kitchen. She served mounds of delicious food — I’d be getting full after the soup and pasta, but several more courses were yet to come.

One of the coolest Vinnie experiences in my memory is from the time he was demonstrating Danelectro guitars and amps at the annual NAMM convention. The show was usually in Chicago, but once every four years it would be held in New York City. One of these New York shows took place while I was doing summer work at Danelectro early in my college years. I accompanied Dad and Vinnie to the show and greatly enjoyed Vinnie’s music. I still remember his arrangement of Caravan and his incredibly deft fingering. I think he got tired of my repeatedly asking him to play it one more time.

One of Vinnie’s early collaborations with Dad was on the development of the 12-string electric guitar. It was inspired by the classic romantic comedy Never on Sunday (1960), whose sound track included a great deal of Greek music featuring the bouzouki, a six- or eight-stringed acoustic instrument (three or four sets of double strings) similar to, but pitched lower than, a mandolin. Any guitarist could play the instrument that Danelectro developed and manufactured without needing to learn the traditional bouzouki with its fewer strings and shorter, unfamiliar fingerboard. Because the inspiration for its development was Vinnie’s, they gave the body a bouzouki’s teardrop shape and called it the “Bellzouki.” But it was, in essence, a 12-string electric guitar, widely regarded as the world’s first such instrument.

Another of Dad’s collaborations with Vinnie produced the foot-pedal-operated device that gave Vinnie his signature “underwater” sound (clearly audible at the 1:50 mark on this YouTube link). The pedals, which Vinnie would take with him to his many studio recording sessions (he was perhaps the most in-demand studio guitarist in New York), were born from Vinnie’s experimenting with the electro-mechanical reverb system that Dad had invented, patented and incorporated in Danelectro amplifiers.

Dad’s reverb used crystals and circuitry to turn mechanical vibrations in long springs into electrical signals that could be modulated to produce varying degrees of reverberation — depending on how far up you turned the dial. While Dad developed the reverb effect to mimic the rich sound heard in a concert hall or large room, Vinnie discovered that if you daisy-chained multiple reverb units together, you could produce an “underwater” sound — something you’d never hear in a concert hall.

Together, Dad and Vinnie worked out how to produce this effect with a single device housed in a box topped with an array of pedals that enabled Vinnie to produce as much or as little of the “underwater” sound as he liked, controlling it with his feet while playing.

Dad never considered marketing the device. He built it exclusively for Vinnie, and Vinnie took that set of pedals with him to virtually every recording session, carefully guarding its secrets, never letting it out of his sight on studio dates and using it to great advantage in making himself the all-but-indispensable guitarist on gig after gig. Lacking the device, no other guitarist could imitate Vinnie’s sound.

Dad and Vinnie’s last major collaboration was the development of the electric sitar. The classic sitar, an acoustic instrument from India, differs so radically from a guitar in its construction that no guitarist could simply pick one up and play it. Dad and Vinnie worked together on the design of the electric sitar, which produced the sound of the traditional Indian instrument but which any guitarist could easily play without prior instruction. The secret to its distinctive sound is in the bridge, which is gently curved to produce the classic sitar’s buzz as the strings vibrate against it. The sitar effect is enhanced (in the deluxe model) by a set of “drone strings,” with their own pickup, that vibrate in sympathy with the strings being played.

Shared Legacy Eroded by Alzheimer’s
Unfortunately, in recent years, I’d been seeing growing evidence (on Vinnie’s website and in other writings) that the long and fruitful collaboration with Dad seemed to be fading in Vinnie’s memory. This was painful and concerning.

The problem underlying this concern became clear when I read an obituary posted online just a day after his death. Vinnie, it said, “had been suffering from the effects of Alzheimer’s Disease for several years.” Actually, Sandra and I had been deeply saddened to see evidence of this on our last visit with Vinnie and his second wife, Bonnie, at their home in Tenafly, N.J., in December 2014. Vinnie was far from his old self, and we strongly suspected he was struggling with Alzheimer’s.

What particularly shocked us on that visit was Vinnie’s taking sole credit for a couple of innovations on which I knew he’d collaborated closely with Dad: the foot-pedal device that gave Vinnie his “underwater” sound and the electric sitar.

In retrospect, the confirmation of Vinnie’s battle with Alzheimer’s explains the evidence I’d been seeing of his taking exclusive credit for these innovations. Clearly, this condition begins to kill people — eroding their minds — years before they pass away.

It pains me greatly to be writing this because I’ve known, loved and admired Vinnie for most of my life. But I love Dad too, and since he’s no longer here, I’m the only one with first-hand knowledge who can set the record straight.

The pedal device that gave Vinnie the “underwater” effect was not a solo innovation. Vinnie and Dad collaborated on its development, building on Dad’s patented reverb invention. The electric sitar was also a collaborative effort. Dad and Vinnie shared the patent, and Dad told me years later that, as a favor, he agreed that Vinnie’s name would be placed first on the patent application, something in which Vinnie took lifelong pride. But I’m sure Dad never imagined that, as Alzheimer’s affected his mind, Vinnie would take full credit for it.

Rest in peace, Vinnie. Play on, keep dreaming up wonderful new sounds, and when you meet Dad in the Great Beyond, may you enjoy reminiscing together about your good times and great accomplishments.