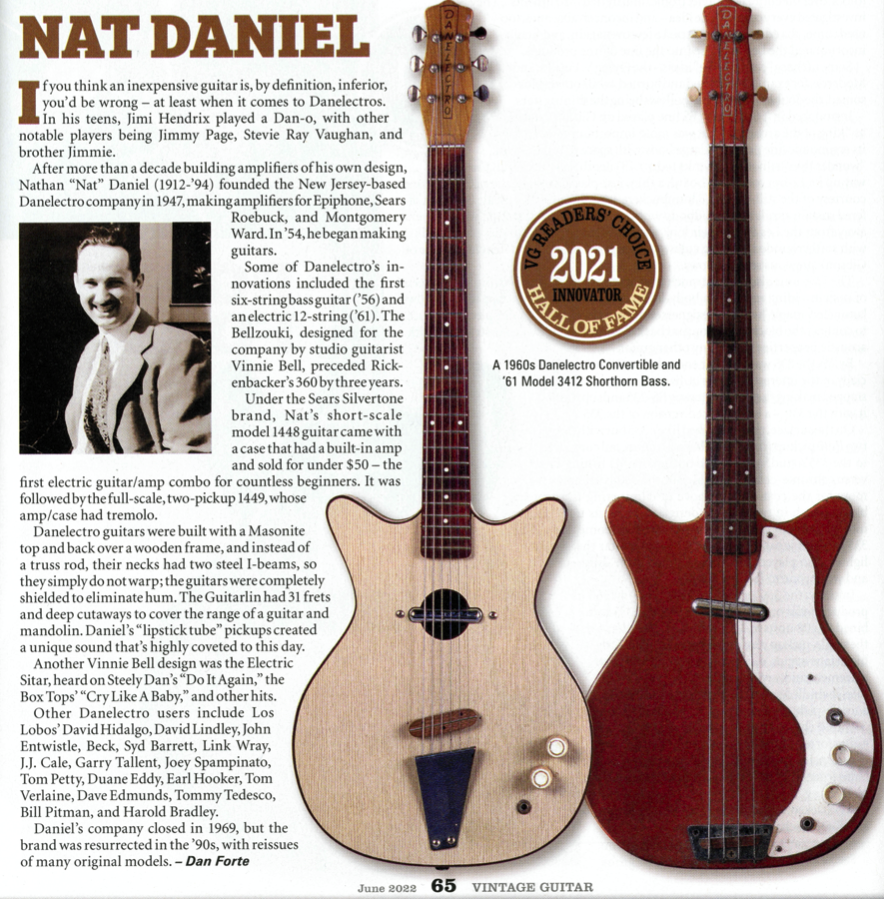 I’m celebrating! I just got word that my dad, electric guitar and amplifier pioneer Nathan I. Daniel, has been honored as 2021 Innovator of the Year in Vintage Guitar Magazine’s Hall of Fame.

A good friend — a highly knowledgeable admirer of my father’s innovative guitars and amps — sent me a shot of the write-up (above and below) in the magazine’s June 2022 issue (which has yet to be posted on the magazine’s website). Because the write-up is neither a comprehensive nor an accurate-in-every-detail summary of my dad’s innovations, if you’d like to know more about Nat Daniel’s many break-the-mold industry “firsts,” I hope you’ll also check out the tribute to him that I’ve written.

I want to thank the many friends, family members and probably hundreds (perhaps thousands?) of total strangers who played supporting roles in helping elevate my dad — an unassuming man who never sought fame — to this Hall of Fame pedestal. The Vintage Guitar honor is an annual “reader’s choice” award, in which the public is given an opportunity to anoint one of four finalists in each of quite a few categories.

So to each and every one who voted for Dad in this competition, a heartfelt thank you! And lest anyone think this was a “vote early, vote often” result, while voting was not limited to Vintage Guitar subscribers, even the most enthusiastic Danelectro fans were constrained by the one-person, one-vote, one-time rule.

This, by the way, is not yet the end of the Hall of Fame story. With the priceless help of several friends and “Dano” admirers, I’m also hoping to get Dad inducted into the really big one, the Rock and Roll Hall of Fame (Rock Hall) in Cleveland, where he truly deserves to be enshrined. While, for performers, Rock Hall induction is a popularity contest, the path to glory for “behind the scenes” figures in the industry is a bit more convoluted. Wish us luck and stay tuned.

Advance Man for the Grim Reaper? No, Thank You!
0 replies

A Marriage Made in … Michigan!
Scroll to top