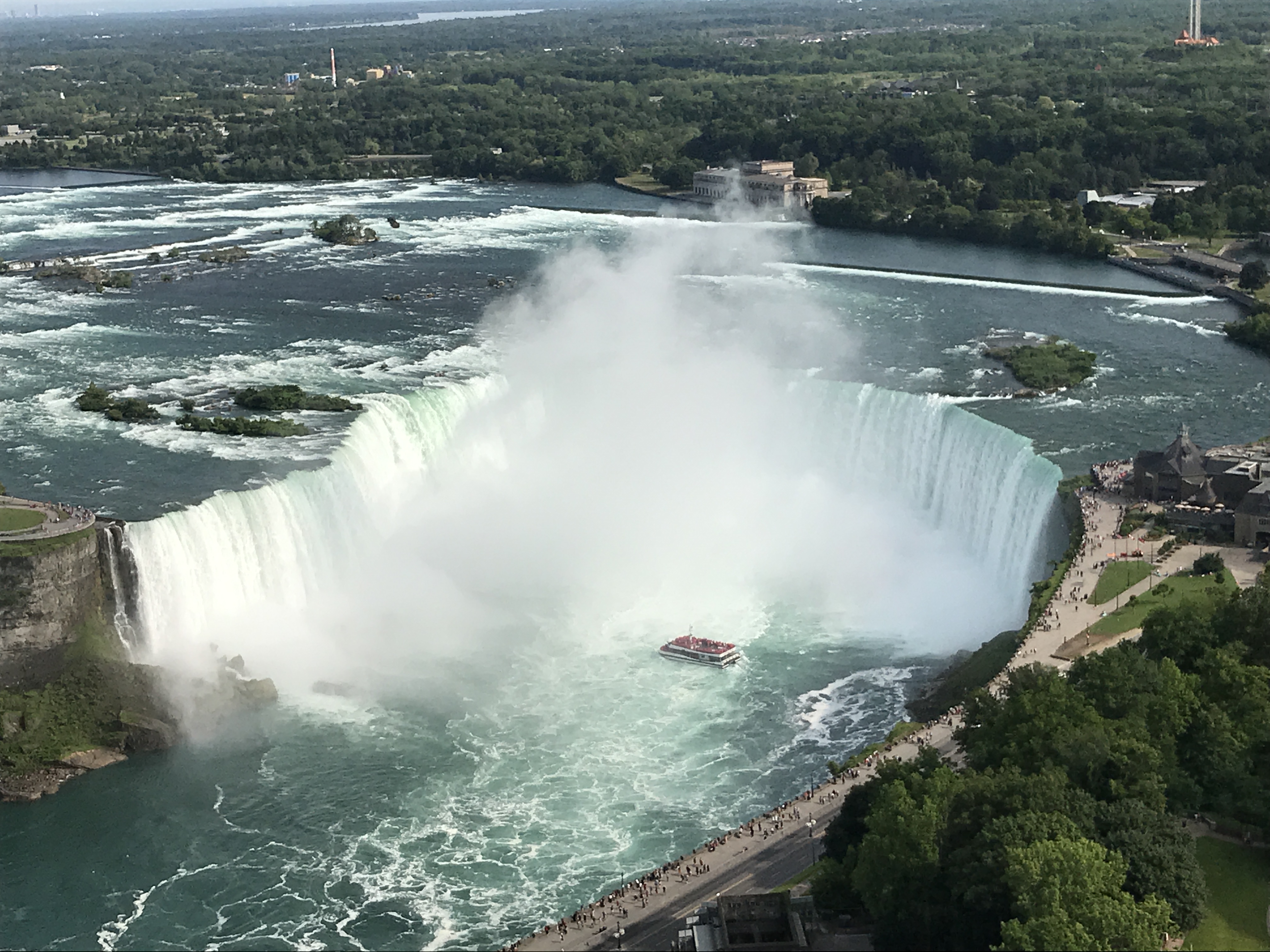 It’s back to the East Coast (well, almost — we didn’t get much past Lake Erie) this week, as I wind up this intermittent series on what Sandra and I did on our summer vacation.1

After an al fresco breakfast at the same shoreline restaurant in Erie, Pennsylvania, where we’d greatly enjoyed dinner the night before, we set out for Niagara Falls, again forsaking the Interstate in favor of the two-lane road that more closely hugged the Lake Erie shore and gave us a better feel for the area’s towns and countryside. 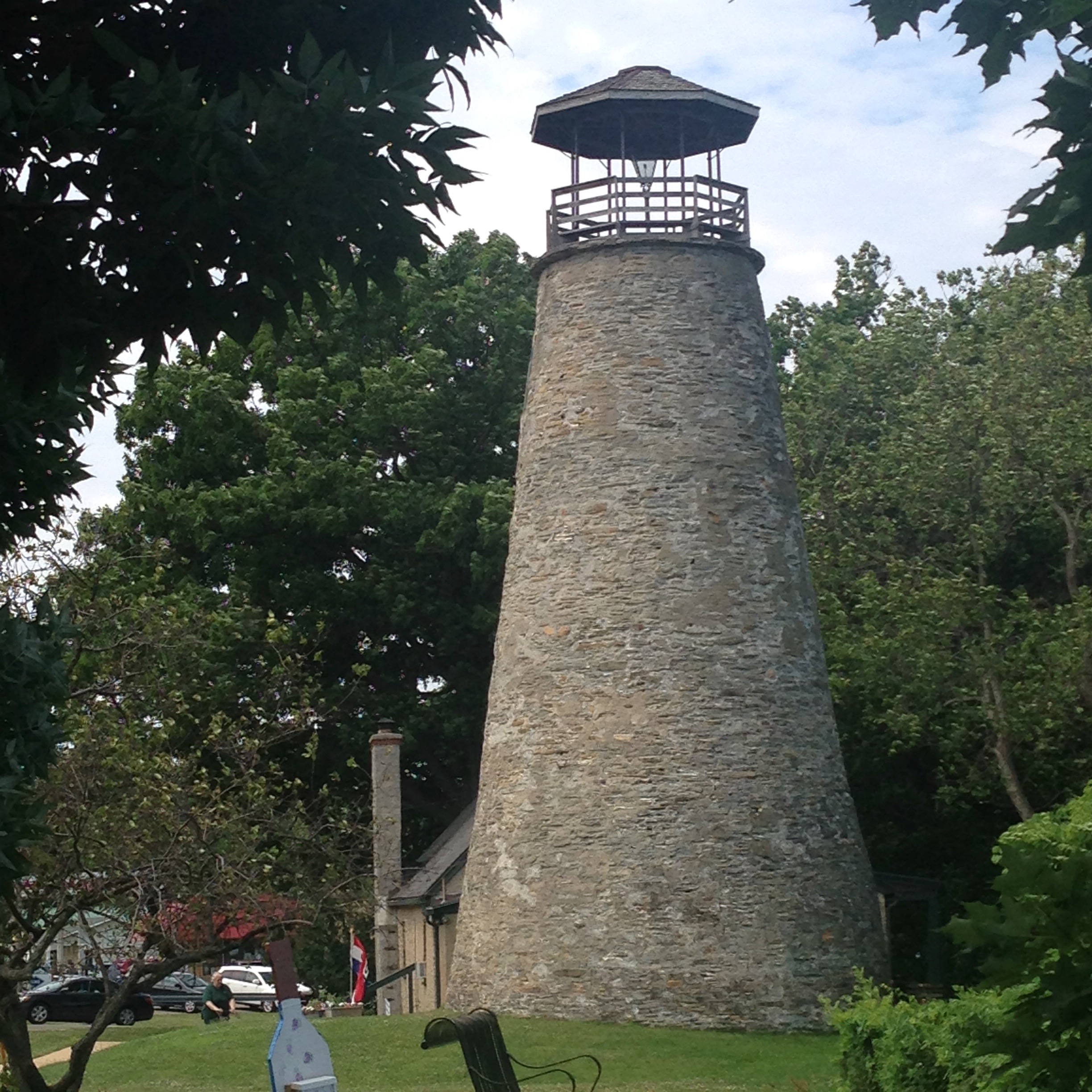 Our continuing byway-not-highway exploration of the area paid off shortly after we crossed into New York. In the hamlet of Barcelona, we spotted the most unusual lighthouse I’ve ever seen. Not only was it an esthetically pleasing, tapered cylinder built of stone, but it was the world’s first lighthouse whose flame was powered by the region’s abundant natural gas (a clue, perhaps, to the presence in the area of the petroleum that was first tapped into by Edwin Drake in Titusville, Pennsylvania, only 60 miles distant, three decades after the lighthouse was completed in 1829). 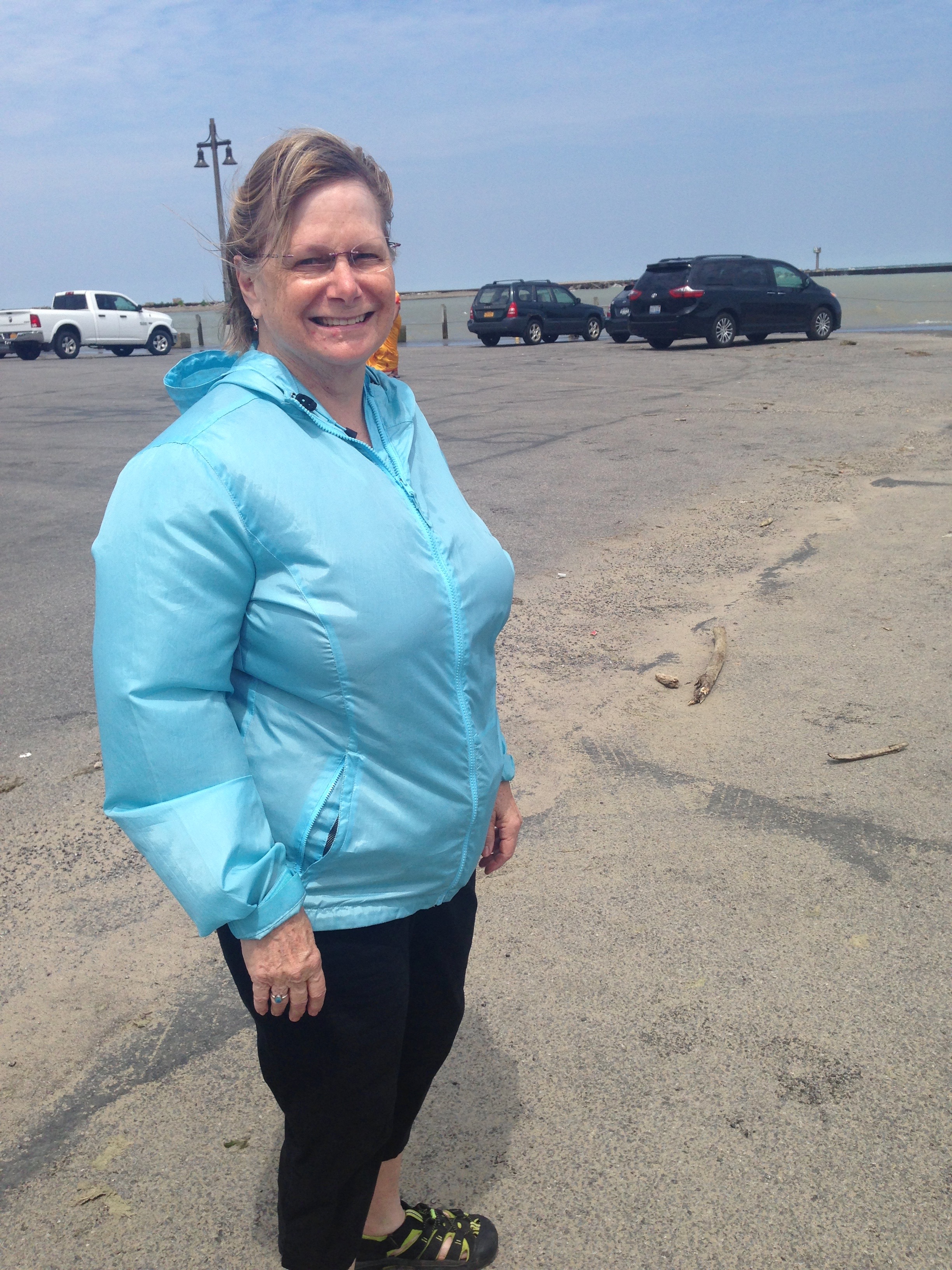 I like buxom women, but Sandra doesn’t require wind inflation.

Living as we do in California’s Wine Country, we found it interesting to see how much of the countryside was planted in grapevines. Their large leaves made clear that the predominant local variety (Concord) was different from the smaller-leaved ones we are accustomed to seeing at home. We didn’t stop for a tasting that day, but a few days later we took a side excursion from the Niagara Falls area and visited the Schultze winery, which we picked at random, where we sipped several different elixirs. We brought home a bottle of Niagara County Crackling Sweet Catawba — delightfully bubbly and not too sweet — which we will soon share with friends. At the winery, we were told of the local vineyards’ difficulty: the bulk of their production is purchased for grape juice, and while the price of supermarket grape juice has climbed along with everything else in your shopping basket, the biggest juice maker hasn’t raised the price it pays to growers for many years.

At Niagara Falls, we did what the whole horde of visitors does. We gawked. We walked. We got soaked. How? In all ways possible short of getting into a barrel and “going with the flow.” 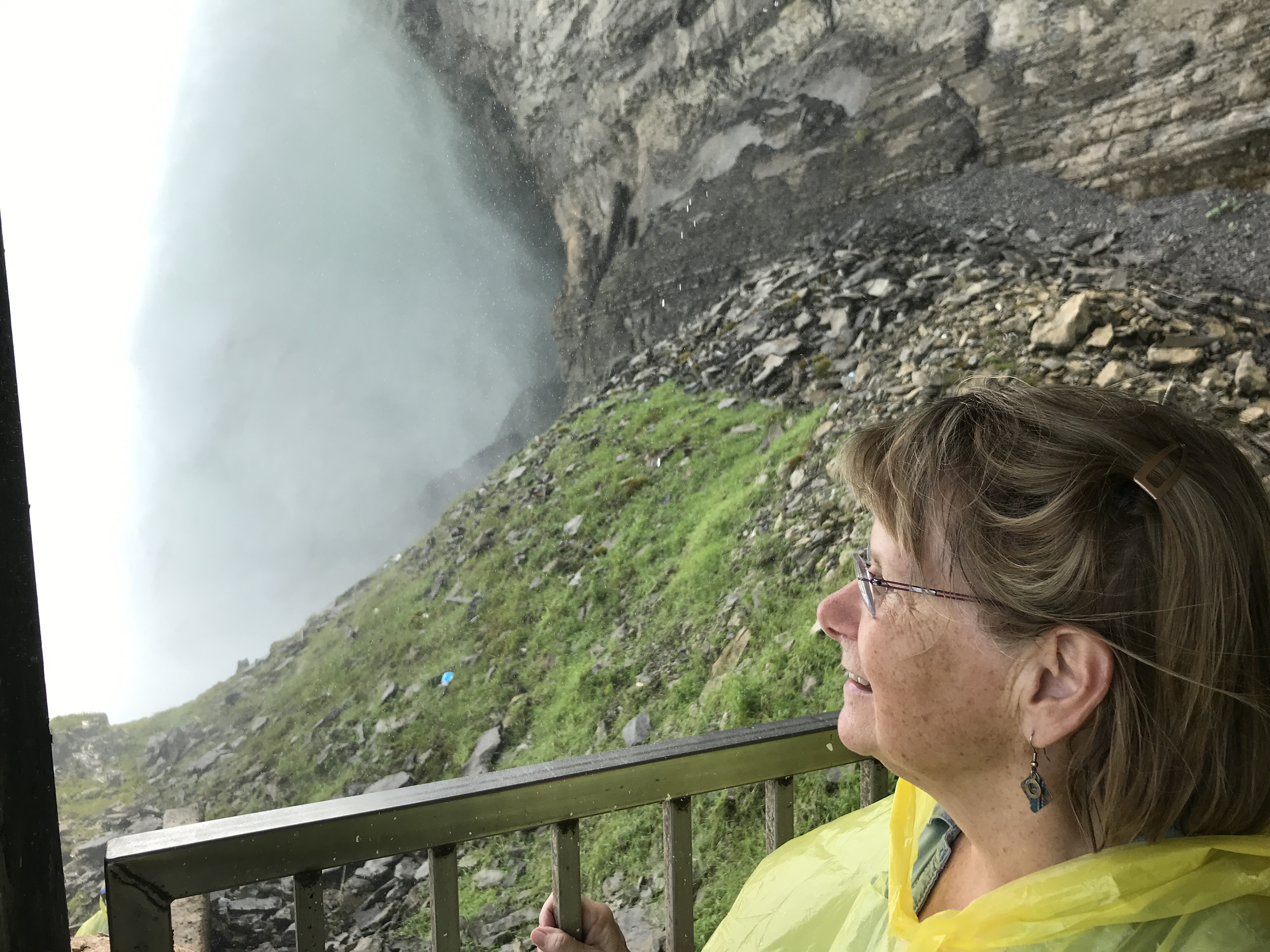 Just before we went into the tunnel behind the Falls, Sandra stopped to marvel at the water cascading over Niagara’s lip.

We escaped the worst of the horde by crossing the bridge to Canada, where the crowd was a little thinner. We began by going into the tunnel hewn into the rock behind the Horseshoe Falls. Side tunnels lead to openings that face the sheets of plunging water and billowing spray just a few feet from your face. Bright yellow ponchos come with the price of admission (a different kind of soaking — OK, just kidding; prices in this tourist mecca were not unreasonable). 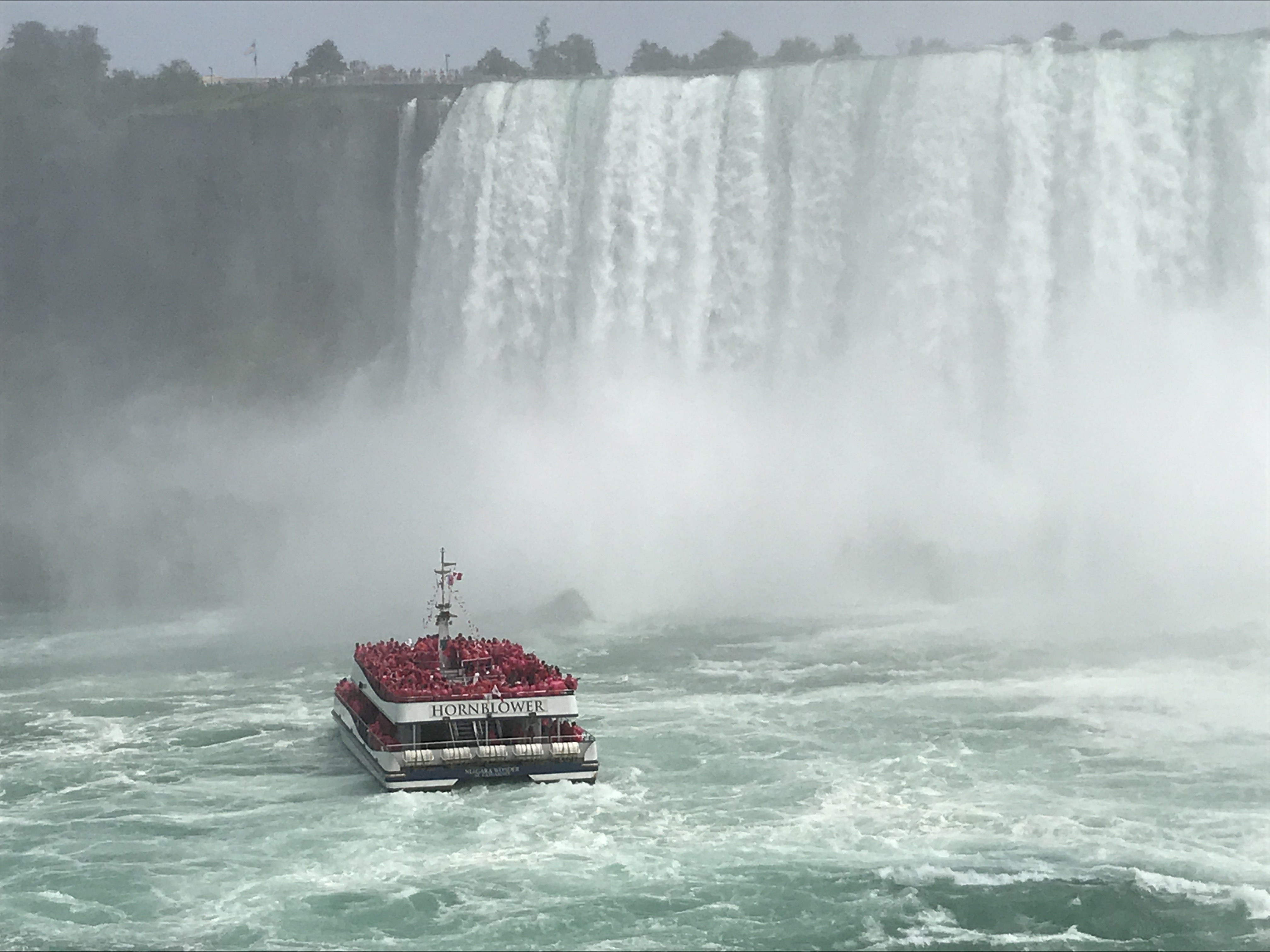 A short taxi ride away, we took an antique cable car over the swirling water downstream of the Falls. We then rode the funicular (“incline railway”) down into the Niagara Gorge, just below the Falls, donned pink ponchos and embarked on the Hornblower, the Canadian counterpart of the famous Maid of the Mist, for a voyage to the base of the falls and the day’s most vigorous soaking.

Maid of the Mist

We did all that in one day. But we still had a little more time to explore the area before driving back to Pittsburgh to catch our flight home. So we spent another day cruising the placid waters of the fabled Erie Canal. (Actually, the boat ride lasted only a couple of hours, but it took weeks for that song2 to stop playing in my head.) 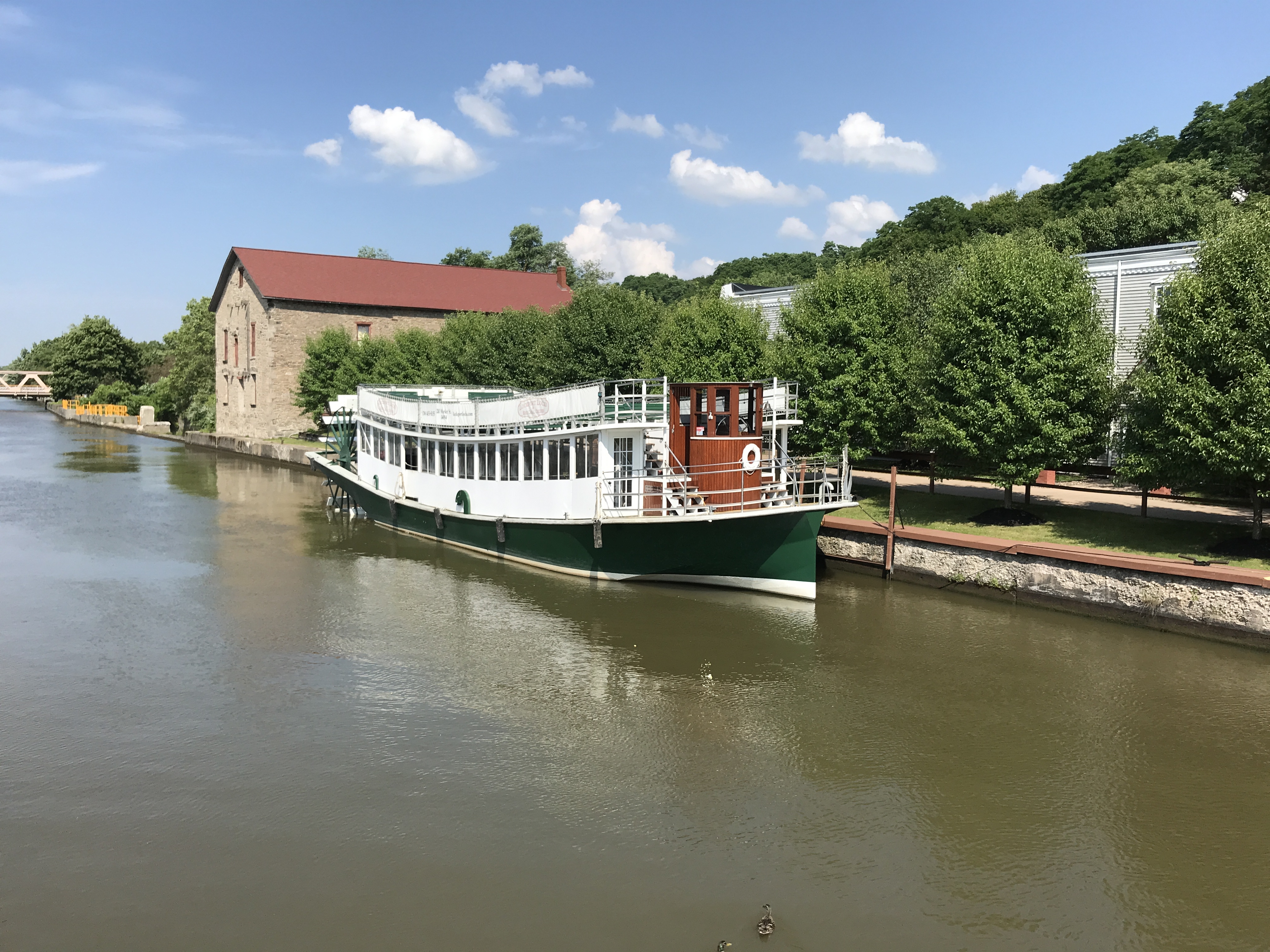 Another canal boat at our starting point 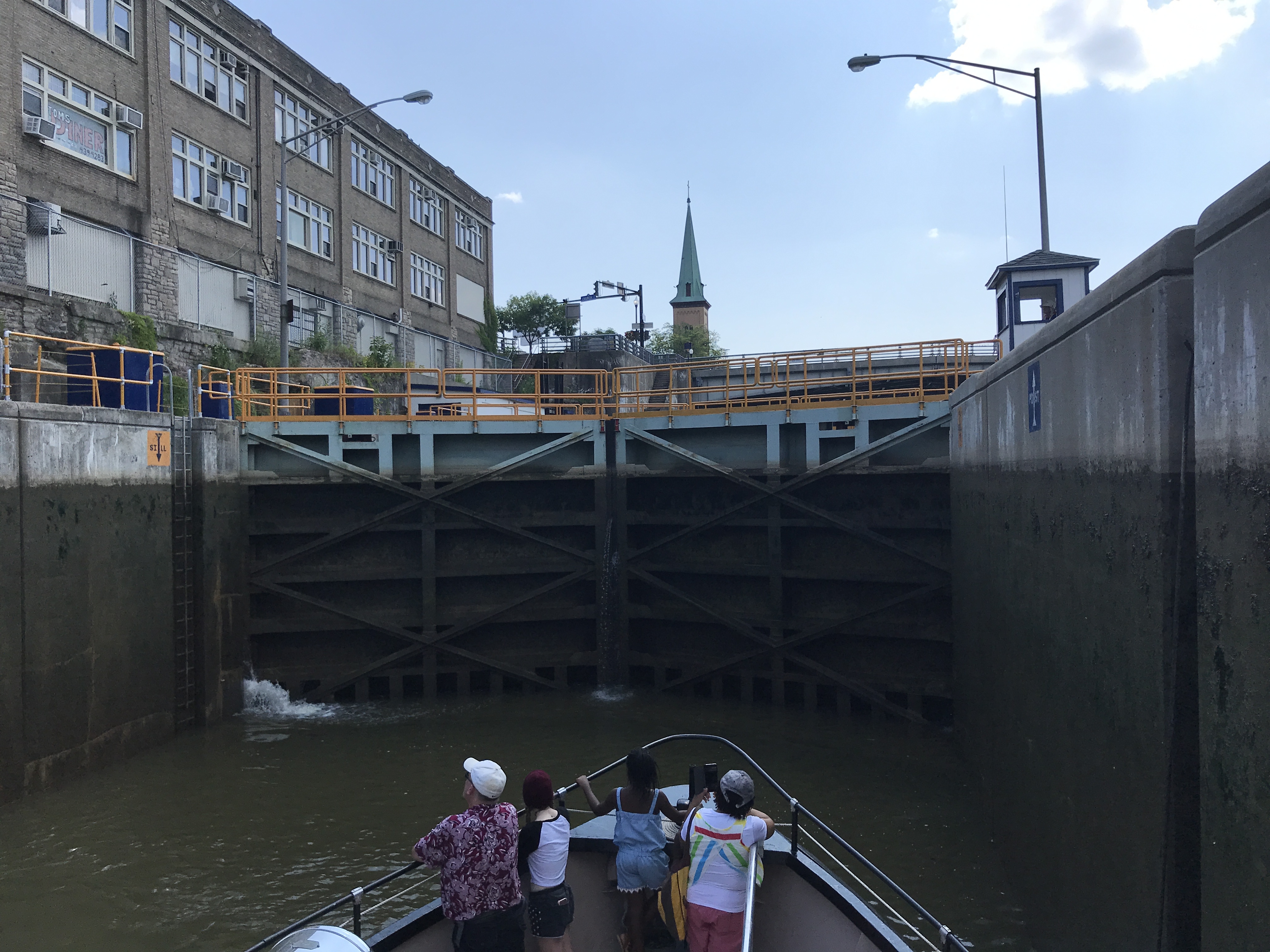 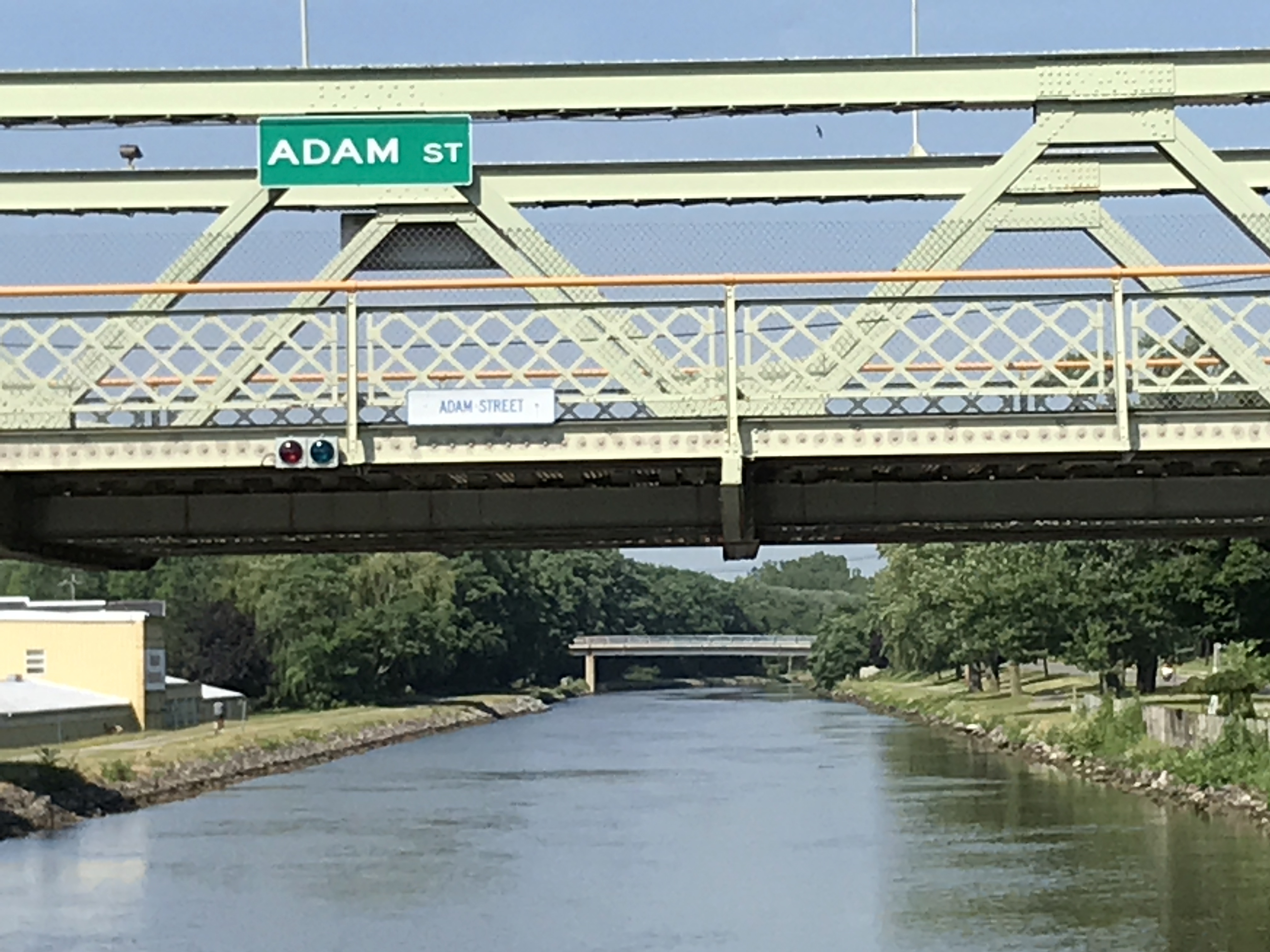 Passing under the Adam St. drawbridge, Lockport (Had to take this photo — one of our kids is Adam)

On our last full day in New York we drove east to the town of Corning where we visited the Corning Museum of Glass. If you’re ever in upstate New York, this world-class museum is easily worth a day. (Admission actually gets you a two-day pass, and it’s no stretch to see how you might enjoy a second day of filling your imagination with even more fabulous images.) Beyond its extraordinary objets d’art — not just contemporary pieces, but glass artifacts as much as 3,500 years old — the museum offers a number of fascinating lectures and demonstrations, e.g., glassblowing, glass breaking, fiber optics. 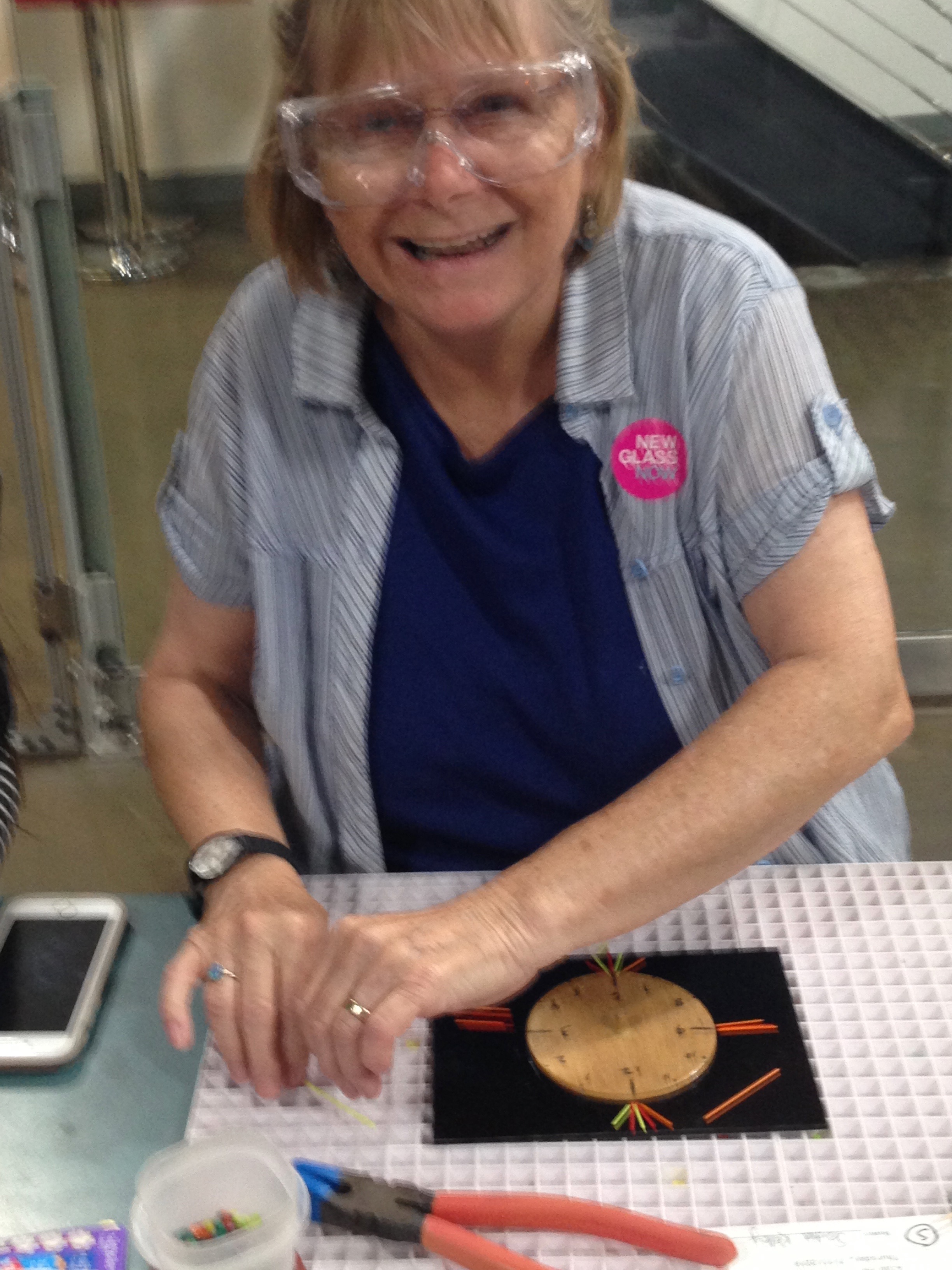 And if, like Sandra, you hanker to try creating a piece of glass art yourself, this museum is the place for you. Above is a photo of her working on a timeless masterpiece. (Well, it’s not timeless if you insert a battery!) 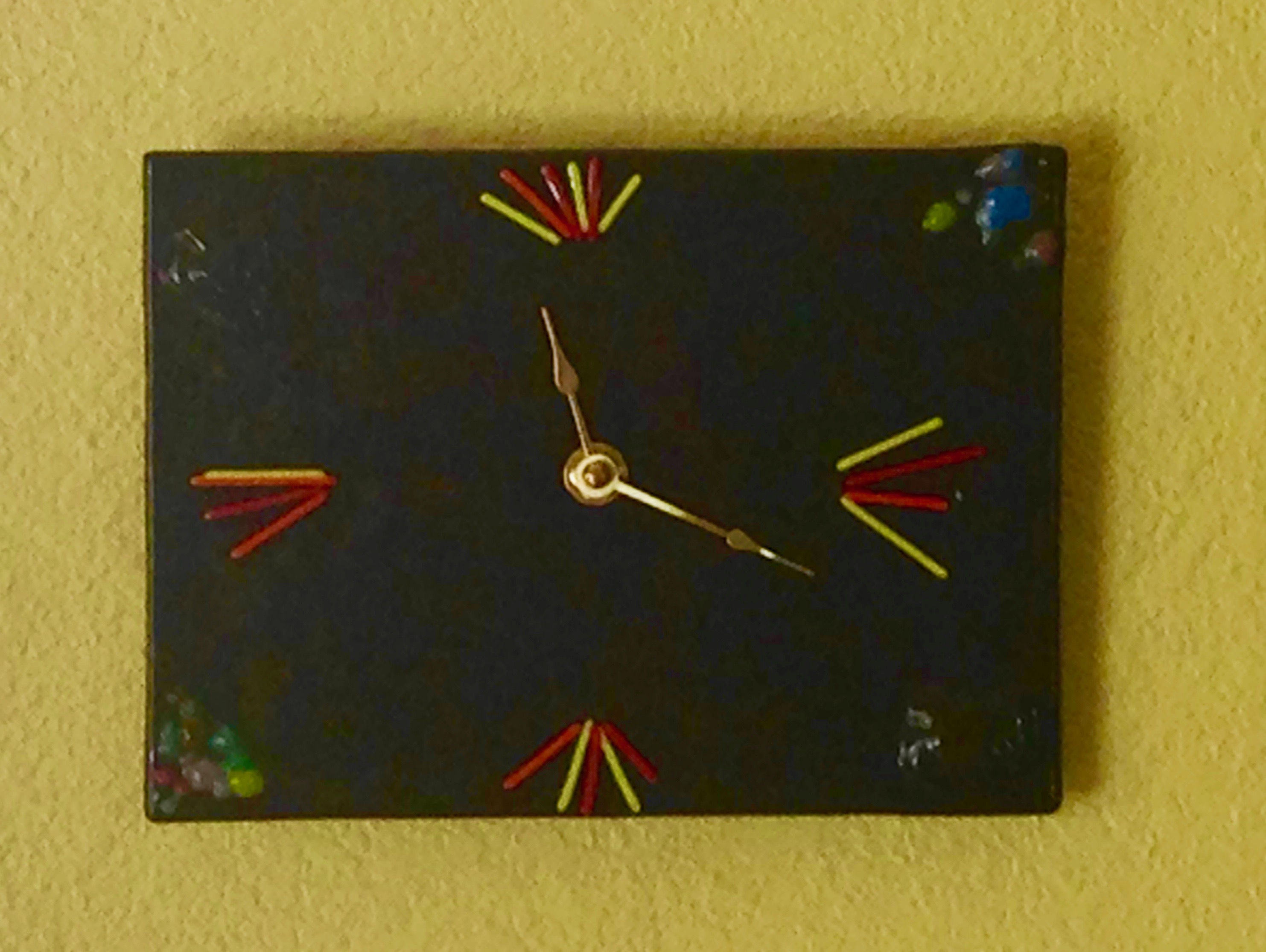 Timeless masterpiece on our kitchen wall