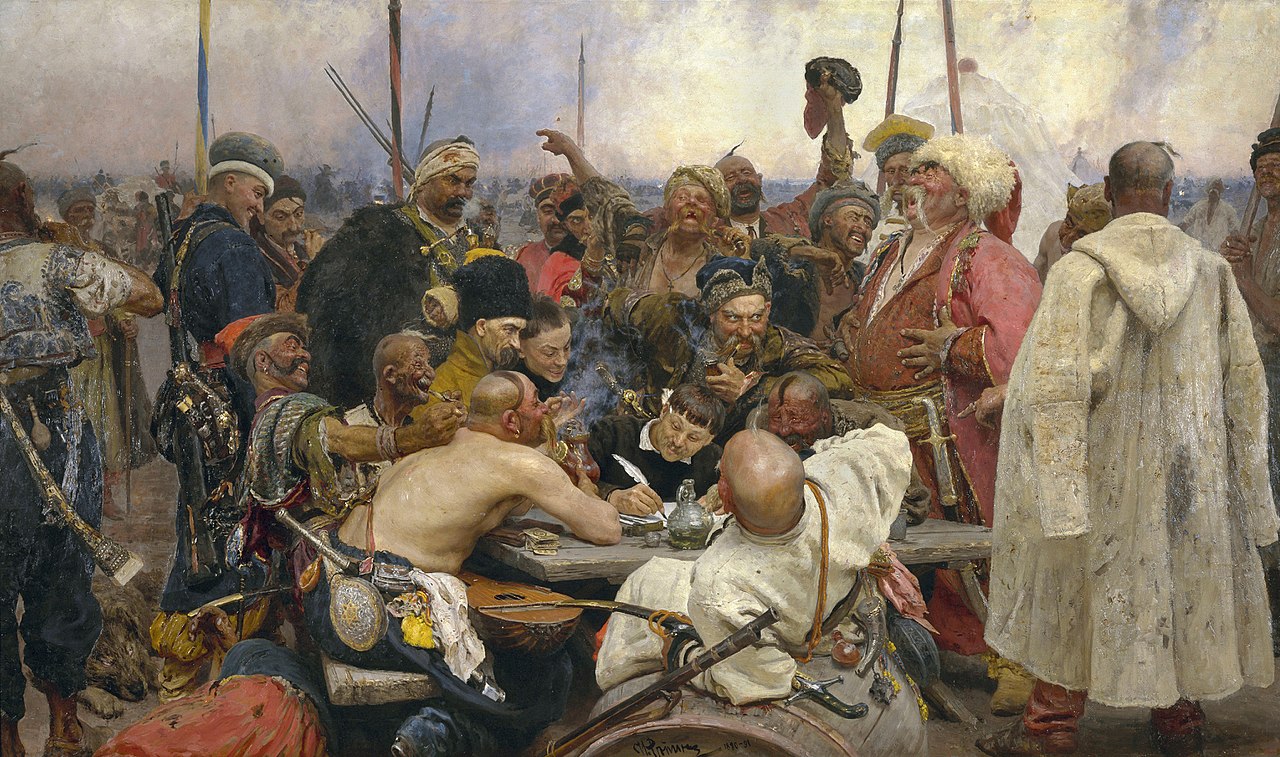 Advisory: Despite this blog’s ordinarily being family-friendly, this post is not appropriate for readers under the age of 18 (no nudity, just language).

The painting above is one of the strongest possible refutations of the notion that the study of history is dull and boring. More specifically, it’s a great example of the memorable incidents1 in Russia’s history whose retelling by Profs. Firuz Kazemzadeh and Ivo Lederer2 in my Introductory Russian History class at Yale helped entice me into my interdisciplinary undergraduate major — Russian Area Studies.

So let me tell you a little about this painting. It was created by the great 19th-century artist Ilya Repin, who took it upon himself to depict an incident that actually took place in 1676 in Ukraine, where the Cossacks had been fighting the Turks. The Ottoman sultan, Mehmed IV, had demanded the Cossacks’ surrender. A rowdy bunch better known for brutality than diplomacy, the Cossacks sent back the most insulting response they could dream up. Repin’s painting depicts the Cossacks as they concocted their scorching reply.

The Cossacks’ letter is said to have been Stalin’s favorite piece of “literature,” some of whose choicest bits he committed to memory. That ought to tell us something!

Here then, is what the Cossacks told the sultan:

Zaporozhian Cossacks to the Turkish Sultan!

You Turkish satan, brother and comrade of the damned devil and secretary to Lucifer himself. What the devil kind of knight are you, that you can’t slay a hedgehog with your bare ass? The devil shits and you and your army eat. You shall not, you son of a bitch, make subjects of Christian men; we have no fear of your army, by land and by sea we will battle you. Fuck your mother.3

You Babylonian busboy, Macedonian mechanic, brewer of Jerusalem, goat-fucker of Alexandria, swineherd of Greater and Lesser Egypt, pig of Armenia, Podolian thief, catamite [look it up!] of Tartary, hangman of Kamyanets, and fool of all the world and underworld, idiot before God, grandson of the Serpent, and the crick in our dick. Pig’s snout, mare’s ass, slaughterhouse cur, unbaptized brow, screw your own mother!

So the Zaporozhians declare, you lowlife. You won’t even be herding pigs for the Christians. Now we’ll conclude, for we don’t know the date and don’t own a calendar; the moon’s in the sky, the year with the Lord, the day’s the same over here as it is over there; for this, kiss our ass!

So, who said history is dull and boring?4

‘CorporateSpeak’ and Condescension in Business Letters

National Doughnut Day — Did It Roll Right Past You?
Scroll to top