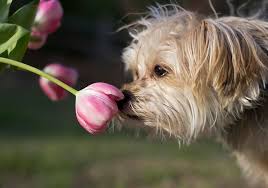 You can hardly look at your newsfeed these days without coming across something about GMOs (genetically modified organisms) or bioengineering. It’s a topic that comes in right behind Trump, climate change and gluten.

The scientists who research and create GMOs, on the other hand, point to a smorgasbord of bioengineered benefits. Here are some examples (and I haven’t made them up, honest!):

Creations like these are marvelous, as far as they go, but I wonder why the Einsteins who come up with this stuff don’t turn their creativity toward modifying organisms in ways even more beneficial to humankind. Ways of such magnificent beneficence as to eliminate the GMO controversy once and for all, bringing bioengineers and their erstwhile detractors together in a joyful chorus of Kumbaya!

With that goal in mind, here’s a humble suggestion. Inspired by the Spider Goat’s steely success, our genome geniuses ought to focus on fixing a fragment of lilac DNA into man’s best friend.

Think of the benefits: Bowser breath would carry a floral fragrance and no longer have the power to fell a lumberjack at 20 paces.

Best of all, Fido’s flatulence would no longer trigger that sudden exodus from the dinner table whenever, while lurking below waiting for falling crumbs, he stealthily emits one of his deadly “green clouds.” Au contraire! Phideaux Phart™ emissions could henceforth serve as an air freshener – 100 percent organic.

So get to work, guys and gals! Consign Buster breath and Fifi farts to the history books, and let future generations learn about these phenomena only in the context of other long-gone wonders of nature like woolly mammoths and saber-toothed bunnies.*

* Paleontologists are still searching for their fossils.

A Hero You May Never Have Heard Of
0 replies

Taking Off: Relief for the Transportation Blues
Scroll to top