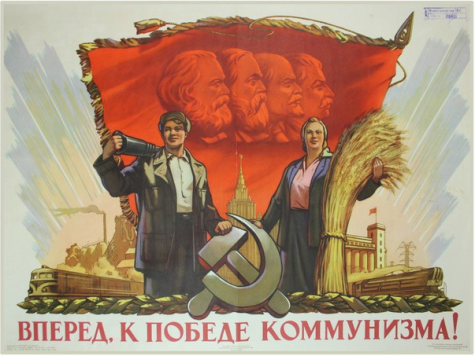 Soviet propaganda poster: “Forward. To the victory of communism!” Banner shows profiles of Marx, Engels, Lenin, Stalin. Foreground figures are idealized representations of a laborer and a collective farmer in the “workers’ paradise.”

On the eve of Labor Day, I’m reminded of an incident that took place back in early 1978, when I was posted to the U.S. consulate-general in Leningrad (today’s St. Petersburg, Russia’s second-largest city). It was on a visit to the home of Russian friends, Alyosha and Lenochka.*

As usual on such occasions, we sat and talked well into the evening over tea-and-jam, vodka and zakuski (literally, “bites”; in reality a collection of whatever tidbits hosts could rustle up in the perennially shortage-plagued Soviet consumer economy – but almost always something delicious. On the evening in question, I remember well, the zakuski included a small tin of cod livers – surprisingly tasty – which Lenochka said she’d acquired, in typical Soviet fashion, by barter, exchanging for it a copy of a beautiful book she had edited of reproductions of 17th- and 18th-century masterpieces of French painting in the collection of the Hermitage, where she worked as a curator). It should go without saying that her book was worth many times more than a tin of any delicacy in a rational economy, but was ideal for barter because it was simply unavailable to ordinary Soviet citizens as it was intended exclusively for export, where it could earn hard currency for the Soviet government.

In the course of our conversation, Alyosha, a geologist with a specialty in identifying the location of petroleum-bearing rock strata through analysis of the noble gases (helium, neon, argon, krypton, xenon and radon) present in those strata, asked about an item then in the news – a U.S. coal strike that lasted from December 1977 to March 1978. The Soviet media had been reporting it in hyperbolic terms. I recall hearing a Soviet radio report on it many of whose claims sounded outrageously fictitious to my American ears.

In any case, Alyosha had a question about the strike. “If the miners are not working, how do they manage to survive?” In responding, I mentioned the likelihood that in towns largely dependent on coal mining, stores selling food and other necessities would probably extend as much credit as possible to the strikers, who would only be expected to pay their bills after returning to work. I added that local churches and other charities might well be helping, as well as the union’s strike fund, which existed for just such a purpose. Also, I said, strikers could draw on their personal savings.

Finally, I noted that in some U.S. states, strikers could also be eligible for government unemployment benefits. When I finished, Alyosha looked at me and said, “У вас коммунизм!” “You’ve got communism!” – the long- and oft-promised “pot of gold” at the end of the rainbow of privations and suffering that was most of what the Soviet system offered its citizens in the here-and-now.**

So, to all my fellow “toilers” (трудящиеся/trudyashchiyesya – a favorite term in the Soviet lexicon) in a capitalist economy, Happy Labor Day!

* Alyosha and Lenochka, who were unhappy in the Soviet Union, managed with great difficulty and after much travail to emigrate in 1984. Lenochka wrote a marvelous book about her childhood experiences in World War II, Through the Burning Steppe. Sadly, she passed away in 2013.

** For readers unfamiliar with life and official thought in the USSR, “communism” was the goal toward which all policies and efforts of the Communist Party of the Soviet Union (CPSU/КПСС) and the Soviet government were said to be directed. Ubiquitous, relentless propaganda exhorted people to work toward the achievement of communism, which was extolled as the final stage of the progressive development of human society (from feudalism through capitalism and then socialism – the stage through which the USSR was said to be passing as it strove to “build communism”). Communism was portrayed as a kind of earthly paradise in which, as Karl Marx wrote, there would be no private property and goods would be distributed in accord with the formula “from each according to his ability, to each according to his needs.” However, the effort to reach communism, which involved the sacrifices and privations that people endured every day in the USSR, was said to be the price of reaching that goal – which, as history shows, was never (and could never be) attained. The Soviet government was no more than an instrument of the CPSU, which ran the entire country in the name of the “dictatorship of the proletariat” (the working class) – every school, preschool, university, factory, office, laboratory, retail store, restaurant, gas station, newspaper, magazine, publishing house, radio/TV station, museum, orchestra, and every imaginable cultural and social organization. The Soviet Union was a horrible place, where the rules were enforced by the secret police (the notorious KGB, which also ran the gulag) and its vast network of informers. But it was a fascinating country for an outside observer, protected with diplomatic immunity, like me.